It’s a month before the holidays and you’re grappling with a serious toy buyer’s dilemma: 0n the one hand, you kind of just want to get your kid a Barbie; on the other hand you’d rather not perpetuate the peddling of anatomical ideals that are so impossible to achieve — and impractical. (Were Barbie human, she’d have to walk on all fours because of her tiny feet and because she would only have room for half a liver.)

That’s why graphic designer turned toymaker Nickolay Lamm created the Lammily doll — what the Barbie would look like if she actually had the measurements of an average 19-year-old woman’s body (based on CDC data). And brown hair. (She also comes with a sticker-extension pack, complete with cellulite, freckles and acne, but we’ll get to that later.)

What started as an art project in July 2013 became available for purchase and delivery Wednesday. “Parents and their kids were emailing and asking where they could buy the ‘normal Barbie’ — but they didn’t exist,” Lamm, 26, tells TIME. And so he decided to crowdfund his creation, raising $501,000 for his $95,000 target goal. “To be honest, I knew it was either going to bomb or blow up, there was no in between,” Lamm says.

Lamm also created a video that transforms a Lammily doll into a Barbie to really get his point across:

“I wanted to show that reality is cool,” Lamm says. “And a lot of toys make kids go into fantasy, but why don’t they show real life is cool? It’s not perfect, but it’s really all we have. And that’s awesome.”

But real proportions and movement weren’t enough. Before putting the $24.99 dolls on sale — 19,000 dolls are going to backers, but 25,000 more are ready to be shipped before the holidays — Lamm decided to take things a step further.

Enter the $5.99 sticker-extension pack, available in January. Lamm says it took four months to find the proper sticker material, that gives the doll’s face acne, freckles, moles and the ability to blush:

Lamm also decided to include scrapes and bruises. “Some people were like ‘Oh my God,’ as if I’m promoting domestic violence or something,” says Lamm, before assuring TIME that that was far from his intention. “Look, we all get boo boos and scratches. Life isn’t perfect, we all sometimes fall down but we get back up.”

Lamm’s aunt recommended he add scars, he says, “because, you know, some kids have scars and are really shy about them.”

But then there’s the cellulite and the stretch marks:

Unleashing a doll with stretch marks on the Internet is basically asking for trouble. But Lamm insists that it came from a sincere place, and that some people will welcome the option. “Demi Lovato even tweeted about it,” he says:

“You know, people were saying this whole project was a joke from the beginning, so I have no doubt some people will take it as a joke,” Lamm says. “But I hope there are enough people who believe what I believe. I think 25% to 30% will think the stickers are stupid and the rest will think it’s good.”

The Lammily will have other fashion options in January:

“This is the doll people have been waiting for,” Lamm says. Stretch marks and all. 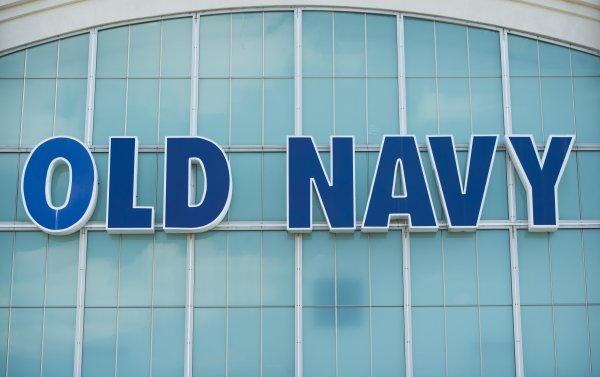 Old Navy Explains Why It Charges More for Women's Plus Sizes
Next Up: Editor's Pick