At Least Four Killed in Terror Attack on Jerusalem Synagogue

Israeli emergency personnel take the body of an Israeli man out of a synagogue after a terror attack in the neighborhood of Har Nof, western Jerusalem on Nov. 18, 2014.
Ilia Yefimovich—Getty Images
By Justin Worland

The attack, which occurred at 7 a.m., was carried out by two Palestinian assailants armed with knives and axes, in the Orthodox community of Har Nof, Israeli police spokesman Mickey Rosenfeld told CNN. Police shot and killed both of them, he added. One police officer was injured and remains in critical condition.

The attack is reported to be the deadliest attack against civilians in Israel in several years. All four of the confirmed dead were rabbis, including 59-year-old Moshe Twersky, the New York Times reports.

Prime Minister Benjamin Netanyahu said, “We will respond with a heavy hand to the brutal murder of Jews who came to pray and were met by reprehensible murderers.”

U.S. Secretary of State John Kerry urged Palestinian leadership to condemn the attack. “They must begin to take serious steps to restrain any kind of incitement that comes from their language, from other people’s language, and exhibit the kind of leadership that is necessary to put this region on a different path,” he said. 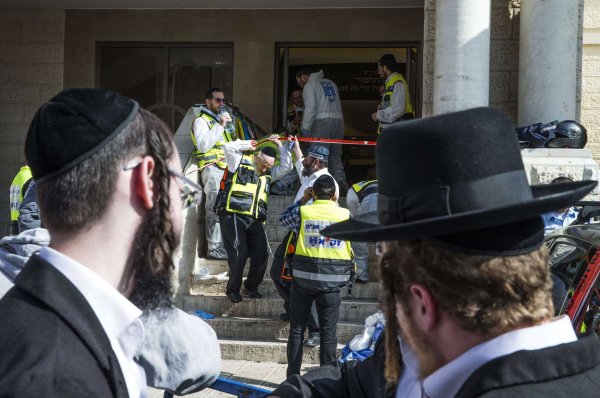 5 Die in Jerusalem Attack
Next Up: Editor's Pick