Vladimir Putin has long had a soft spot for Germany. As an officer of the KGB in the late 1980s, he was stationed in the East German city of Dresden, where he developed a love of the language and, according to his memoirs, for the enormous steins of pilsner he drank at a beer hall in the town of Radeberg with friends.

As President, Putin’s foreign and economic policies have always looked to Germany as a pivotal ally, a vital partner in trade and a sympathetic ear for Russian interests. He seemed to feel that no matter what political headwinds came his way, the German sense of pragmatism would prevail in keeping Berlin on his side. That illusion has just been shattered.

During a speech on Monday, German Chancellor Angela Merkel predicted a drawn-out confrontation with Moscow. Breaking from her normally subdued political style, she even invoked the worst years of the 20th century in describing the West’s conflict with Russia over Ukraine. “After the horrors of two world wars and the end of the Cold War, this challenges the peaceful order in Europe,” she said, referring to what she called Putin’s “old-thinking” view of Eastern Europe as Russia’s stomping ground. “I am convinced this won’t succeed,” she said. In the end, the West would win out against the challenge emanating from Russia, “even if the path will be long and hard and full of setbacks,” Merkel told a conference in Brisbane, Australia.

It was in many ways the low point for Putin’s deepening estrangement from the West. During the G20 summit of world leaders held in Brisbane over the weekend, the Russian leader was broadly ostracized by the most powerful figures at the table, and some of them were far less diplomatic toward Putin than Merkel has been. In greeting Putin on Saturday, Canadian Prime Minister Stephen Harper reportedly said, “I guess I’ll shake your hand, but I have only one thing to say to you: you need to get out of Ukraine.”

Later that day, Merkel came to the Hilton Hotel in central Brisbane for an unscheduled meeting with Putin that reportedly lasted almost six hours, running well into Sunday morning. The subject was the conflict in Ukraine, and according to the Kremlin, Putin did his best to “clarify in detail the Russian approach to this situation.” But his efforts to win Merkel’s sympathy – or at least her understanding – appear to have done the opposite. He emerged from their encounter apparently so exhausted that he decided to leave the summit early, saying he needed to get some sleep.

The letdown seemed all the more painful considering his recent attempt to reach out to the German public. A few days before the G20 summit began, Putin decided to give a rare one-on-one interview to the national German television network ARD, whose correspondent grilled him on Russia’s support for separatist rebels in eastern Ukraine. Putin tried to sound conciliatory. “Of course we expect the situation to change for the better,” he said. “Of course we expect the Ukrainian crisis to end. Of course we want to have normal relations with our partners, including in the United States and Europe.”

Particularly for Germany, he argued, it is important to work things out with Russia, because their economies are so closely intertwined. Trade with Russia accounts for as many as 300,000 German jobs, Putin said, and by going along with the sanctions that the West has imposed on Russia, Berlin risks hurting its own economic growth. “Sooner or later,” he said, “it will begin to affect you as much as us.”

The warning, more plaintive than defiant in its tone, was aimed as much at the political elites in Germany as its powerful business interests, which rely on Russia for natural resources and a huge consumer market. Last year the trade between the two countries was worth more than $100 billion, compared to less than $40 billion between the U.S. and Russia. To fuel its energy-intensive industrial base, Germany also gets a third of its oil and gas from Russia, and 14% of everything that Russia imports is made in Germany.

But Putin, for all his appeals to German pragmatism, was wrong to hope that Russia’s isolation could boomerang back on the German economy, or on Merkel’s popularity. Even as the sanctions war choked off trade between Russia and the West, Germany’s total exports reached an all-time high in September. At the same time, Russia’s reputation among the German public has been scraping bottom. In a nationwide survey conducted in August, a German pollster reportedly found that 82% of Germans do not believe that Russia can be trusted, while 70% called for tougher sanctions against the Russian economy.

“So it seems clear that Putin has miscalculated,” says Joerg Forbrig, an expert on Eastern Europe at the German Marshall Fund in Berlin. “Certainly when it comes to Germany.”

This is a costly mistake. In trying to sway Berlin, Putin pursued his best, and perhaps only, chance of breaking the West’s resolve against him. The business lobby in Germany is both more powerful and more sympathetic toward Russia than any major European state, and the German electorate has generally favored a neutral stance on foreign policy.

Just a few weeks after Russia invaded and annexed the Ukrainian region of Crimea in March, nearly half of Germans said that their government should not take sides in the conflict, while 35% urged their leaders to seek an understanding with Moscow. This core of German Russophiles now looks to have evaporated, and with it Putin loses the only Western partner that could have stopped the isolation of his country.

Many in Moscow have watched that turn in German feelings with surprise. “Even during the Cold War, we were laying [oil and gas] pipelines to Germany,” says Leonid Kalashnikov, vice chairman of the foreign affairs committee in Russia’s lower house of parliament. “Back then nobody seemed to mind.”

Under Putin, those energy links have been vastly expanded. In 2011, he launched the Nord Stream natural gas pipeline to pump fuel from Russia to Germany under the Baltic Sea. (In a sign of just how well-connected Putin was in Berlin at the time, Merkel’s predecessor, Gerhard Schroeder, took a job as chairman of that pipeline project after his term as chancellor ran out in 2005.) But at the end of September, Merkel said the European Union may need to break its addiction to Russian fuel in the long term, especially if the Kremlin’s expansionist policies continue to violate “basic principles.”

But even the threat of losing the European market – disastrous as that would be for the Russian economy – is not likely to make the Kremlin yield. “There’s one thing the West just doesn’t understand,” says Kalashnikov. “They can use sanctions to coerce a small country. But Russia is not one of them. We will not get on our knees and do as we’re told.”

Thanks largely to his own anti-Western bluster, Putin’s support in Russia now relies more than ever on his defiance toward the West, and he will sooner accept the role of a pariah abroad than weakling at home. “We’re just not going to chastise him into changing his tune,” says Matthew Rojansky, a Russia expert at the Wilson Center in Washington.

Much more likely, the West’s ostracism will “foreclose” any remaining channels for swaying Putin through dialogue, adds Rojansky. But if Putin was searching for such a channel during his night of debating with Merkel, he has come up empty-handed. It’s not clear if he has anywhere else in the West to turn.

Read next: Russia to Create Its Own ‘Alternative Wikipedia’ 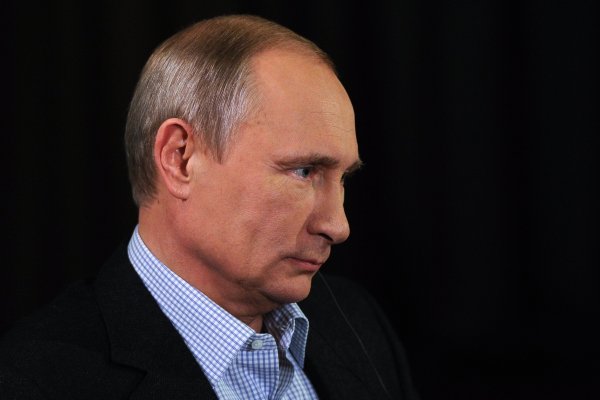 Russia to Create Its Own 'Alternative Wikipedia'
Next Up: Editor's Pick