With an ice cream cone in hand, Hillary waves to the crowd in Weedsport, New York, as she heads to the Harriet Tubman Ho
... VIEW MORE
Diana Walker—Contour by Getty Images for TIME
1 of 9
On Our Radar

An Intimate Portrait of Hillary Clinton in Photographs

Diana Walker’s skill documenting life behind the scenes in Washington D.C. stems directly from her dedication to subjects and her often subtle approach to photography.

“I was trying to be as discreet as possible,” she tells TIME, speaking about stepping into the White House to work on her latest book Hillary: The Photographs of Diana Walker, which saw her turn her lens towards Hillary Clinton.

“I hardly ever spoke unless spoken to — I was not there for myself and I wanted them to ignore me,” she adds. “I used to rewind the film looking down and away from them so that I wouldn’t catch their eye or make them think they had to speak to me.”

Walker worked as TIME’s White House photographer for 20 years, capturing five presidencies. In that time, she also documented luminaries such as Steve Jobs with the same intimacy she often portrayed in the oval office.

Starting in 1993 within the White House’s walls, Walker documented Hillary as she moved from her roles as First Lady, Senator, Presidential Candidate and, later, Secretary of State. 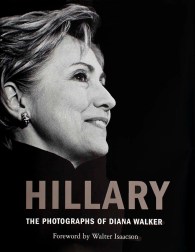 “To have the opportunity to photograph somebody for 20 years is such a gift to a photographer,” Walker says, “Hillary Clinton, it seems to me, means a lot to women today. I think that she represents the opportunities for women in our country.”

Walker photographed Clinton for TIME up until October 2011, when she captured the now-iconic photograph of the Secretary of State putting on her shades to check her phone in the belly of a military C17 aircraft. The photograph later inspired the meme Texts from Hillary.

Is she responsible for Hillary becoming an online icon of cool? “ I would love to have that reputation, ” Walker says, laughing. “I think we would all like to be cool at some stage in our lives.”

Diana Walker is a regular contributor to TIME and worked as TIME’s White House photographer for 20 years. You can see more work in her latest book Hillary and The Bigger Picture: Thirty Years of Portraits.