'The Art of McCartney': The Making of a Massive Tribute Album

Over the past two decades, producer Ralph Sall has assembled all-star albums honoring everything from Saturday-morning cartoon themes to the Grateful Dead. In 2003, he decided to embark on his biggest project yet: a massive Paul McCartney tribute record. “I never realized this would take me 10 years,” Sall says.

The Art of McCartney, a 42-track set out November 18th, took so long for a very good reason – nearly everyone Sall approached said yes. The album has one of the most impressive lineups of any tribute record ever: from Brian Wilson, who covered the 1982 deep cut “Wanderlust,” to Billy Joel (“Maybe I’m Amazed”), to Chrissie Hynde (“Let It Be”). The biggest coup of all: Bob Dylan, who rarely participates in these sorts of projects. Dylan chose to tackle “Things We Said Today.” “I was surprised he decided to take part,” says Sall. “That’s not the song I would have picked, but it sure fits him.”

Willie Nelson contributed a stark acoustic “Yesterday,” though it’s not his first time covering the song. “I recorded it when it first hit the market,” Nelson says. “I had a band in Fort Worth, and I told the audience, ‘Here’s a pretty good song I heard by a little country group called the Beatles.’ I just think McCartney is one of the best songwriters around.”

MORE: In Pics: Paul McCartney – A Life in Pictures

In most cases, Sall personally matched the song with the artist he wanted to cover it, and McCartney’s backing band – whom McCartney loaned Sall for the project – provided the backing. Sammy Hagar, who did “Birthday,” was stunned he was asked to participate. “I might have gone with ‘Let Me Roll It’ or ‘Maybe I’m Amazed,’ ” he says. “But ‘Birthday’ does fit my voice. Great guitar riff, too.”

MORE: In Pics: Behind Beatlemania: Intimate Photos of Paul McCartney 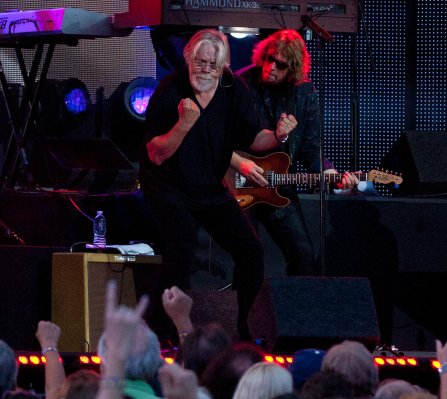 Bob Seger on Climate Outrage, His Internet-Free Life and Hanging With Eminem
Next Up: Editor's Pick