Salt is unloaded at the Scio Township, Mich. maintenance yard on Sept. 16, 2014. Some Midwest county road officials are facing price increases that are three times what they paid last year.
Carlos Osorio—AP
By Josh Sanburn

Last winter’s severe snowstorms triggered road salt shortages around the U.S., pinching supplies and forcing some transportation departments to stock up early. The result: road salt costs have doubled, and even tripled in some parts of the country, thanks to increased demand by states hoping to keep the roads clear.

From Minnesota to New York, states have had to pay premium prices for road salt this year. In Michigan, prices up are up 50%. In Indiana, they’re up almost 60%. In Missouri, some local transportation departments are reporting prices that have doubled. St. Louis, for example, is paying $112 a ton, up from $49 last year.

“Several severe winters are forcing prices upward,” says Todd Matheson, a spokesman for the department of transportation in Wisconsin, where more than four feet of snow fell in some places last week.

Wisconsin normally goes through about 500,000 tons of salt a year. But because of the potential for a repeat of last winter’s severe weather, this year the state has 564,000 tons on hand with 141,000 tons as an option to purchase. Costs are up statewide 14% compared with this time last year, averaging $69 a ton, Matheson says.

Ohio, which got unexpectedly hit with by storms over the weekend, triggering snow emergencies across the central part of the state, paid $105 a ton for a portion of the 600,000 tons of salt it currently has on hand. On average, the state paid $57 a ton compared with $38 last year.

Even with the rising prices, most states are not reporting road salt shortages. The New Jersey Department of Transportation is currently at 100% capacity (164,000 tons) and is in the process of adding 20,000 tons of storage space set to be available this winter. It can also store 716,000 gallons of liquid calcium and 150,000 gallons of brine, which is often applied to roads before a storm hits to help keep snow and ice from sticking.

One state that is running below average is Pennsylvania. The state has in store 90% of the average amount it uses during a winter, says Richard Kirkpatrick, a Pennsylvania Department of Transportation spokesperson. The average is 841,000 tons, and last year the state went through 1.2 million tons. But this year it only has 694,000 tons on hand with another 65,000 on order. And the long-range forecast? Above normal snowfall for much of the state. 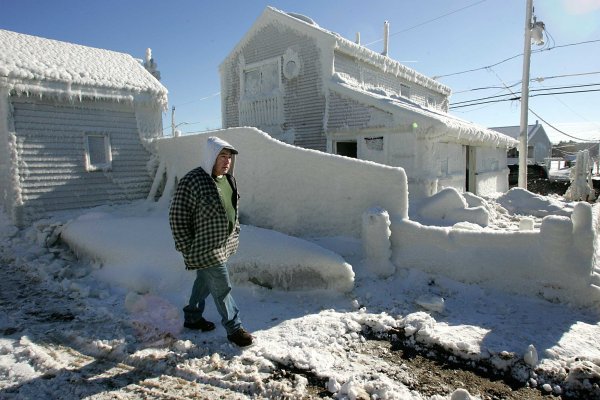 See 11 of the Worst Winter Storms in U.S. History
Next Up: Editor's Pick