Russian President Vladimir Putin plans to leave the G20 summit early after Western leaders lambasted him Saturday over the crisis in Ukraine and threatened further sanctions.

Russia has been accused of escalating military activity and supplying troops and weaponry to the insurgency in the eastern part of Ukraine, where fighting has claimed the lives of more than 4,000 people since the latest conflict began.

A Russian official told Reuters that Putin planned to skip a session on Saturday at the Brisbane, Australia summit, and would depart early in order to attend meetings in Moscow.

The choice of an early exit follows harsh rebukes from Western leaders against the Russian president at the summit.

“I guess I’ll shake your hand, but I have only one thing to say to you: you need to get out of Ukraine,” Canadian Prime Minister Stephen Harper told Putin, according to his spokesman Jason MacDonald, Reuters reports.

President Barack Obama said the United States was at the forefront of “opposing Russia’s aggression against Ukraine, which is a threat to the world, as we saw in the appalling shoot-down of MH17.” German Chancellor Angela Merkel has also said the European Union is considering further financial sanctions against Russian individuals.

Putin shook hands with host Australian Prime Minister Tony Abbott, who threatened to physically confront the Russian leader over the the MH17 incident, which had 28 Australian fatalities. 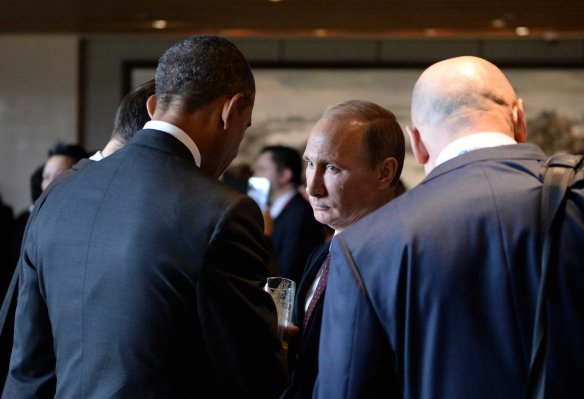 Russia Plans to Send Bomber Patrols Toward the U.S.
Next Up: Editor's Pick