Former Arcandor CEO Thomas Middelhoff waits in the courtroom of the district court in Essen, Germany, Friday, Nov. 14, 2014. Middelhoff is accused of embezzlement during his work for Arcandor and faces the verdict today. (AP Photo/Frank Augstein)
Frank Augstein—AP

Thomas Middelhoff, the former CEO of German media behemoth Bertelsmann, was sentenced to three years in prison on Friday after the disgraced executive was convicted on multiple counts of embezzlement and tax evasion, according to Reuters.

A German judge deemed Middelhoff a flight risk and sent him directly to jail, despite Middelhoff’s plans to appeal the court’s decision, marking a particularly steep fall for a man once viewed as one of his country’s most respected, media-savvy business leaders.

Starting in 2004, Middelhoff was entrusted to oversee what would become a failed turnaround for retail group Arcandor. It was in his role as CEO of that company that Middelhoff was later found to have misappropriated company funds, putting them toward such personal perks as expensive trips on chartered airplanes and helicopters between his home and Arcandor’s offices, Reuters reports. In the end, Middelhoff was found guilty of embezzling just shy of $1 million from the company, which went bankrupt in 2009 under his watch.

Before joining Arcandor, Middelhoff had spent more than a decade at Bertelsmann, whose mass media holdings include broadcast network RTL Group, music publisher BMG and a majority stake in the newly-combined publisher Penguin Random House. His time at Bertelsmann included four years as CEO, during which time Middelhoff attempted to bring the nearly 180-year old company into the Internet age while also orchestrating deals to acquire Random House and take full control of RTL.

In 2002, Fortune profiled Middelhoff in a story that chronicled Bertelsmann’s growth and noted the giant windfall the company received thanks to Middelhoff’s savvy (or, perhaps, lucky) investment in AOL Europe. The company made a profit of $7 billion selling its stake back to AOL in 2000, just before stock prices dropped precipitously.

After leaving Bertelsmann, Middelhoff also took a role as a director of The New York Times Company. He remained in that role until stepping down earlier this year for undisclosed reasons, according to the Times. 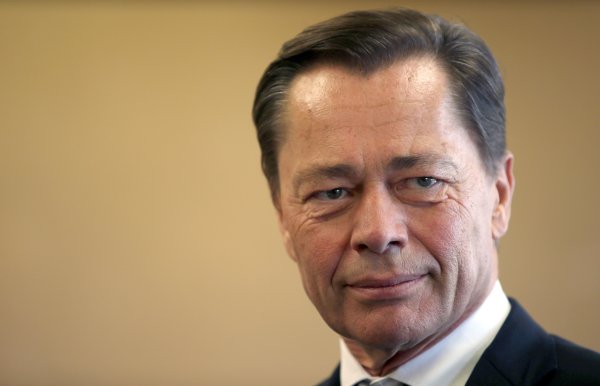