Leaders from across the world are set to gather in Australia for the G-20 summit this weekend to discuss the health of the global economy; however, tensions between the White House and the Kremlin over Russian incursions into southeastern Ukraine are casting a long shadow over the forum.

“At the G-20, I imagine the President will have a chance to see his European counterparts — Chancellor [Angela] Merkel and others — and be able to have discussions on the margins there about the situation in Ukraine,” Deputy National Security Adviser Ben Rhodes said at the Association of Southeast Asian Nations summit in Burma on Thursday.

During the past week, the Obama Administration has been particularly strident in its criticism of Russia’s fresh forays into Ukraine. At a U.N. Security Council session earlier this week, U.S. envoy Samantha Power accused Moscow of systematically undermining a two-month-old peace accord between the Ukrainian military and pro-Russian rebels.

Power’s comments followed the publication of numerous reports from European monitors confirming the movement of unmarked, heavily armed columns in separatist-held territory this week, sparking fresh fears that Russia may be helping the rebels prepare for all out conflict with Kiev.

Experts say that Russian support for the separatists shows no sign of abating, even as falling oil prices and Western sanctions continue to pummel the country’s floundering economy.

“Putin’s aggression seems to just to keep on getting greater and greater,” says John Besemeres, a professor and adjunct fellow at the Australian National University’s Center for European Studies. “This is strange behavior from someone who wants to get sanctions lifted.”

But even as Washington and Moscow continue to trade barbs over Ukraine, Putin may be privy to a harsher welcome from the Australian public. The G-20 summit in Brisbane will mark the first time President Vladimir Putin has visited Australia since the downing of Malaysia Airlines Flight 17, which killed nearly 300 people including 38 Australians.

Anger continues to simmer throughout the country over Russia’s alleged role in providing rebel forces with the sophisticated weapons system that shot down the jet, even though Moscow has denied having a hand in the downing of the flight.

In September, Australian opposition leader Bill Shorten issued several calls to ban Putin from attending the summit. Online petitions have also echoed the demand. Last month, Prime Minister Abbott threatened to “shirt-front” Putin when he saw the Russian leader at the G-20, using a term from the Australian football code that refers to the illegal making of a head-on charge to bring an opponent to the ground.

During a question-and-answer session with reporters in Canberra, Abbott called on Moscow “to come clean and to atone” for its alleged role in the downing of MH17. Keeping the agenda focused on jobs and not on Russia is going to be a tough call. 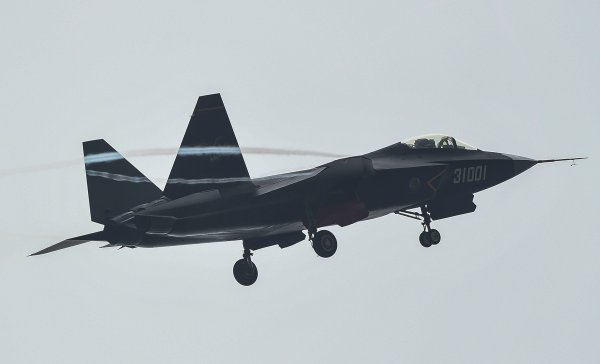 China Unveils New 'Stealth' Fighter in Show of Strength
Next Up: Editor's Pick