Alex Chow, secretary-general of the Hong Kong Federation of Students, attends a rally at the Chinese University in Hong Kong on Sept. 22, 2014
Bobby Yip—Reuters
By TIME Staff

Alex Chow, Eason Chung and Nathan Law from the Hong Kong Federation of Students (HKFS) want to ask China’s leaders to allow the Special Administrative Region to have unfettered elections for its top post of chief executive in 2017.

Beijing has allowed a popular vote but insists on first vetting all candidates through a 1,200-strong nominating committee perceived as loyal to the Chinese Communist Party. Pro-democracy activists see this as a betrayal and have paralyzed large swaths of Hong Kong for six weeks in protest.

The HKFS trio hope to discuss the Occupy movement with Chinese Premier Li Keqiang, but many doubt they will be allowed to leave Hong Kong.

The Hong Kong government, taking its cue from Beijing, views the protests as illegal. Hong Kong has been governed by the “one country, two systems” principle since Great Britain handed the territory back to China in 1997.

Businessmen are fearful of the economic impact of the protests on one of Asia’s main financial centers. Plans are already under way for police to clean diminishing protest sites on Monday or Tuesday, according to local media. 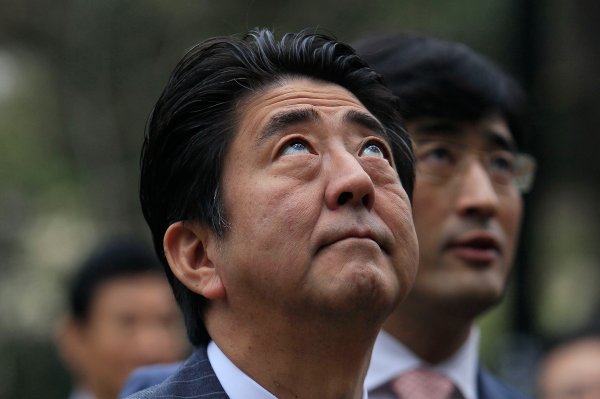 Too Late for Abenomics
Next Up: Editor's Pick