Tokyo is abuzz with speculation that Prime Minister Shinzo Abe is about to dissolve the Diet, as the country’s legislature is known, and call a snap election.

He by no means has to take such action. It has only been two years since his Liberal Democratic Party, or LDP, swept to power in a massive landslide, and the opposition is in such disarray that there is little doubt Abe would be returned to office in a new election. Nevertheless, Abe apparently feels the need for another vote of confidence from the public, likely in part to bolster support for his radical program to revive Japan’s economy, nicknamed Abenomics.

The problem is that it could already be too late. Abenomics is a failure, and Abe isn’t likely to fix it, no matter how many seats his party holds in parliament.

When Abe first introduced Abenomics, many economists — most notably, Nobel laureate Paul Krugman — believed the unconventional program would finally end the economy’s two-decade slump. The plan: the Bank of Japan (BOJ), the country’s central bank, would churn out yen on a biblical scale to smash through the economy’s endemic and destructive cycle of deflation, while Abe’s government would pump up fiscal spending and implement long-overdue reforms to the structure of the economy. Advocates argued that Abenomics was just the sort of bold action to jump-start growth and fix a broken Japan, and we all had reason to hope that it would work. Japan is still the world’s third largest economy, and a revival there would add another much-needed pillar to hold up sagging global economic growth.

However, I had my concerns from the very beginning. In my view, Japan’s economy doesn’t grow because there is a lack of demand. Pumping more cash into the economy, therefore, will not restart growth. Only deep reform to raise the potential of the economy can do that — by improving productivity and unleashing new economic energies. Unless Abe changed the way Japan’s economy works — and I doubted he would — all of the largesse from the BOJ would at best come to nothing. In a worst-case scenario, Abe’s program could turn Japan into an even bigger economic mess than it already is.

So far, Abenomics has disappointed. GDP shrank a hope-dashing annualized 7.1% in the quarter ending June. Inflation, meanwhile, is nowhere near the BOJ target of 2%, and is slowing. Nor has Abenomics brought significant benefits to the general populace. Job creation and wage increases are sluggish and, with prices increases, the welfare of the average salaried worker has suffered. Meanwhile, an increase in consumption tax earlier this year — made necessary by the need to shore up the government’s shaky finances — further burdened Japanese households and led to a drastic decline in consumer spending.

The response of policymakers has been to double down on Abenomics. On Oct. 31, the BOJ surprised markets by greatly expanding its unorthodox stimulus program, known as quantitative easing, or QE. As part of that, the BOJ will increase its annual purchases of Japanese government bonds by 60% to a staggering $700 billion. More of the same, however, will just have the same result: a short-term boost to sentiment with little lasting effect. In fact, the program is only perpetuating Japan’s bad habits. The extra BOJ cash is weakening the yen — the Japanese currency has tumbled by nearly 7% against the dollar just since the bank’s announcement — which hands Japan Inc. companies more competitiveness without forcing them to undertake any actual improvements.

The problem with Abenomics, therefore, remains the same. More yen printed by the BOJ can’t fix Japan on its own, and can’t replace the fundamental changes necessary to raise the economy’s potential growth. If anything, the BOJ’s latest action only buys Abe a bit more time to implement his pledged reform program, known at the “third arrow” of Abenomics.

So far, though, the third arrow has remained in his quiver. In June, Abe unveiled the latest elements of the plan, which included everything from lowering the corporate-tax rate to spur investment, to enlisting more women into the male-dominated workforce, and bringing further change to an unproductive and outdated agricultural sector. It would be unfair to say that Abe has made no progress on his promises. The number of working women, for instance, has been on the rise under his administration. But many important reforms remain stalled. Abe had announced the formation of “special economic zones,” which would be crucibles of experimentation with the deep deregulation necessary to spark entrepreneurship and investment, but their implementation has crept along at a glacial pace. Serious reform of the country’s distorted labor market seems to have slipped off the table. Abe is also foot-dragging on opening the economy to more competition by holding up the completion of the U.S.-sponsored Trans-Pacific Partnership free-trade pact over an unwillingness to expose Japan’s overly protected farmers to imports.

The big question is whether another election will somehow lead to faster reform. In theory, a fresh mandate could give Abe the added political clout he needs to press ahead more boldly. However, Abe already controls both houses of the Diet, so if he wanted to move more quickly on reform, he could. That has left some analysts wondering what difference an election may make. “A snap election could have the virtue of giving the government a stronger mandate as it struggles to push ahead with structural reform,” commented Mark Williams and Marcel Thieliant of research outfit Capital Economics. But since Abe’s party has already been in a strong position, “an election would not make much practical difference to his ability to get things done.”

Abe continues to insist he is a reformer and will follow through on his grand pronouncements. “Make no mistake, Japan will emerge from economic contraction and advance into new fields and engage in fresh challenges,” Abe recently wrote in the Wall Street Journal. “There is no reason for alarm.”

Alarm bells should be ringing in Tokyo, however. Even if Abe gets the “third arrow” in the air, it could still miss its target. Many of the reforms Japan needs will take years to implement. Meanwhile, the other two arrows of Abenomics may already be running their course. There was opposition within the BOJ to its latest decision to boost QE — an indication that the bank can’t be counted upon to keep the printing presses rolling forever. Nor can Abe dodge the need to stabilize the government’s debt and deficits indefinitely. The government’s debt is 240% of the country’s GDP — the largest among major advanced economies. He’s right now weighing whether or not to hike the consumption tax yet again. Imposing it could deal another blow to growth; postponing it would undermine what little credibility Abe had as a fixer of the nation’s finances.

In the end, repairing Japan requires more political will than Abe has shown. Maybe a new election will help him find it. But don’t hold your breath. 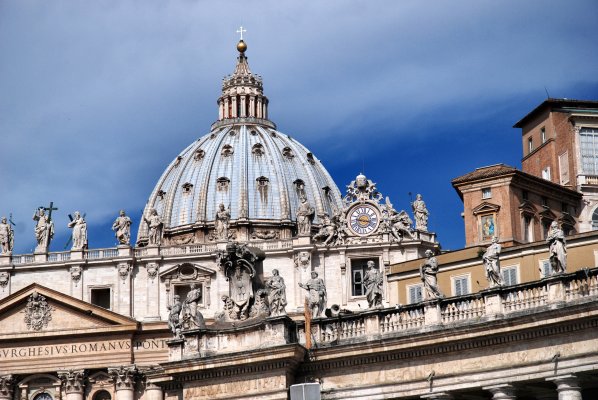 Vatican Builds Showers for Homeless
Next Up: Editor's Pick