Ohio legislators are looking to shield the identity of drugmakers for lethal injections, which are performed in the execution chamber in the Southern Ohio Correctional Facility in Lucasville, Ohio.
Kiichiro Sato—Associated Press
By Josh Sanburn

Ohio lawmakers introduced legislation this week that would keep the source of lethal injection drugs anonymous.

The House bill, which was introduced on Monday and had its first hearing Wednesday, would protect individuals and pharmaceutical companies that manufacture, compound or supply drugs for executions while keeping those involved in administering the drugs, like physicians, anonymous.

Shielding the identity of drugmakers has become a common tactic by states that have had trouble obtaining execution drugs. Many drugmakers, especially compounding pharmacies—which are not under federal oversight but have been frequently used by prison systems and departments of corrections—don’t want it publicly known that they’re working with states to carry out lethal injections, fearing backlash from consumers and anti-death penalty advocates. Several states, including Arizona, Georgia and Missouri, have secrecy laws protecting drugmakers’ identities.

In October, Ohio’s attorney general said it was unlikely that the state would perform another lethal injection without action from legislators keeping the source of the state’s drugs anonymous. That statement indicated Ohio was likely out of lethal drugs altogether, and needed the ability to reassure compounding pharmacies that their identities would remain protected if the state sought drugs from them.

In August, a U.S. district judge extended a moratorium on lethal injections in the state until January 15, 2015. The order came after the execution of Dennis McGuire, who reportedly snored and snorted on the execution table in January in a prolonged lethal injection widely considered botched. 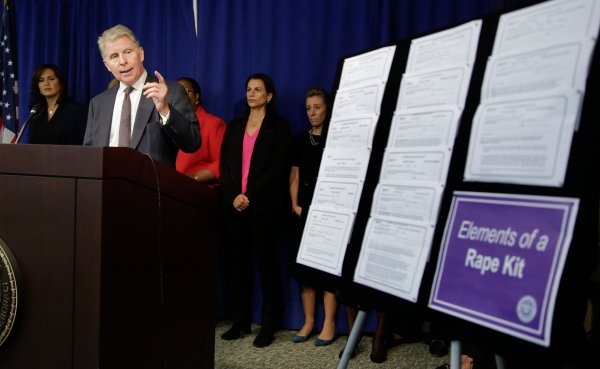 DNA Tests to Be Performed in 70,000 Rape Cases
Next Up: Editor's Pick