Review: Can't Get Much Dummer Than Dumb and Dumber To

I wish I could put as little thought into writing about Dumb and Dumber To as the Farrelly brothers did in making it.

Or maybe Peter and Bobby honed and fussed over the crude humor in the 20 years since Dumb and Dumber introduced Jim Carrey as Lloyd Dunne and Jeff Daniels as his pal Harry Christmas in a display of idiot friendship. That roughhouse farce earned nearly $250 million at the worldwide box office — about $470 million in today’s dollars — and benefitted from Carrey’s white-hot stardom; he was on a roll that began with Ace Ventura: Pet Detective and The Mask and crescendoed with his roles as The Riddler in Batman Forever (yes, that Val Kilmer movie was a hit) and the lawyer in Liar Liar. Carrey’s manic rubbery verve played nicely against Daniels’ doofus sluggishness, and handed the Farrellys a smash with their first feature.

In the intervening two decades, the major participants’ careers have cooled a few kelvins, but all are eager to apply the same deranged energy to the sequel, from a screenplay by Sean Anders and John Morris. (Their script credits include She’s Out of My League, Hot Tub Time Machine, We’re the Millers and the forthcoming Horrible Bosses 2, so their comedy IQ level is simpatico with the Farrellys.) With Carrey, now 52, and Daniels, 59, still playing the kind of 12-year-olds who’d spend most of their school days in Detention, Dumb and Dumber To opens a new trunk of pranks on the old, the blind, the morbidly obese, the physically handicapped and — the Farrellys’ primary victims — the audience.

For the 20 years since the first movie, Lloyd has been hospitalized in a coma, obliging the visiting Harry to change his friend’s diaper and urostomy bag. Surprise! Lloyd is fine, and this is his most elaborate prank. Even Harry has to admit: “The shock treatments? The partial lobotomy? That takes commitment.” The Farrellys’ commitment to stupid human tricks inspires equal awe or dread, as Harry searches for a relative to donate the kidney he needs to stay alive. Hearing that he has a daughter Penny (Rachel Melvin) by his long-ago girlfriend Fraida (Kathleen Turner), he and Lloyd visit Penny’s adoptive parents and land in the middle of martial intrigue that sends them to El Paso for a Ted-like conference of science geniuses. Cue the Stephen Hawking joke.

As an impartial reporter, I must mention what I thought were a few good laughs: 1. The lads have left their pudgy cat with a blind guy who collects parrots. After devouring them, the cat farts bird feathers. 2. Harry riffles through 20 years of old mail, opens one letter and says, “I got accepted at Arizona State.” 3. At the funeral home where Fraida works, the boys get thirsty and start drinking a blue liquid. Fraida: “That’s embalming fluid!” Lloyd: “Does it have Aspartame?” Fraida: “No.” So they gulp it down. 4. In his fantasy of fathering, Harry is sipping red wine when the 12-year-old Penny appears with evidence of her first menstrual blood. Harry helpfully offers her the wine cork.

The richest gag, which the Farrellys somehow got the MPAA classification board to participate in, is that Dumb and Dumber To is rated PG-13. That means anyone of any age can see the movie, unaccompanied by parent, guardian or enabler. Which is probably advisable for parents, since they then don’t have to explain to their kids why Fraida’s surname is Felcher, or the part of an old lady’s anatomy Lloyd’s hand is probing when she tells him she’s stashed a cache of diamonds, um, between her legs. As Harry observes elsewhere: “God’s got a pretty warped sense of humor.” God and the MPAA.

With no children to fret over, I’m not really concerned if this movie warps their fragile little minds. I just want to laugh, and Dumb and Dumber To rarely coaxed me to that state of obscene bliss. Like the Farrellys’ recent botched attempt to revive the pummeling shenanigans of The Three Stooges, this movie breaks not only the canons of etiquette but of how to make people laugh. The usual methods are wit and surprise; the brothers go for aimless, charmless shock. That may make them subversive of a high order. Or possibly filmmakers who, 20 years on, have run out of funny.

Stick around for the end of the closing credits and you’ll find a teaser for “Dumb and Dumber For — coming 2034.” Another 20 years till the next one? I can wait. 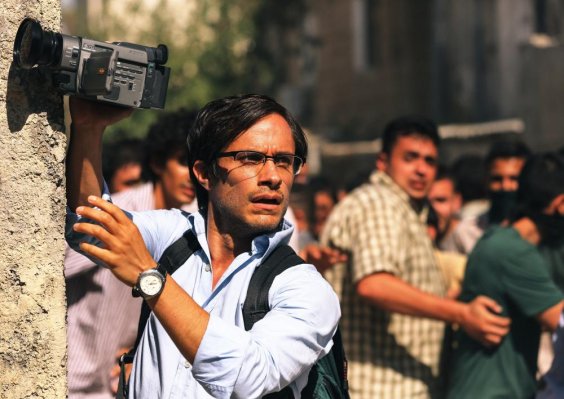 REVIEW: Jon Stewart's 'Rosewater': Laughing Through the Torture
Next Up: Editor's Pick