In the late 1970s, New York City Subway Stations were full of advertising panels covered in black paper to hide expired ads. Not many people noticed them until about 1980, when they abruptly sprouted a guerrilla-art campaign. Somebody began using them as blackboards to make chalk drawings, scenes from a manic universe of crawling babies, barking dogs, flying saucers, belligerent robots and everyman figures as bouncy as cheerleaders but as faceless as cut-paper dolls.

The drawings were anonymous at first, urban folk art in the dark forest of the transit system, but eventually their author went public. Keith Haring was a 22-year-old art student when he started making them, laying down fast lines in the minutes after one train left the station and before the next pulled in. (Or until a transit cop turned up: he was ticketed frequently and arrested more than once.) From 1980 to 1985 he made somewhere between 5,000 and 10,000 of those images. To repeat: 5,000 to 10,000. At the height of his output, riding the subway was like touring a Haring museum on a go-cart.

But unlike the work of graffiti taggers, the guys who spray-painted their street names in big letters, Haring’s subway pictures weren’t homages to himself. They were witty notes from underground, full of apprehension and apocalyptic fantasies, executed in imagery adapted from science fiction and comic books but distilled into an enigmatic language of signs. Haring surmised early that his doodleverse had potential as political art. Eventually he would produce hundreds of murals, paintings, carvings and posters to point the finger–and to give it–to apartheid, nuclear weapons, environmental degradation and Reagan-era inaction against AIDS, the epidemic that would claim his life in 1990, when he was just 31.

There’s a nicely radioactive haul of that work in “Keith Haring: The Political Line,” a show that runs through Feb. 16 at the de Young Museum in San Francisco. In the years since his death, Haring has become overdefined by his merchandise, the T-shirts and coffee mugs and such sold at the Pop Shop he opened in SoHo in 1986, which survives today as an online store. The best work in the de Young show, organized by Dieter Buchhart with Julian Cox, is a reminder that Haring could be a tougher and more credible artist than the all too ingratiating Popster he also was, somebody more than just king of refrigerator magnets.

Pop art demonstrated that comic strips and other populist forms could be source material for high art. Haring showed they could also be put to polemical ends, to serve the purposes of protest. Though he pushed his pictures into a visual language beyond graffiti, part of their appeal is that they never deny their origins, and their family resemblance to street art is a political statement in itself. He also realized that his Pop hieroglyphs worked best to channel generic and eternal anxieties about oppression–a featureless brute clubbing a featureless victim–not to construct scenes full of contemporary detail, as Mexican muralists like Diego Rivera once did. So a typical Haring was three yellow dogs trampling a hapless crowd against a backdrop of ominous calligraphy. These days there’s an echo of Haring’s ambiguous, all-purpose resistance imagery in Shepard Fairey’s obey stickers, a lot of what Banksy does and the Guy Fawkes masks that migrated from Alan Moore’s graphic novel V for Vendetta to the protesters of Occupy Wall Street.

Haring’s art shares a disadvantage with Roy Lichtenstein’s comics-derived Pop: you can think you know all you need to know about it from reproductions. Not so. His larger works have a retinal charge that announces itself only when you’re standing face to face with them. And he plainly got ideas from the all-over compositions of the Abstract Expressionists, so that in many of his biggest paintings–unframed canvases or vinyl tarps hitched to the wall by hooks or screws–hectic doings push into every corner and the eye bumps and slaloms from one to the next. The best Harings are pulsing fields.

We won’t really know how enduring his work will be until the generation for whom it’s steeped in nostalgia–guilty as charged–has passed from the scene. For now it’s hard to look at a roomful of Harings, no matter how political, without hearing Blondie trill “Heart of Glass.” Among artists who also drew on childlike or cartoon imagery, Haring never arrived at anything like the imaginative bandwidth and emotional nuance of Philip Guston or Paul Klee. Maybe he didn’t have time. But in the time he had, he took the doodle to places you would not have thought it could go. 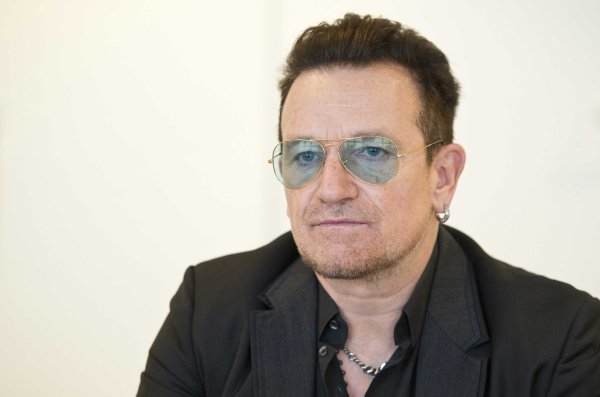 A Door Fell off Bono's Plane in Mid-air
Next Up: Editor's Pick