Grim memorial Portraits of the missing students hang in the main square of Chilpancingo, the capital of Guerrero state.
Photograph by Sebastian Liste—NOOR for TIME
By Ioan Grillo/Iguala

In the end, it took a crime that was shocking even by the standards of Mexico’s blood-soaked drug war for a semblance of order to return to a small community of 140,000 in the country’s southern Guerrero state. On the night of Sept. 26–a date now inscribed on Mexico’s calendar of historic atrocities–corrupt police and cartel thugs in the town of Iguala went on a killing spree. First they shot dead three students and three passersby, slicing the face off one victim and leaving his corpse on the street. Then they kidnapped 43 students, carting them off in police cars before reportedly throwing them into a cattle truck.

What happened next became apparent only after six harrowing weeks that saw the government of President Enrique Peña Nieto face intensifying public anger over its sluggish response to the crime. On Nov. 7, Mexico’s Attorney General, Jesús Murillo Karam, revealed that three cartel assassins had confessed to taking the students to a garbage dump, where they allegedly murdered them and incinerated their bodies in a huge bonfire kept alight for more than 14 hours with diesel, gasoline, wood and tires. The men say they packed the charred remains into plastic bags and threw them into a river. Murillo Karam told reporters that bone fragments recovered by federal agents were being sent to an advanced DNA-testing lab in Austria.

But the ramifications go beyond the unlucky students, who were training to become teachers. In the weeks before the confessions, security forces discovered corpses of an additional 38 victims of narcoviolence in Iguala, where the mayor and police are alleged to have been in league with a brutal cartel. Iguala has become a massive crime scene. As 10,000 soldiers and agents struggled to find the missing students, the stink of rotting human flesh filled the air in the hilly woodlands on the edge of town. The pits were scattered among pine trees and dirt paths–two, three, five corpses in one, the bodies burned, mutilated, decomposing.

Locals describe how a climate of fear had been building up for several years, with gangsters driving around with impunity. “The bad men would come in the night in convoys of vehicles,” says Ramiro Vazquez, a corn farmer who lives near the mass graves. “Sometimes we would hear gunshots. Sometimes we would hear screams. Of course I never called the police. Sometimes the police were with the murderers.”

The Iguala attacks shattered Peña Nieto’s efforts to clean up his country’s violent image and have sparked the biggest protests in Mexico in years, as students, teachers and others light candles, block roads and in some cases burn government buildings. “Anger about corruption and violence has been growing for a long time,” says Lorenzo Meyer, a political analyst in Mexico City. “But the attack on these student teachers is the straw that broke the camel’s back.”

The case brings together several of Mexico’s most fundamental challenges in one chilling crime. The students were the sons of peasant farmers and laborers in destitute villages that underscore the poverty that still blights Mexico’s promise. The alleged role of the police speaks to the brutality of crooked officers. Iguala Mayor José Luis Abarca–arrested in Mexico City on Nov. 4–seems, if the charges against him prove true, to symbolize the corrupt politicians undermining the country. The mass graves uncovered in the search for the students highlight the violence and injustice still pervasive in Mexico, where more than 70,000 people have been killed in cartel-related violence in the past seven years.

The bloodshed is also a reminder of the shortcomings of the war on drugs Mexico has been waging, with U.S. support. Though he talks less about the cartels, Peña Nieto has stuck with the basic strategy of his predecessor Felipe Calderón: go after the big kingpins who traffic billions of dollars in marijuana, cocaine, heroin and crystal meth to American users. Mexico has nabbed top mobsters, including Joaquín “El Chapo” Guzmán, perhaps the world’s most infamous gangster. But in their wake, smaller, more violent cells of traffickers have emerged, casting their shadow over out-of-the-way towns like Iguala.

“The drug-cartel heads used to be like monarchs,” says Mike Vigil, the former head of international operations of the U.S. Drug Enforcement Administration (DEA). “They used to run their cartels like despotic leaders. But now they are more organized like a global corporation, with subsidiaries that are semiautonomous.” The fragmentation of cartels into these vicious cells multiplies the challenges facing Mexico.

Just what triggered the latest horror remains unclear. Tucked between gold mines and gravel quarries, Iguala is a strategic smuggling town in a state where gangsters have long grown opium poppies for heroin and cultivated the marijuana known as Acapulco Gold (one of the few strains to make the Oxford English Dictionary). For years, it was the turf of a drug kingpin called Arturo Beltrán Leyva, a.k.a. the Beard, who was killed by Mexican marines working with the DEA in 2009.

After his death, gangsters in and around Iguala formed a new cartel, calling themselves Guerreros Unidos, or Warriors United. But they were largely off the DEA’s radar, their violent enterprise operating in communities far from the U.S. border.

The Warriors tightened their grip on communities like Iguala by inserting their members directly into positions of power. Federal prosecutors say Iguala Mayor Abarca, who took office in September 2012, was a key Warriors operative, laundering their money through a local emporium. He owns some 65 properties, including jewelry stores and a shopping center, according to officials.

Investigators have also named as a Warriors operative the mayor’s wife María de los Ángeles Pineda, and the cartel is said to have embedded its gunmen into the police force. “Warriors United has sewn a web of complicity with several mayors and above all with security officials,” Attorney General Karam said on Oct. 22.

The students who walked into this narco snake pit on Sept. 26 attended the Ayotzinapa university, a rural school founded after the Mexican Revolution to bring literacy to the countryside. Back in the 1970s, Lucio Cabañas, an Ayotzinapa alumnus, led one of Mexico’s biggest guerrilla campaigns of the 20th century. More recently, students have been protesting an overhaul of the education system by Peña Nieto–including new rules on how jobs are allocated–that they say threatens their employment prospects. They’ve been blocking highways and, like their ’70s predecessors, commandeering commercial buses to get to their marches. (They usually return the vehicles.)

On Sept. 26, about 120 of Ayotzinapa’s trainee teachers went to Iguala to hijack buses to travel to Mexico City, where they hoped to commemorate a massacre of students that took place in 1968. After taking two vehicles, they ran into a blockade of police officers, who began firing at them. Joining the officers were gunmen in plainclothes, later identified by investigators as cartel hit men. “There were shots coming from all directions. We were shouting that we didn’t have any weapons, but they kept firing,” says Alejandro, a 19-year-old survivor who, fearing police and traffickers, asked that his surname be withheld.

The shooting carried on in bursts at different points in the city. Police also fired into a bus of soccer players, apparently mistaking them for students. When police started shoving people into patrol cars, Alejandro ran for his life. “I was scared of being shot, but I was also terrified of being taken by these policemen,” he says. He hid in a wooded area until dawn. “I feel lucky that I am alive. But I think all the time about my companions who were taken. I don’t know what they could have been through or how much pain they could have suffered.”

What turned a bus hijacking into a mass murder remains unknown; what is certain is that the students picked the wrong town to tangle with authorities. The mayor’s wife was speaking at an event in the town center and was worried that the students would disrupt it, prosecutors say, adding that Mayor Abarca then ordered the police to go after the students.

The Iguala attack has raised fears that many other Mexican communities might have similar problems hidden away. Federal forces have begun investigating the Warriors in 13 nearby towns where the cartel operates. Several officials, including the governor of Guerrero state, have resigned as anger over the attacks grows.

The spotlight on drug violence comes as Peña Nieto attempts to show the world that Mexico is finally open for business after decades of narcocorruption hobbling its potential. Since leading the Institutional Revolutionary Party back into office in 2012, Peña Nieto has undertaken a bold program of reform, including opening up the state-controlled oil sector, to revive economic growth. He has raised the government’s tax intake and introduced a new telecom law designed to increase competition.

But the success of his reform agenda contrasts with the administration’s clumsy response to Iguala. In the immediate aftermath of the attack, Abarca moved freely around Mexico City, giving radio interviews, before going on the run for a month. It took eight days for federal investigators to assume charge of the case from their state counterparts. And even when the Attorney General claimed on Nov. 7 that the case had been solved, he bungled his announcement. Facing a grilling from reporters, he was heard saying, “Ya me canse,” or “I’m tired.” The phrase quickly became a rallying cry for protesters.

Peña Nieto held back from visiting Iguala, and it wasn’t until more than a month after the attack that he received families of the students at the presidential palace in Mexico City. Then, two days after the confessions were announced, he faced flak for flying off to attend the Asia-Pacific Economic Cooperation summit in Beijing and a G-20 meeting in Brisbane, Australia. Stopping off in Alaska on Nov. 9, he responded to the protests back home by saying that the Iguala case “is a call for justice, a call for peace and unity, not for violence and confrontation.”

The unity Peña Nieto seeks will not be easy to achieve. He has promised a new anti-corruption law, to stop officials from falling under the control of cartels. But even as the President seeks to fight graft, his office has been forced to answer questions about his family’s finances after Mexican media revealed that his wife was buying a mansion owned by a company that has won several government contracts. That company was also involved in a Chinese-led project for a $3.7 billion high-speed-train link that was abruptly canceled last week.

As such revelations fan the protests against Peña Nieto, the families of the students who went missing in Iguala await the DNA results, refusing for now to accept that their loved ones are dead. “It has been a nightmare that I can’t wake up from,” says Epifanio Alvarez, the father of one. Their distress is shared by the grieving kin of the thousands of other victims of Mexico’s cartel violence, who in the wake of the Iguala attacks are wondering when their country will snap out of its nightmare. 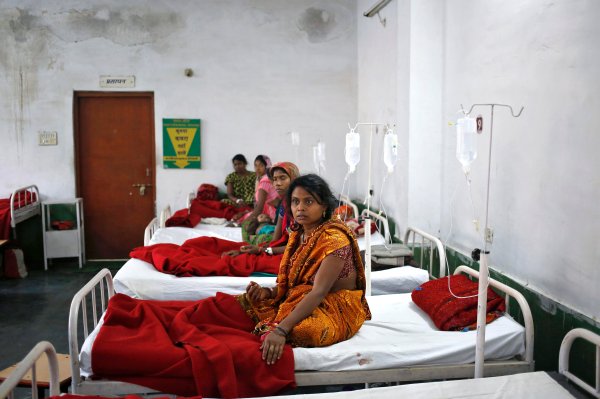 Indian Doctor Arrested After Sterilization Deaths
Next Up: Editor's Pick