Mary Landrieu did not look like a politician on the brink of extinction as she arrived at the National World War II Museum’s crowded Veterans Day get-together in her hometown of New Orleans on Tuesday. With the hulks of retired warplanes suspended overhead, the senior Senator from Louisiana made her way toward the stage through a sea of smiles, handshakes and hugs from old friends. She stopped for a chat with the New Orleans Maritime Marine Academy Band before taking a seat on stage next to the mayor, who is also her little brother.

But as the Senate Democrats’ final flag-bearer in the Deep South, Landrieu is every bit the last of an endangered political species. In a three-way contest on Election Day earlier this month, she finished first with 42% compared to 40% for Republican Rep. Bill Cassidy and 14% for Tea Party favorite Rob Maness. Landrieu and Cassidy now go head-to-head in a runoff Dec. 6, and many of Maness’ supporters are expected to back her Republican opponent.

But Landrieu is putting a brave face on it. Democrats throughout the South took an Election Day beating in part because voters saw the midterms as a referendum on President Obama, Landrieu says. With the GOP soon to be in control of the Senate, the Republican majority is no longer at stake and Landrieu hopes that fact will give her space to focus the race back on Louisiana. “We have the race that we want!” she declared after results came in election night.

The magic number for Landrieu to win that race is “30”, say campaign aides. Black voters, a solidly Democratic constituency, must comprise 30% of the electorate and she’s got to win 30% of white votes, the aides say. She has a ways to go to make those numbers. On November 4, she took just 18% of white votes—if she hopes to keep her job she’ll have to win over the rest.

To get there, Landrieu is playing up her more than 18 years as a moderate deal-maker in the Senate and her lengthy record of bringing home the proverbial bacon. Among the projects she has managed to bring to Louisiana, Landrieu reminded the crowd on Veterans Day, was the National World War II Museum in which they were all gathered.

After speeches from Landrieu, her brother Mitch the mayor, Republican Sen. David Vitter and Marine Corps Colonel Bradley Weisz (who was the only speaker all day to mention President Obama), Landrieu sat down with TIME to discuss her uphill political battle.

TIME: You mentioned after the election that this is the campaign you’ve always wanted. Why? The numbers are daunting—

Sen. Mary Landrieu: Hold on. The campaign I wanted is a campaign against Bill Cassidy. Not against the entire anger at the national government. And the first race was so much anger about gridlock in Washington, now that that race is over the Republicans have taken control of the Senate. Mitch McConnell is now going to be the Majority Leader. Barack Obama has been in some ways repudiated by the voters nationally. Not personally, but some of his policies. I think now voters here can focus on what’s best for Louisiana. So this is the race that I’ve wanted to run, between Mary Landrieu and Bill Cassidy. Running on my record against his record. And if we can get voters to focus on that I’m confident of a victory.

In recent days you’ve been highlighting things like the gender gap, the minimum wage, issues that particularly affect women.

Now, a lot of that’s been drowned out by my opponent who won’t discuss that in any way, shape or form. All he wants to talk about is the President. And, as I’ve said, I’ve now worked with three presidents, six governors and four majority leaders. The race that I want to run is a race about: Has Mary Landrieu delivered for Louisiana? And what has she done? And what kind of teams has she built? What kind of record does she have versus Bill Cassidy. If I can get that race, we will win. I will win.

With Republicans in control of the Senate is Keystone XL going to go through?

That’s a good question. We’re actually very close to getting Keystone passed right now. I’ve been working very hard on a stand alone vote on Keystone. You might think that it’ll be easier in January but you would be jumping to a conclusion that’s not yet proven, because in order to get Keystone passed, remember, it has to be passed by the House and the same bill by the Senate and then signed into law by the President. So, if you think about getting a clean bill, like my bill, like the one I have with Hoeven, it’s a Hoeven-Landrieu bill, it has 45 Republican co-sponsors plus a few Democrats. A clean stand-alone Keystone bill could potentially pass right now.

So when you ask me is it going to be easier, I can’t say yes because in January the Republicans may put a bill together with Keystone and let’s say five other things. See that? And then it passes the House and then it fails in the Senate, or it passes the House, the Senate and the President vetoes it. So my answer is: it is possible right now, right now, I think, to get a clean Keystone bill passed that the President to the United States could actually sign.

You were chatting with the kids in the Marine band over there. What were you talking about?

Well, I’m a huge supporter of the creation of this school. I’ve led the fight here in Louisiana on charter schools. I’m an elected leader on public charter schools. I’ve helped to create more charter schools per capita than anywhere else in the nation. So I visit them frequently and I was just saying that I’ll be there to see them again. Their school is growing. As I said in my speech, we have two charter military schools, first in the nation, and we’re really proud of that. The Pentagon and the military are really interested in using that model all over the country for other schools. 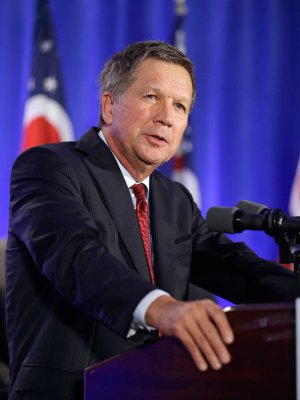 Kasich Takes the Stage
Next Up: Editor's Pick