Experts Are Skeptical Over the U.S.-China Emissions Deal

People wearing masks walk on a street amid heavy haze and smog in Beijing on Oct. 11, 2014
Kim Kyung Hoon—Reuters
By David Stout

During a press conference in Beijing, President Obama lauded the pact as a “historic breakthrough.” Likewise, in an editorial published in the New York Times, U.S. Secretary of State John Kerry said that the U.S. and China were “determined to make lasting progress on an unprecedented global challenge.”

But now comes the hard part.

Under the deal, the U.S. must slash carbon emissions by 26% to 28% below 2005 levels by 2025, and China must start reigning in its release of greenhouse gases nationwide. Based on the initiative, China needs to hit peak CO2 emissions by 2030.

In addition, China, which has long relied on coal to fuel its unprecedented economic growth, also promised to rapidly increase the country’s reliance on nonfossil fuels in primary energy consumption. By 2030, Beijing is aiming to have 20% of the country’s energy needs supplied by zero-emission sources.

But to hit these targets, experts argue that both nations must now draw up and enforce unprecedented policies.

As Sam Roggeveen, of the Lowy Institute for International Policy in Sydney, pointed out in a blog post published on Wednesday, the U.S. will have to “double the pace of its carbon pollution reduction to meet the new target.” Domestic politics could easily put a brake on that.

In China, Roggeveen writes, “an additional 800-1,000 gigawatts of nuclear, wind, solar and other zero emission generation capacity” must be deployed by 2030 — more than all the coal-fired power plants that exist in China today. Otherwise the goal can’t be met.

Even if the central government had an all-consuming drive to achieve this, economists say it must provide the proper economic incentives to local bureaucrats who are pivotal to executing policies on the ground.

“The feasibility of doing [this] depends on the local bureaucrats, so if the local bureaucrats resist then nothing can be done,” Xu Chenggang, professor who is a specialist in China’s economic development at the University of Hong Kong, tells TIME. “[It doesn’t] matter how strong the leader is, to get things done really depends on incentives.”

Xu explains that China’s three decades of robust economic expansion were only possible because local officials were able to profit from the country’s rapid transformation into an industrial powerhouse. However, questions remain over whether there will be as much money to go around during a transition to a greener economy.

“In turns out it’s very, very difficult to find a scheme which is going to give local bureaucrats sufficient incentives to take care of their environment,” says Xu.

And even then, activists say the world’s two largest emitters of CO2 have yet to commit to the types of policies needed to reverse the effects of climate change.

“There is a clear expectation of more ambition from these two economies whose emissions trajectories define the global response to climate change,” says Li Shuo, a senior climate and energy campaigner for Greenpeace East Asia in Beijing. “Today’s announcements should only be the floor and not the ceiling of enhanced actions.”

Still, others are hopeful that the historic announcement today will at the very least inject some momentum into the push to lower greenhouse-gas emissions worldwide.

“This is an important development, not so much because of the details,” explains Jim Falk, a visiting fellow at the United Nations University Institute for the Advanced Study of Sustainability in Tokyo. “It states a desire by US and Chinese leaders to add serious momentum to a global agenda to cap and reduce greenhouse-gas emissions.”

— With reporting by Per Liljas and Helen Regan 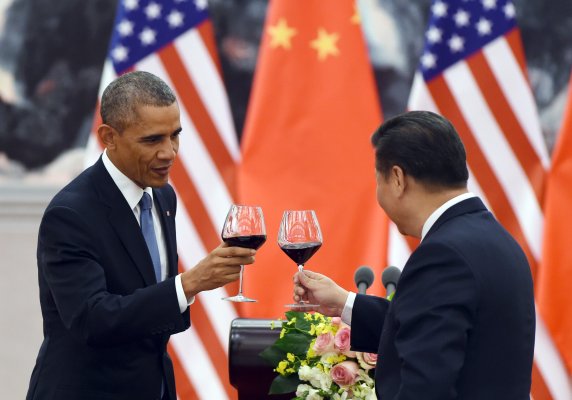