Despite Midterm 'Wave,' Americans Not Particularly Thrilled About GOP Control

Looks like the “meh” election has yielded the expected reaction from the American public. Less than half of Americans are happy to see Republicans take control of Congress, according to a new Pew Research Center survey, and about the same proportion think the Republican “wave” will lead to legislative success.

Republicans have been promising Washington will “function” with the GOP in control of Congress, but Americans in general foresee more of the same over the next two years.

Nearly six-out-of-ten say things will change either “some” or “a lot” with Republicans in control, but when it comes to the partisan divide 55% of Americans expect nothing to change. Almost half of all Americans think Republicans will see their programs passed into law, while 40% disagree.

Following the bevy of Republican wins that guaranteed Sen. Mitch McConnell will likely be the Senate’s next Majority Leader, the Kentucky Republican joined House Speaker John Boehner in touting the myriad legislation they’ll push through Congress. “Now we can get Congress going,” boasts their joint op-ed, published in the Wall Street Journal.

However, Americans are less hopeful that the switch in party control will lead to Washington suddenly functioning. When it comes to legislation Republican leadership is eager to take the lead on, support among Americans is falling. About 51% disapprove of the Affordable Care Act, but detractors are split on how best to handle the President’s signature health law. A whopping 83% of Republicans support building the Keystone XL pipeline, but over the past year support among Democrats has fallen by 11 points. What’s more, Americans are worried Republicans will use their new-found footing in Washington to increase investigations into the White House and Democrats — following a similar pattern of concern expressed when the balance of power shifted. In 2006, according to Pew, Americans had a similar fear when Democrats took control during the final George W. Bush years.

But Americans don’t think Obama would do a better job fixing the nation’s problems than Congress. In 2010, at least 49% of Americans wanted Obama to take the lead on addressing major issues. In 2014, however, nearly equal percentages of Americans would like to see Congress (41%) and Obama (40%) at the helm.

Americans also doubt the President can accomplish much during his last two years in office; the bulk, 59%, say he’ll get little to nothing done — two percentage points less than those asked the same question at the same point in Bush’s term.

Pew surveyed 1,353 adults for this latest report, which was conducted between Nov. 6 and Nov. 9. It has a margin of error of plus or minus 3.1 points. 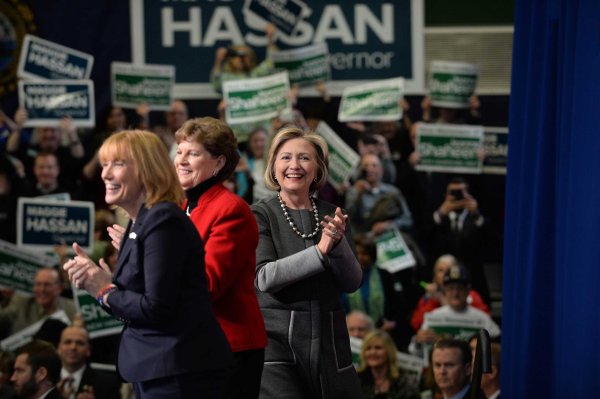 Exclusive: Women Turned Out for Hillary in the Midterms
Next Up: Editor's Pick