Hinterhaus Productions—Getty Images
Ideas
By Dean Ornish, MD
Dean Ornish is Founder and President of the non-profit Preventive Medicine Research Institute and Clinical Professor of Medicine at UCSF. He is the author of The Spectrum and five other bestsellers. He is a leading researcher in how comprehensive lifestyle changes may reverse heart disease and other chronic illnesses without drugs or surgery and may even begin to reverse aging at a cellular level.

“This Is What a Holy Sh*t Moment for Global Warming Looks Like,” according to a headline on Mother Jones.

Two studies in the journals Science and Geophysical Research Letters reported that major glaciers that are part of the West Antarctic Ice Sheet appear to have become irrevocably destabilized. The collapse of these major glaciers now “appears unstoppable,” according to NASA.

An article in the current issue of the Journal of the American Medical Association states, “Health is inextricably linked to climate change,” including respiratory disorders, infectious diseases, water-borne diseases and mental health disorders.

Warmer oceans mean that sea levels will rise more than 3 feet in 200 years, or less, eventually triggering the collapse of the rest of the West Antarctic Ice Sheet. When the ice sheet is gone, sea levels will rise between 9 and 15 feet, which will, over time, displace millions of people worldwide from the most vulnerable coastal regions. A major UN report issued last week stated that global warming could cause food shortages, mass extinctions and flooding of major cities.

Secretary of State John Kerry called global warming “the world’s most fearsome weapon of mass destruction.” This coastal dislocation could lead to conflict over food and water, escalate regional and ethnic tensions and eventually lead to a major threat to our national security.

It’s easy to feel overwhelmed, depressed, even nihilistic—”What can I do as one person to make a meaningful difference?” These feelings can lead to paralysis at a time when we need more than ever to take action.

All transportation worldwide generates only about 13.5% of carbon dioxide contributing to global warming, according to a report from the Food and Agriculture Organization of the United Nation. Eating meat, on the other hand, is responsible for at least 18% of carbon dioxide. Livestock also accounts for 37% of all the human-induced methane (which is 23-72 times more toxic to the ozone layer than carbon dioxide) and 65% of nitrous oxide (which is 296 times more toxic). And according to a more recent analysis by Worldwatch Institute, an independent environmental research institute, eating livestock and their byproducts may account for as much as 51% of global warming (at least 32.6 million tons of carbon dioxide per year).

Nitrous oxide and methane mostly come from manure, and 56 billion “food animals” produce a lot of manure each day.

The United States maintains more than 9 billion livestock, which consume about seven times as much grain as the entire U.S. population. Livestock now use 30% of all land worldwide and are causing deforestation, particularly in the Amazon, where 70% of forests are now used for grazing.

So, besides displacing land that could be used to grow food for humans, “more than half of U.S. grain and nearly 40% of world grain is being fed to livestock rather than being consumed directly by humans,” according to David Pimentel, professor of ecology in Cornell University’s College of Agriculture and Life Sciences. That would feed a lot of hungry people.

It also takes significantly more energy to produce a unit of food higher on the food chain than a plant-based diet. To produce a quarter-pound burger with cheese takes 26 ounces of petroleum and leaves a 13-pound carbon footprint. This is equivalent to burning 7 pounds of coal, according to author and journalist Michael Pollan.

One-third of the water footprint from worldwide agriculture comes from the production of animal products, and one-third of that footprint is from beef, according to a report from the Institute for Water Education. Producing a pound of beef requires almost 2,000 gallons of water. Meanwhile, California is suffering from a major drought.

Also, more than 75% of the $2.8 trillion in annual U.S. health care costs go toward treating chronic diseases, which can be largely prevented and even reversed by eating a plant-based diet, at a fraction of the cost—and, unlike drugs and surgery, the only side-effects are good ones.

More than 37,000 men from the Harvard Health Professionals Follow-Up Study and more than 83,000 women from the Harvard Nurses Health Study were followed for almost 3 million person-years. Consumption of both processed and unprocessed red meat was associated with an increased risk of premature mortality from cardiovascular disease, cancer and type 2 diabetes.

And it’s not just the arteries in your heart that get clogged on a diet high in red meat. Erectile dysfunction—impotence—is significantly higher in meat eaters. In men 40 to 70, over half report problems with erectile dysfunction. But the Massachusetts Male Aging Study showed that eating a diet rich in fruit, vegetables, whole grains and fish — with fewer red and processed meat and refined grains — significantly decreased the likelihood of impotence.

Finally, eating a plant-based diet is a more compassionate way to eat. Each year, the U.S. grows and kills about 10 billion livestock animals, according to an analysis of USDA reports by the nonprofit Farm Animal Rights Movement.

At a time when one in four children in the U.S. lacks access to enough food for a healthy life and some 800 million people in the world suffer from hunger or malnutrition, choosing to eat more plant-based foods and less red meat frees up resources for ourselves, our loved ones and our planet.

When we realize that something as primal as the food that we choose to eat each day makes such an important difference in addressing both global warming and personal health, it empowers us and imbues these choices with meaning. If it’s meaningful, then it’s sustainable—and a meaningful life is a longer life.

It’s not all or nothing. Start with a meatless Monday (or Tuesday or Wednesday). To the degree you move in this direction, there is a corresponding benefit.

You’ll look better and feel better, have hotter sex and a cooler planet.

Dean Ornish is Founder and President of the non-profit Preventive Medicine Research Institute and Clinical Professor of Medicine at UCSF. He is the author of The Spectrum and five other bestsellers. He is a leading researcher in how comprehensive lifestyle changes may reverse heart disease and other chronic illnesses without drugs or surgery and may even begin to reverse aging at a cellular level. 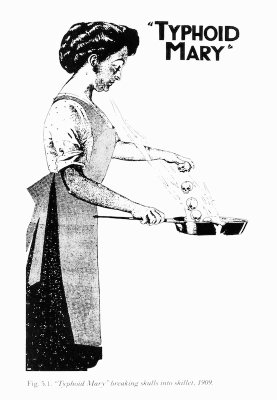 Refusing Quarantine: Why Typhoid Mary Did It
Next Up: Editor's Pick