Pakistani Schools Observe 'I am Not Malala' Day

Malala Yousafzai of Pakistan delivers a statement after winning the Nobel Peace Prize in the Library of Birmingham in Birmingham, England on Oct. 10, 2014.
Facundo Arrizabalaga—EPA
By Dan Kedmey

A federation of private schools in Pakistan has observed a day of protest against the children’s rights activist Malala Yousafzai, claiming her book offended Islam.

The All Pakistan Private Schools Federation observed an “I am not Malala day” on Monday with press conferences, seminars and marches against Yousafzai, the Express Tribune reports. The federation’s president, Mirza Kashif Ali, denounced Yousafzai’s book, I am Malala, and its criticism of official bans against against novels considered to be offensive to Muslims, including works by Salman Rushdie and Taslima Nasrin. 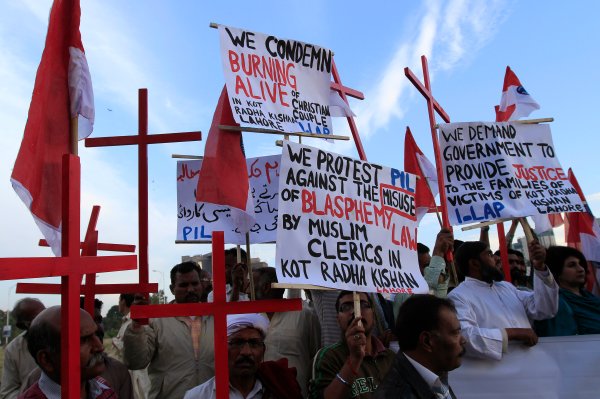 Pakistani Man Hacked to Death by Cop
Next Up: Editor's Pick