The APEC Summit Closes With a 'Historic' Climate Deal Between the U.S. and China

U.S. President Barack Obama, left, toasts with Chinese President Xi Jinping at a lunch banquet in the Great Hall of the People in Beijing on Nov. 12, 2014
Greg Baker—AP
By Emily Rauhala / Beijing

On Nov. 9, the eve of President Obama’s arrival in Beijing for the Asia Pacific Economic Cooperation (APEC) summit, a bright moon climbed across a dark sky. This took months of staging: to clear the air for arriving dignitaries, the government closed factories, cut traffic and ordered workers home. But by the time Obama and China’s President Xi Jinping sat down to dinner on Nov. 10, the smog was back, and the moon rose, as it usually does, through a toxic pall.

And so went the summit: days of diplomatic murk punctuated by carefully created blue sky. The highlight was the announcement, on Nov. 12, of an ambitious Sino-U.S. plan to curb emissions to tackle climate change. The agreement, which was the result of months of negotiations, includes new targets for the U.S. and China’s first-ever commitment to stop emission growth by 2030. The broader goal is to “inject momentum” into efforts to negotiate a new global pact on emissions in Paris in 2015.

In a joint press conference, President Obama hailed the accord with China as a “historic agreement” and a “major milestone in the U.S.-China relationship.”

The past few years have been tough on those ties. China bristled at U.S. plans to “pivot” to Asia; the U.S. is unhappy with China’s assertive posture on various territorial disputes, as well as on human rights and trade. All this, says Cheng Li, a China expert at the Brookings Institution, has created a “difficult atmosphere for U.S.-China relations.”

The strategy seems to be to find ways to collaborate on issues of common concern while steering clear of the more contentious stuff. In addition to the landmark emissions goals, the U.S. and China reached an understanding on tariffs for technology products, and a military accord aimed at preventing clashes in the disputed waters of the South China Sea.

Xi, in a rare appearance before the press, said China would “make our due share of contribution” to peace and stability in the region. “Both President Obama and I believe that when China and the United States work together we can become an anchor of world stability and a propeller of world peace,” he said.

“Counter to the heated rhetoric over the last few years, U.S.-China relations show more signs of cooperation than confrontation right now,” says Yun Sun, a senior fellow at the Washington, D.C.–based Stimson Center. “The key question is, does this adjustment reflect a change in foreign policy in the longer run?”

And that, of course, is very complicated. The last time it hosted APEC, in Shanghai in 2001, China was an emerging market and still finding its way geopolitically. Now China is the world’s second largest economy and a coming superpower. It deals with the U.S. as an equal.

At APEC, both Washington and Beijing pushed for different trade agreements, with the U.S. pushing the Trans Pacific Partnership, which excludes China, and Beijing backing its own Free Trade Area of the Asia Pacific. China also used the run-up to the summit to announce $40 billion for infrastructure development along what it calls the new Silk Road — a network of railways and airports across Central Asia.

“This is a message for the U.S.,” says Bonnie Glaser, senior adviser for Asia at the Center for Strategic and International Studies in Washington, D.C. “China wants to be at the center of economic life in the region.”

Political differences are also acute. The U.S. and its allies, including Japan and the Philippines, are no closer to accepting China’s territorial claims than before. Beijing still seems to think the U.S. and other unspecific foreign forces somehow have a hand in the pro-democracy protests in Hong Kong. And the ruling Communist Party refuses to budge on visas for reporters from the New York Times and Bloomberg, who have been given the cold shoulder since running stories about the wealth of China’s top leaders, including Xi.

At the Nov. 12 press conference to close out the meetings, the talk of cooperation was undercut somewhat by awkward exchanges. Xi, unaccustomed to questions from the foreign press, first ignored a question from a Times reporter about the visa issue, turning instead to a reporter from the state-controlled China Daily. After reading a response to the China Daily, he returned to press access, sort of.

“In Chinese,” he said, “we have a saying: The party which has created the problem should be the one to resolve it. So perhaps we should look into the problem to see where the cause lies.”

So much for blue skies and sunshine.

Read next: Time for Change on the Climate 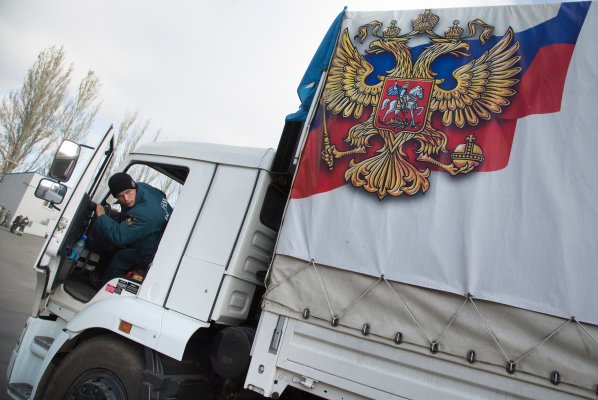 Russia Sends More Convoys to Ukraine
Next Up: Editor's Pick