When you tell people the subject of High Maintenance–the stories of a Brooklyn pot dealer and his clients–they can get the wrong impression. This fantastic online series, debuting three new episodes on Vimeo Nov. 11, is a comedy involving pot, but it’s not a pot comedy. It’s not stoner humor, like Harold and Kumar or even its closer analog, the choom-heavy Broad City. The stories tangentially involve marijuana, but marijuana is rarely the story itself.

Instead, the gemlike little tales anthologized in High Maintenance are about the reasons a character might smoke pot, which are myriad. Stress. Boredom. Illness. A date. Sadness. Celebration. Loneliness. Too much togetherness.

Or, let’s say, the end of the world. In the first episode of the new season–is “batch” the better word? “stash”? “crop”?–a young couple are going through the typical motions of white-collar urban life (work, barbecues with friends, lots of web surfing in their Fort Greene apartment) when one of them develops an obsession with survivalism. Maybe it’s the aftermath of Sandy, maybe it’s the zeitgeist, maybe it’s a way of feeling in control in his life. But one way or another, meal rations are purchased, survivalism lessons are taken, nerves are eventually frayed, and the couple decide to place a call to The Guy.

The Guy–the small-time pot dealer played by Ben Sinclair–is the one constant between High Maintenance episodes. Sinclair plays him with deceptively chill goofiness, but he also has a sneaky emotional intelligence that allows him to serve as kind of low-key confidante/bartender/therapist to his clients. (Sinclair writes, directs and edits each episode together with his wife, Katja Blichfeld, in an appropriately small-batch DIY artisanal enterprise. About which: the new videos are on demand for $1.99 each, or $7.99 for a bundle that will include three more earlier next year. Like The Guy, High Maintenance prefers to distribute in small quantities.)

Beyond that setup, every episode of High Maintenance can be what it needs to: there’s a new story each episode, which vary from six or seven minutes to around nineteen. (You can find older episodes, made before the show’s on-demand deal, for free on Vimeo.) A few characters recur, others disappear, but there is always The Guy, summoned on speed-dial, to help them maintain their high–or simply to help them maintain.

You’re probably sick of hearing about how a new show is “unlike anything else,” but the only close comparison to High Maintenance in series TV is Louie–whose “Fat Girl” monologue gets an on-point shoutout in the second episode–at least, in Louie’s self-contained, short-film-like segments. Like Louie, this is a series in sardonic love with New York City, but a different one: brownstone Brooklyn, which it shoots in vibrant color, and the freelancers and thought-industry workers who fill it, like Portlandia characters taken more seriously.

Despite the brief running time, each episode has a leisurely, languorous feel, which echoes the unhurried lives of its characters. They’re young and relatively unburdened, or older and unattached, working odd hours, adults with time to adopt intense hobbies (magic, birdwatching), watch TV online and nurse neuroses. (Emphasis on the latter; these people are, adjectivally, high-maintenance.) If High Maintenance were a person, it would be hanging out at Gorilla Coffee on a weekday afternoon, and if its characters were real people, they would watch High Maintenance. Their conversation topics are demographically GPS-precise–arguments about Vice News and Scandal, comparing vacation notes on Tulum, Mexico.

I don’t want to spoil too much story in the new episodes, partly because there’s less than an hour’s worth of them, partly because (again like Louie) their pleasure derives from how they amble along flâneur-like, taking side trips and conversational detours, until a plot develops almost without your noticing it. And yet each episode is tightly, often ingeniously plotted; they range from sweet romance to urban satire to comedies of manners, and each delivers more depth of character than TV episodes three times as long.

To blow one tiny detail, the third episode opens with a woman in a self-defense class, fighting off an “attacker” in a padded armor suit. She’s foregrounded, you can see the potential for a story developing about security and the city–why is she taking the class?–until the scene changes and you realize the episode is, in fact, not about her but about the guy in the padded suit.

It could have gone either way, I’m sure. (Indeed, some of the new episodes involve peripheral characters from previous seasons.) Part of the beauty of High Maintenance’s richness of detail and its specific sense of even the smallest character is that it makes you believe that any character in any scene could be the star of the story.

After all, as far as each of us is concerned, we’re all protagonists. Each of us has something we’re trying to escape, which ultimately is what The Guy sells. The genius of this show is how it uses its high-concept–so to speak–premise to get at something universal. If High Maintenance is aware of one thing, it’s this: The high is easy. It’s maintaining that’s tough. 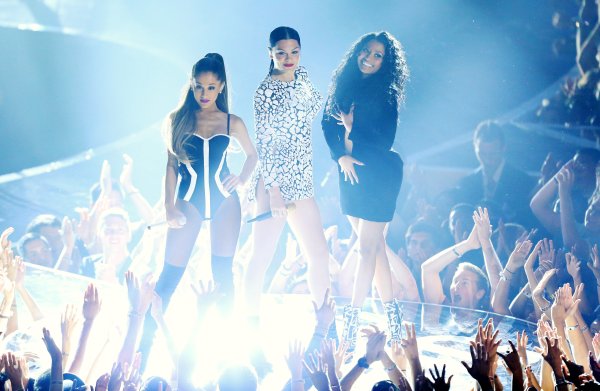 Ariana Grande and Jessie J Will Remake Brandy and Monica's 'The Boy Is Mine,' Producer Says
Next Up: Editor's Pick