Can the Republicans Save MSNBC?

If American liberals need one more thing to feel bad about after the midterm elections, Michael Wolff, writing in USA Today, has a suggestion: MSNBC’s ratings are in the dumps. The network, which Leaned Forward to become a kinda-sorta analog to Fox News on the progressive side during the early Obama era, has seen its numbers decline like the Democrats’ in the Senate:

By my read, Wolff is not so much arguing that viewers are voting against MSNBC in a political sense as saying that, with the Obama administration six years old, under attack and in its lame duck phase, there’s no excitement anymore in the Obamaism of Rachel Maddow and company. And with the thrill, the energy, the sense of forward momentum, goes the desire to watch. Its progressive audience may not be changing their views, but some are demonstrably changing the channel.

I don’t find much to disagree with in Wolff’s analysis so far as it goes. But I am surprised that Wolff, a scholar of all things Fox and Murdoch, doesn’t point out the analog to MSNBC’s slump: Fox News, at pretty much exactly the same point in the George W. Bush presidency.

Around this time in 2006, Fox’s ratings were down, while CNN and MSNBC’s were rising. And there were plenty of analyses–I wrote some of them–that in part, this may have been because the Fox lineup, ascendent on the early post-9/11 era, was feeling tired and malaised. It couldn’t have been that much fun for conservative hosts to defend Bush after Katrina and around the punishing midterms. Nor, it seemed, was it as much fun for the conservative fanbase to watch. As I wrote in early 2008:

And then came one of the best things ever to happen to Fox News: Barack Obama. With the election and Obama’s rise, there was a new topic, a new dynamic–a new antagonist. The Republicans were losing, but losing too can be exciting in political TV, if you have a compelling enough Big Bad. Soon enough, Fox’s ratings were rising again like one of Glenn Beck’s Jenga towers.

Here’s the problem for MSNBC right now: the Obama administration is an old story, and not an especially fun one. But with 2016 starting in 2014, like Christmas in July, comes the potential for something equally as good for a politically-driven network’s ratings: a compelling adversary. Negative energy is energy nonetheless.

And with GOP primary season coming up, there is at least the chance that MSNBC’s talkers can array their energy against a truly motivating opponent, or opponents. A Ted Cruz or a Rand Paul threatening to shrink government to the size of a thimble. A Chris Christie, willing to explode on viral video on command and give lefty viewers the fight they want. Or even, God willing, yet another Bush.

Note that I said “there’s a chance.” There is also the chance that none of this will make a difference for MSNBC.

As Wolff points out, Fox had the advantage of being run by a genuine political operative, Roger Ailes, who wants the fight for its own sake and whose palate is keenly attuned to the cuts of red meat that the right prefers at any given moment. MSNBC, despite its outspoken hosts, is run by TV people, who don’t necessarily have that gut sense of what will get the base moving. (A lefty true believer, for instance, would not have Joe Scarborough as MSNBC’s morning host.) The network is programmed for ratings–which, ironically, may not be the best way to get ratings in ideology-driven cable news.

Then too, Fox News has been around for several turns of the wheel. It’s thrived under Democrats and Republicans, up and down times, Clinton through Obama. It has found how to stoke a sense of insurgent, aggrieved outsiderdom among its audience even when its politicians are in office. MSNBC–or rather, the current Lean Forward iteration–has really existed only while Democrats were rising (or at least in charge of the White House). We don’t now yet if it can make programming out of being the feisty down-and-outs–or if its audience will be invigorated or depressed by the approach.

And then there’s this: Hillary could win. And while that might be good news for MSNBC’s faithful, it won’t necessarily make a good new narrative for MSNBC the channel. If Hillary rolls to the nomination and then the Presidency–and doesn’t create some reason to see her as a marked departure from Obama–that doesn’t create a changed dynamic. Which means that any sugar rush that MSNBC’s opinion-driven shows get from the election could be short-lived.

A Hillary win could make MSNBC’s commentators happy, in other words, but the channel itself might be left to snatch defeat from the jaws of victory. 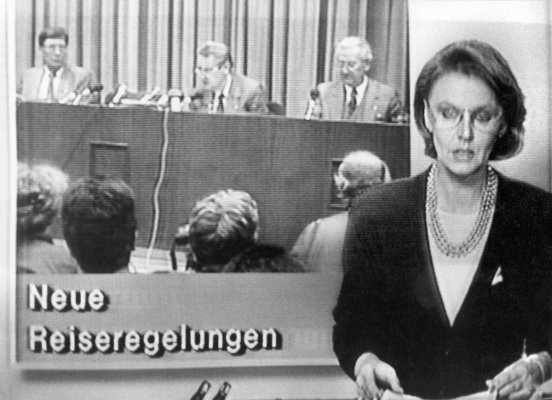 How Journalists Helped to Open the Berlin Wall
Next Up: Editor's Pick