Exclusive: Women Turned Out for Hillary in the Midterms

In the aftermath of the Democratic shellacking, episode 2, in the 2014 midterm elections, many pointed fingers at Hillary Clinton as an electoral loser.

“Somebody should ask Hillary Democrats why they got wiped out tonight. Clearly, Hillary is yesterday’s news,” Sen. Rand Paul, a Kentucky Republican and rumored 2016 presidential hopeful, said in an email to Breitbart News — just one of the many times he linked the Democratic drubbing to the party’s likeliest 2016 presidential candidate.

Added another 2016 potential GOP candidate, Wisconsin Gov. Scott Walker, “I think in many ways [Clinton] was the big loser on Tuesday because she embodies everything that is wrong with Washington,” he told NBC’s Meet the Press on Sunday. Even journalists piled on. “The loser from last night in the a 2016 context: Hillary Clinton,” said Bloomberg’s Mark Halperin.

Not so fast, says pro-Clinton group Correct the Record. The group, linked to Democratic Super PAC American Bridge, compiled polling data that shows Clinton delivered discernible bumps in female support to most of the candidates for whom she appeared or stumped, according to an analysis obtained exclusively by TIME.

Sen. Kay Hagan in North Carolina and Colorado’s Mark Udall both saw three percentage point bumps amongst women after Clinton appeared with them in the final weeks of campaigning, according to an analysis of polls before and after Clinton’s visit by the group.

Though both Hagan and Udall lost, Clinton gave incumbent Democratic Gov. John Hickenlooper in Colorado a turbo charge: his lead amongst women nearly tripled from a 4.8% advantage a to 12% lead after Hillary’s visit, and Hickenlooper eked out a win.

Georgia gubernatorial hopeful Jason Carter got a 4 percentage point bump, though it didn’t help him to victory. And Sen. Mary Landrieu in Louisiana got a 2 percentage point boost, helping her beat out Bill Cassidy 42% to 41%, though she didn’t avoid a Dec. 6 run off.

“Women’s support for Clinton translated to support for the candidates she backed in 2014, despite an overwhelming trend against Democrats in the election,” Correct the Record said in a statement released with the analysis, pointing to Virginia Gov. Terry McAuliffe’s success with female voters in 2013 after Clinton campaigned for him as further evidence of the trend.

Of course, much of this support could simply be women breaking in the final month of the campaign one way or another. It’s impossible to say if Clinton was the deciding factor. And, while support amongst women who voted was boosted in each case, the number of women voting was at the lowest levels since the GOP wave of 2010, meaning that off-presidential year voters were not successfully turned out at the polls.

That said, it’s clear Clinton didn’t have a negative impact on female voters, and her underlying message of women’s empowerment could remain a potent one for 2016, should she run, where women are expected to show up in larger numbers at the polls.

Read next: Another Year of the Woman? Not Exactly 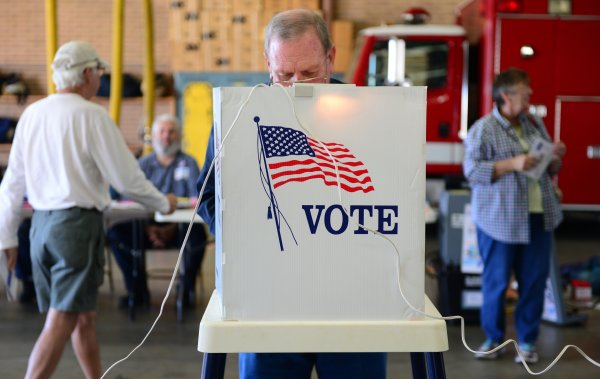