“I’ve been wanting to do this show since the beginning,” says Alfonso Ribeiro of finally getting his chance to star on Dancing with the Stars, which heads into its semi-final round on Monday. “18 seasons have passed and now I’m here and I’m excited and happy to be doing it.” And why did it take so long for the actor to get a chance at taking home the show’s coveted Mirror Ball trophy? “Good question,” he laughs.

Now that the former Fresh Prince of Bel-Air star is there, he’s been making the most of his time on the show, consistently topping the leaderboard and impressing the judges with his fast-paced routines.

While Ribeiro is known for inventing The Carlton dance on The Fresh Prince of Bel Air, when asked if he knew was such a good dancer, he was quick to dispel the notion. “I never thought that this would be as easy as it’s been in terms of picking up the choreography and be able to do it and switch dance styles and make it work,” says Ribeiro. “I had no clue that it was going to be like this. It’s been a lot of fun. I think that is a testament to Witney Carson and her ability to teach me and make it work for me.”

Carson, who recently went salsa dancing with Ribeiro and the cast to celebrate her 21st birthday, is the youngest pro on the show — but Ribeiro, the second-oldest contestant left in the competition, doesn’t mind getting bossed around by a youngster. “It’s not about how old she is, but how much she knows in terms of dance. As long she’s just bossing me around on the dance floor, we’re good,” says Ribeiro. “We laugh about it all the time.”

The partnership has produced some tremendous routines, including a memorable jazz number that incorporated Ribeiro’s famed dance move, The Carlton. Over the course of the show, both the judges and the fans have responded to the good-natured charm and high energy that Ribeiro brings to the dance floor. “The kind of love that I’ve gotten from the fans and the public has been incredible,” says Ribeiro. “With The Carlton dance and doing J. Lo’s ‘Booty’ with the salsa, we’ve gotten a lot a lot of love, and we never really expected that.”

The fact that Fresh Prince fans are still turning out in droves isn’t exactly a surprise for Ribeiro, though. “It’s just a testament to the show and what we were able to do,” he says.

This Local News Reporter Dancing to T.I. Is Everything

Yet Ribeiro is anxious for people to realize that he’s much more than Carlton Banks and his namesake dance routine. “I certainly don’t want people to just think of me as that guy who did The Carlton dance 20-plus years ago,” says Ribeiro, who admitted to having struggled with the character he played on Fresh Prince. “I don’t have a love-hate relationship with it anymore. Now it’s just love for what I’ve done in the past, but there was a period of time where it was difficult and I couldn’t get past the feeling that I was getting typecast and I couldn’t really get the work that I wanted to get, creatively, because of that role.”

Ribeiro and Carson gave the fans what they wanted, namely The Carlton, early in the competition, but there was a strategy behind that decision. “By doing it earlier in the competition, fans were able to experience the entire ride with us,” says Ribeiro. “They found out that I was on the show, because we got so much publicity for doing The Carlton. They could see that and then say, ‘Wow, he’s doing all this other stuff, too, and he’s doing great and he’s having fun and has great energy and a great personality and a great partnership.’ It’s about the journey.”

As for the biggest challenge he’s faced on the show, Ribeiro is quick to say that the biggest difficulties have been physical. “I’ve hurt my toe, I’ve hurt my knee and I’ve hurt my groin and that means that for the past five weeks I haven’t been able to give 100% of my energy and not be able to do anything full out until show time, because I know when I do go full-out I’m going to re-injure it. It’s just this nagging injury that’s been there the whole time,” says Ribeiro. “It’s been hard emotionally, because I want to give it 100%, but I just can’t.”

When asked what he had in store for the semi-finals and, presumable, the finals, Ribeiro hedges. “We’re working on some things. We’re still in the creative process.” But make no mistake: Ribeiro wants to win, and not just to show the producers who made him wait 18 seasons for a chance to compete on the show.

“I absolutely want to win it,” Ribeiro says. “It’s hard to maintain that level of focus. Your body gets tired and your mind gets tired. There will be days where I think, if I make it to the finals that will be fine, and then my very next breathe will be heck no, I’ve got to win this thing. Witney and I are giving it our all every day and I’m hoping that will be enough to get us all the way to the end.”

If it is, Ribeiro already knows where he will put the trophy: “I won another show about 8 or 9 years ago called Celebrity Duets. I’ll put the Mirror Ball right next to that trophy.”

The semi-finals of Dancing with the Stars air Monday at 8/7c. 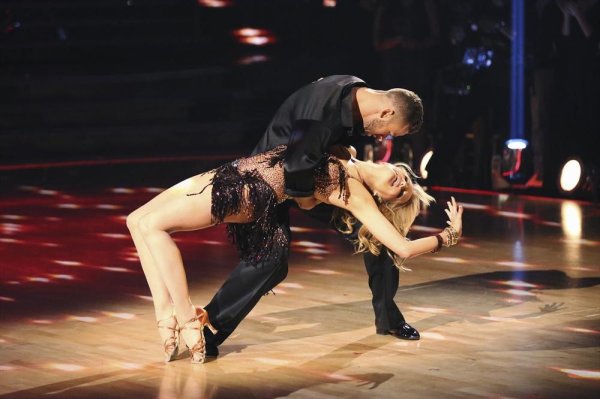