Congress' Lame Duck To Do List: Avoid a Shutdown, Fight ISIS and Ebola

Republican Speaker of the House from Ohio, John Boehner, speaks to the media about the Republican route in the US midterm elections at the US Capitol in Washington on Nov. 6, 2014.
Jim Lo Scalzo—EPA
By Alex Rogers

The exceptionally unproductive 113th Congress returns Wednesday to a pile of overdue bills that must be passed during a not-so-lame duck session. From keeping the government afloat and funding the fights against Ebola and ISIS, to vetting the next Attorney General and battling with the President over immigration, Congress will be busy between now and the beginning of January.

With a Dec. 11 deadline approaching, Congress is looking to pass a trillion-dollar omnibus spending bill to keep the federal government open. Some conservatives are calling for a short-term version that would allow the incoming Senate Republican majority to pass its own budget early next year. Others want an amendment to the bill that would block Obama’s expected move to halt the deportations of potentially millions of undocumented workers.

But top appropriators in both parties hope to get a clean bill that will last through next September, and presumptive Senate majority leader Mitch McConnell has said he will oppose any standoff that could result in a government shutdown. Staffers have been working for weeks to clear the “underbrush,” as House Appropriations Chairman Hal Rogers calls it, so the negotiators can move the bill with none of the drama of recent years.

Also facing a Dec. 11 deadline is Congress’ authorization to take military action against the Islamic State in Iraq and Syria (ISIS). In September, Congress funded Obama’s request to train and arm “moderate” Syrian forces to combat ISIS. In the lame duck period, Congress will consider a more specific clearance for war. While Obama has said he doesn’t need authority beyond the green light Congress gave President George W. Bush to fight terrorism after 9/11, the President announced last week that he would ask for more powers anyway, since ISIS is a “different type of enemy.”

On Friday, Obama said he would send 1,500 more troops to Iraq, nearly doubling the number of American soldiers there to train and advise the coalition forces against ISIS. And Obama has asked Congress for an additional $5.6 billion to “degrade and ultimately defeat” ISIS.

On Monday, Senator Rand Paul (R-Ky.), a member of the Senate Foreign Relations Committee, said in a Daily Beast op-ed that “this war is now illegal,” as the 90 day window provided in the War Powers Resolution of 1973 has expired. “It must be declared and made valid, or it must be ended,” he wrote. “Congress has a duty to act, one way or the other.”

Democrats see a tough fight over a new authorization. “I think there is broad support for going after ISIS as well as Al Qaeda,” says Rep. Adam Schiff (D-Calif.), a member of the House Intelligence Committee who favors new congressional authorization against both terrorist groups. “The challenge is defining the parameters of that authorization. I certainly don’t think that’s going to be easy and it certainly explains the reluctance the Administration has to come to Congress to begin with, but the fact that it is a difficult task doesn’t mean we can ignore our institutional responsibility.”

The congressional authorization to fight ISIS could be folded into the annual National Defense Authorization Act, which has passed every year for the past 53, but House Speaker John Boehner has said that he would prefer to debate the issue after the lame duck period.

President Obama last week added a late-breaking request for $6.2 billion in additional funds to fight Ebola around the world and congressional panels plan to look into how that money should be allocated. On Wednesday, the Senate Appropriations Committee will hold a hearing on the government’s response to the Ebola outbreak; Centers for Disease Control Director Thomas Frieden, Health and Human Services Secretary Sylvia Mathews Burwell and Department of Homeland Security Secretary Jeh Johnson are expected to testify. On Thursday, the House Foreign Affairs Committee will also hold a hearing on the international and U.S. response to the West African outbreak. As of last week there were 13,042 reported cases of Ebola and 4818 reported deaths, according to the World Health Organization.

Obama decided to delay until after the midterms an executive action to provide deportation relief and work authorization to potentially millions of undocumented workers in a move that has been criticized by op-ed columnists and immigration advocates alike as politically-motivated and impractical. With the election over, the question is if and when Obama will move. If he goes before Dec. 11, he could imperil the appropriations process. If he goes afterwards, he could hurt whatever bipartisan efforts he tries to pass—such as new international trade agreements—with a Republican Congress in his final two years. Despite the calls of conservatives, many immigration experts believe that the Administration can act on solid legal ground and Obama may be tempted to move knowing that Republicans have few options to beat back the order before 2016.

Obama announced last week that Loretta Lynch, the U.S. Attorney for the Eastern District of New York, was his pick to replace Attorney General Eric Holder. Top Senate Republicans have said that her confirmation process should wait until next year when they control the chamber. While there are few major critiques of Lynch so far, Senate Republicans have indicated that her confirmation process will include questioning on the President’s expected executive order on immigration. If confirmed, Lynch will be the first African American woman to hold the post.

The House and Senate will hold their leadership elections on Thursday. Both parties expect that their top officials will keep their jobs, but there will be new committee chairs and officials at the helm of the parties’ campaign arms next year. Democratic Congressional Committee Chairman Steve Israel has already announced that he would step down after a brutal cycle and Republican Senators Roger Wicker and Dean Heller look to replace National Republican Senatorial Committee Chairman Jerry Moran. 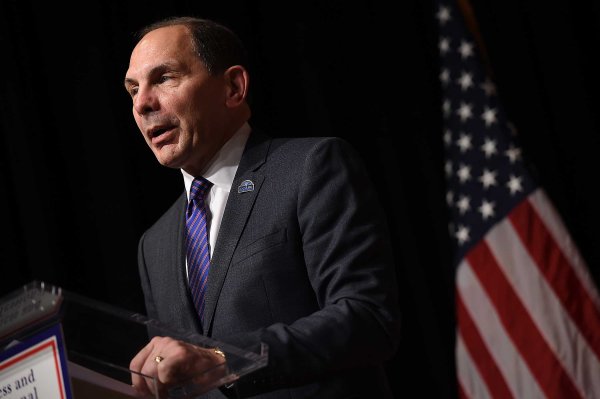