For the final episode of Last Week Tonight for the year, John Oliver focused his sardonic analysis on the lottery. According to the Last Week Tonight team, 44 states have lotteries and some pretty impressive ads to promote them, including a “furry dressed as a cat,” and a newly-minted millionaire using his new wealth to take a penguin hang gliding.

Oliver seemed particularly struck by the fact that lotteries are run by the states, calling the governments to task for what he deemed was akin to running a giant gambling operation that was sold to the public as a charitable donation to state school systems. (It’s for the children!)

He then went deep on who was buying the lottery tickets, revealing that multiple studies have found that lower income households are far more likely to purchase what the states were selling, which is, basically, hope. Despite the fact that, according to Oliver, MegaMillions dreams are “mega unlikely to happen.” One commenter said winning the lottery is as likely as “getting struck by lightning at the same time you’re getting eaten by a shark.”

State lotteries were illegal in this country until 1964, according to Oliver, and it seems like he would outlaw them again.

Last Week Tonight won’t be back on the air until 2015, and he can’t return soon enough. 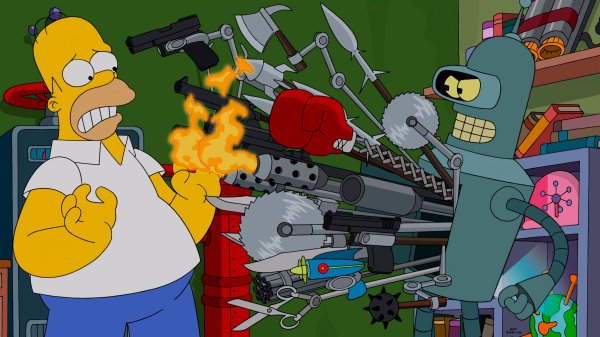 The Simpsons-Futurama Crossover: Not a Classic, But Beats Family Guy
Next Up: Editor's Pick