US Sen. Mitch McConnell, Republican from Kentucky, waves to supporters with his wife Elaine Chao during his victory celebration at the Marriott East Hotel in Louisville, Ky. on Nov. 4, 2014.
Mark Lyons—EPA
By Jay Newton-Small

The weekend before the midterm election, Senate Minority Leader Mitch McConnell and his wife, former Labor Secretary Elaine Chao, campaigned at a restaurant in Montgomery County, east of Lexington. Chao introduced McConnell to the packed house, but after the event was done McConnell sat down to grab a late lunch with a staffer. A woman and her two daughters approached the leader and asked for a photograph. His aide said, “Sure thing, can you just wait until the leader is finished eating?”

“Sure,” replied the women, who then continued to stand, staring at the leader as he ate.

Chao then sat down and she motioned for the woman and her daughters to join her at the other end of the table. And for 10 minutes, Chao engaged the family. “Are you two sisters?” she asked. They shyly nodded.

“I grew up with a lot of sisters, too. There’s nothing better than girl power,” she said, regaling the girls with stories of her five younger sisters and her family, who arrived in the U.S. from Taiwan on a freight ship in 1961, when Chao was eight, fleeing the communist revolution on mainland China. By the end of her stories, the girls were beaming and giggling.

McConnell, 72, was never one for retail campaigning. Childhood polio left him tender and averse to backslapping. To avoid it on the campaign trail, he’ll often grip a person with his left hand on the upper arm, holding them away from him, as he shakes their hand with his right. He’s also hard of hearing, which means in loud rooms he often misses what people say. But on the campaign trail, Chao, 61, makes up for her husband’s shortcomings.

Over the past two years, Chao headlined fifty of her own events and attended hundreds more with and on behalf of McConnell. She also raised “a huge part” of McConnell’s $30 million war chest, says John Ashbrook a spokesman for McConnell. But, perhaps most importantly, she was the campaign hugger.

Dr. Noelle Hunter said she’s formed a “special bond” with Chao over the past year, after McConnell worked to recover Hunter’s eight-year-old daughter, Muna, from Mali, when she was taken there by Hunter’s ex-husband. The political science professor, who was the subject of one of McConnell’s most memorable campaign commercials, was a former Democrat until she met the McConnells at a parade in Paintsville last year in August. “I went to shake her hand and she just grabbed me and held me gave me a mom-type hug,” Hunter said. “She said, ‘We are praying for you to get Muna home.’ She was so warm and gentle. I’d never met her before. I had no idea she even knew about my situation. And it meant the world to me that clearly these two people were talking about Luna over the dinner table.”

Chao is also the one who keeps tabs on various political allies across Kentucky. “She very actively listens. She really pays attention and remembers details about people,” says Kelly Westwood, head of the Kenton County women’s Republican group. “She doesn’t see them for months and then says, ‘I know you sprained your arm, how’s it going?’ Or, ‘How’s you bid for city council going?’ She remembers everything.”

It is perhaps Chao’s personal touch that helped McConnell offset his opponent, Alison Lundergan Grimes’ attacks on him as anti-women. Chao starred in several ads on McConnell’s behalf talking about his record on women’s issues. In the end, McConnell beat Grimes 56% to 41%. “The biggest asset I have by far is the only Kentucky woman who served in a president’s cabinet, my wife, Elaine Chao,” McConnell said at the annual Fancy Farm GOP political picnic in August.

Soon after that event, Kathy Groob, the founder of a Democratic PAC, Elect Women, mocked Chao’s heritage on Twitter. “She’s not from KY… She is Asian and [President George W.] Bush openly touted that,” Groob said. Groob also referred to Chao as McConnell’s “Chinese wife,” and said McConnell is “wedded to free trade in China.”

Groob deleted the tweets and shut down her account. The Kentucky Democratic Party also condemned them.

Perhaps the only thing that really angers McConnell is when Chao is attacked. This has happened before, in 1996, when surrogates for his opponent that year (Democrat Steve Beshear, who is now governor of Kentucky) started saying, “It’s time to elect an All-American family to represent Kentucky.”

“It was a racial slur in my view and it infuriated the Senator,” says Billy Piper, a longtime former McConnell aide, who remains close with the leader. “He is not ever going to take it when she gets attacked.”

Chao is proud of her family’s history. Not only did they struggle against communism in a very personal way, but her father came to the U.S. with nothing and built a multi-million dollar shipping business.

And that legacy of hard work rubbed off on Chao, who wanted to give back to the country that gave her family so much. She graduated from Mount Holyoke and Harvard Business School before becoming a White House fellow in the Reagan Administration. She served as deputy Transportation Secretary under George H. W. Bush and director of the Peace Corps. In the Clinton era, Chao was named the head of the United Way before becoming Secretary of Labor for all eight years under George W. Bush.

McConnell, who married Chao in 1993, often quips: “People remark that I’m in a mixed marriage. I don’t see it that way. In my first marriage, I married a Liberal. Now that was a mixed marriage. With Elaine, she and I understand one another.” 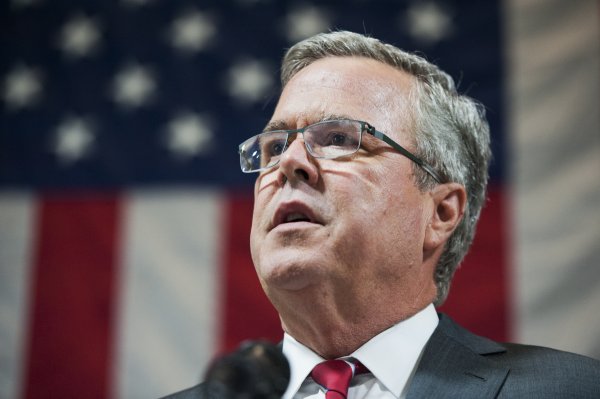