A crowd in front of the Berlin Wall on Nov. 11, 1989 watches border guards demolish a section of the wall in order to open a new crossing point between East and West Berlin in Germany.
AFP—AFP/Getty Images
Ideas
By Brandon Tensley
Tensley is an associate editor for New America, a co-host of Slate’s Outward podcast and a contributing writer at Pacific Standard.

Twenty-five years after the fall of the Berlin Wall, a different wall has taken its place. But instead of separating East and West, this other “wall” is the partition between those who are in German society and those who are on its fringes – namely, non-Western immigrants.

Understanding the origins of this modern wall, which undermines cultural and social stability in Germany as well as in other parts of Europe, requires a look back at the past few decades.

On the one hand, Germany isn’t all that different from other European countries in grappling with growing right-wing populism, which often targets immigrants and has racist undertones. But on the other hand, it is, and in a very obvious way: No other country in Europe knows better than Germany does how racially motivated hatred can lead to violence.

That’s partly why the latest resurgence in anti-immigration and anti-Semitism is surprising, especially to outsiders. Between 2000 and 2007, the neo-Nazi terror cell National Socialist Underground (NSU) carried out a series of racist crimes, including murdering eight Turks and one Greek, all of whom were living in Germany. Thilo Sarrazin’s 2010 runaway bestseller Germany Does Itself In let the genie further out of the bottle, cautioning that immigrants have been steadily destroying German society. In September of this year, Germany’s upper house of parliament approved tighter rules for immigrants from Balkan states, which critics argue will hurt the Roma, also called “gypsies,” who still face government-sanctioned discrimination all across Europe. And this year has already seen more anti-Semitic crimes committed than in 2013, leading some commentators to dub these the worst times since the Nazi era.

So why, in a country that has long since regained respectability in the international political system by coming to terms with National Socialism’s destructive racism, is discrimination against and the exclusion of supposedly “non-German” others still so problematic?

Unsurprisingly, the answers to this question are anything but clear-cut, but they perhaps begin with what was largely poor forethought on the part of policymakers in the mid-twentieth century.

Germany didn’t expect its guest workers, chiefly Turkish laborers who were brought in for the booming post-war economy, to stay permanently. Because Germany kidded itself into believing that it’d never become a country of immigration, there was no serious attention paid to how to integrate immigrants and, eventually, their families. And after the fall of the wall, East Germans, who had lived in a regime that sought to keep contract workers and immigrants separated from civil society (despite the fact that East Germany had a professed commitment to global solidarity), were suddenly expected to have an eye to multiculturalism under an imperfect West German model. So, the government’s focus on the return readiness of its foreign laborers, coupled with the historical burden of even putting a name to racial abuses, have provided some of the necessary ingredients for racist sentiments to take root.

But on a more fundamental level, structural racism, or the normalization of cultural as well as institutional dynamics that privilege whites over people of color, is at play. This isn’t to suggest that Germany doesn’t take the issue of racism seriously; in light of how its dark past still guides and shapes its political culture, this is decidedly untrue. Laws forbid anti-Semitism and Holocaust denial, and Holocaust education is required in all German schools. But is Germany effectively confronting racism, including, in particular, day-to-day racism, both in word and in deed?

The answer is a resounding “no.”

For instance, one would be hard-pressed to chalk up the fact that the violence that was perpetrated by the NSU went unchecked for as long as it did to the incompetence of the police. Rather, the issue is a widespread but rarely discussed problem: For those who don’t fit the bill of what it means to be (or, as is more often the case, look) German, racist tendencies still abound. Indeed, it was an undercurrent of racism against the non-white victims that blinded the police, who believed that the victims were probably criminals themselves, to a lack of evidence for their faulty logic. As for the perpetrators, the police stated in a report that “against the background that the killing of people is a strict taboo in our culture, you can assume that, with regard to their behavioral patterns, the perpetrators must have been socialized far from our local system of norms and values” and that they were likely “from eastern or southeastern Europe (non-Western European background).” It wasn’t until two members of the NSU killed themselves in a chance joint suicide pact near their German hometown of Zwickau that the police connected the dots.

Prejudice aimed at Germans who aren’t of discernable Western European descent isn’t only limited to the criminal justice system, however. Germany’s tiered school system and housing market also draw criticism for discriminating against minority groups. In short, racist assumptions, reflected in state institutions and often sustained by government officials’ lack of political will to limit racial discrimination in multiple arenas, haven’t yet been remedied, and they hardly take center stage on the national agenda – even when they produce murder sprees.

Racism doesn’t just happen on the fringes, and it isn’t merely an individual phenomenon. Even though the German government has worked for decades to own its racist history, racism doesn’t need to be overt to be systemic. Structures are perpetuated in daily culture, education, and media and fuel people to view certain groups of people as “not like us.” Germany, as Europe’s de facto hegemon, has made great strides since the fall of the Berlin Wall only 25 years ago. But only by seeing and confronting the very real problem of racism can it start creating a culture of acceptance and breaking this other wall to tiny bits.

Brandon Tensley is an M.Phil. candidate in European Politics & Society at the University of Oxford, where his research focuses on minority politics and nationalism in Europe. This piece was originally published in New America’s digital magazine, The Weekly Wonk. Sign up to get it delivered to your inbox each Thursday here, and follow @New America on Twitter. 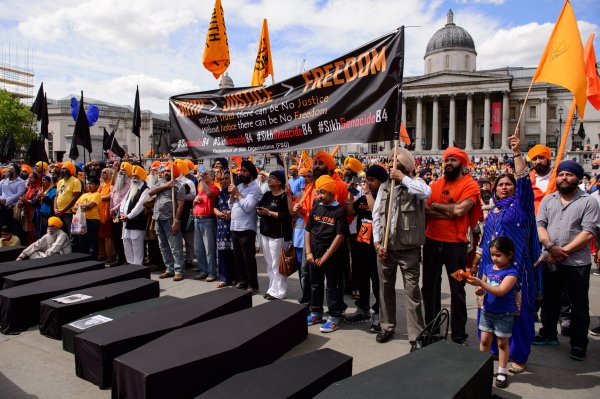 It's Time India Accept Responsibility for Its 1984 Sikh Genocide
Next Up: Editor's Pick