The Simpsons-Futurama Crossover: Not a Classic, But Beats Family Guy

Spoilers for last night’s episode of The Simpsons follow:

Back in the distant past, in another technological era, another century–that is, in 1999–Futurama was supposed to be the next Simpsons. It too was created by Matt Groening; it had Simpsons talent aboard (including producer David X. Cohen); it had a vast cast of characters and a satirical edge. The TV world and animation fans donned their shades on the launchpad and waited for Fox’s next big comedy to take off like a Planet Express rocket.

But Futurama was not the next Simpsons. Fox’s next big animated hit–eventually, after cancellation–would be Family Guy, which also premiered in 1999. It wasn’t the next Simpsons in quality (dear God, no), but it was the more direct, slavish imitation, building itself around a boorish fat guy and his family while cranking up the speed of its non sequitur jokes.

Futurama, on the other hand, was more obviously its own thing. It was a workplace comedy, but it was also, in its weird way, legitimately well-constructed sci-fi. It had The Simpsons’ cynicism about consumer culture–it saw the future as one big drink of Slurm–but it had a darker, less sentimental spirit. If it borrowed anything from The Simpsons, it was the tone of the Treehouse of Horror episodes, with their inspired grotesqueness, free from fealty to Earthbound realism.

Earlier this season, Family Guy aired a crossover episode with The Simpsons–or really, a Family Guy episode with Simpsons characters in it, but with Family Guy-style beats and gags. The whole exercise had an off-putting, “Dad, why don’t you love me!” feel to it, with Seth MacFarlane’s crew expressing sincere affection for the older show, but also seeming to try a little too hard to show they were cool with being a successful franchise that never got Simpsons-sized respect.

It says something, then, that the “Simpsorama,” the Simpsons–Futurama crossover, took place on The Simpsons‘ own air, in its own time slot. Of course, it’s not like there was another option; Futurama finally ended for good (or for now) last year, on its second home Comedy Central. But The Simpsons didn’t just let its spiritual heir crash at its house; it gave it the keys, producing an episode that was much like an episode of Futurama than The Simpsons.

Not a great episode of Futurama, to be totally honest. Compared with Futurama‘s regular-run episodes, which is their own goofy way were built on strict sci-fi plotting logic, dropping Bart’s DNA into a pool of radioactive sludge was a bit of a something-gets-hit-by-lightning crutch. (It was a stretch by The Simpsons‘ latter-year standards of disregarding its own rules of cartoon reality. This really might have worked better as a Treehouse of Horror episode–it even included Kang and Kodos.) And the resulting Homer-Simpson-must-die story was little more than an excuse to put the characters together and take a tour of Futurama‘s greatest hits.

But great hits they were, and for a fan of both shows, “Simpsorama” was at least a way to show how the two series–to borrow the episode’s metaphor–shared DNA but manifest it in different ways. Bender may look like metal Homer with an antenna, but his mercenary trickster personality is distinctly his own. (I could imagine him happily fleecing Moe for free drinks for the rest of his days.) The Simpsons aspects of this Simpsons half-hour mostly receded into the background, allowing a parade of favorite Futurama bits and characters (Lrrr and Ndnd, the Nibblonians, the Hypnotoad, Hedonism Bot–twice!–and a cameo by earlier Groening creation Binky from his comic Life in Hell.)

It wasn’t a classic episode, but–by imagining an alt-universe in which Futurama still shared Fox airtime with The Simpsons–it was a generous one. Toward the end of the episode, as the devil-bunny-Barts were slingshotted into space, Bart said, “You realize you’re cheering the deaths of millions of my children.” Really, “Simpsorama” simply celebrated the life of one of them. 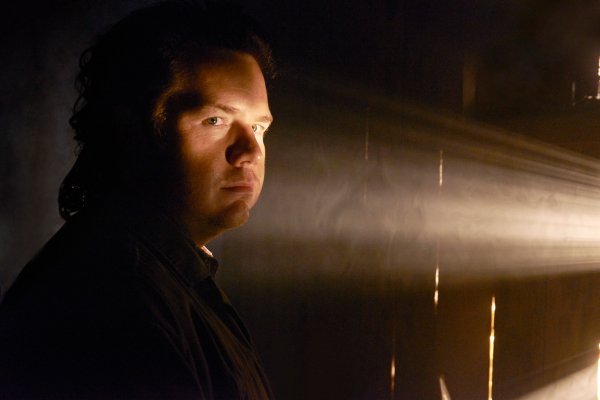 The Walking Dead Watch: 'Self Help'
Next Up: Editor's Pick