Ideas
By Nick Gillespie
Nick Gillespie is the editor in chief of Reason.com and Reason.tv and the co-author with Matt Welch of The Declaration of Independents: How Libertarian Politics Can Fix What’s Wrong with America.

You can forgive Republicans for thinking the midterm elections were all about them. Hell, they picked up seven Senate seats — and legislative control — from Democrats and added at least 10 seats to their House majority (some races are not yet finalized). Controversial GOP governors such as Wisconsin’s Scott Walker and Florida’s Rick Scott withstood tough re-election challenges and more state legislatures are in Republican hands than ever before.

Yet Republicans mistake the meaning of the midterms at their own peril. These elections were a particularly frank repudiation of Barack Obama and the past six years of failed stimulus, disastrous foreign policy, and rotten economic news. Even the President’s historic health-care reform remains a negative with voters. But if the GOP thinks it has a mandate to return to the equally unpopular bailout economics and social conservatism of the George W. Bush years, it too will be sent packing as early as the next election.

A few days before the midterms, just 33% of respondents in an ABC News/Washington Post poll gave the GOP a “favorable” rating, which was 6 percentage points lower than what they gave the Democrats. A whopping 60% said that President Obama had no “clear plan for governing,” but even more (66%) said the Republicans lacked one.

Even as the Republican “wave” was cresting in real time on Election Night, reports my Reason colleague Matt Welch, GOP-friendly Fox News analysts such as Brit Hume, George Will, and Charles Krauthammer didn’t pretend this was a vindication of the party’s agenda for America. “It’s striking how unanimous they are that this election really doesn’t have much to do with Republicans suddenly waking up and smelling the vision,” wrote Welch. “They just didn’t get in the way of a restive electorate during a particularly painful six-year-itch.”

The long-term trends in voter self-identification underscore the electorate’s lack of trust or confidence in either party, but especially the Republicans. In 1988, according to Gallup, 36% of Americans called themselves Democrats. Now only 31% do. Nowadays, just 25% of us cop to being Republicans, down from about 32%. At the same time, a record-high 42% define themselves as politically independent.

As can be gleaned from some of the midterms’ other results, voters want a government that keeps its nose out of our private lives and morality. Alaska, Oregon, and Washington, D.C. all legalized recreational pot and staunchly anti-abortion “fetal personhood” initiatives were voted down in the two states that put the matter before voters (support for Roe v. Wade, the 1973 Supreme Court decision that guarantees a woman’s right to a first-trimester abortion, has remained above 50% for decades). Gallup finds fewer and fewer Americans think the state should “promote traditional values.” Currently, 48% agree with that notion, while an equal number says “the government should not favor any particular set of values.”

At the same time, twice as many Americans think there’s too much regulation of business and the economy as believe there’s too little and 59% think the government has “too much power.” That’s up 17 percentage points from a decade ago.

If the Republicans are actually listening to the voters, they would do well to drop the social issues that they have harped on in the past and focus instead on reducing the size, scope and spending of government. Unfortunately, there’s every reason to believe that the new GOP Congress will be ready to increase spending on the military and old-age entitlements such as Social Security and Medicare. Headlines like “Election Outcome Is Good News for Defense Industry” pretty much tell you all you need to know about Republican attitudes toward the former.

And when it comes to programs that disproportionately benefit seniors while beggaring the rest of us, remember that it was a Republican President and Congress that forced through Medicare Part D, the prescription-drug plan that was as unnecessary as it was expensive. A survey of the campaign websites of incoming Republican Senators found very little in the way of specific promises to cut specific programs but lots of verbiage declaring undying support to “protect” and “preserve” Medicare and Social Security, two of the biggest ticket items in the federal budget.

In his 2012 bestseller The People’s Money, pollster Scott Rasmussen reported that after a prolonged, bipartisan spending binge in which federal outlays grew by 55% in inflation-adjusted dollars, fully two-thirds of Americans supported “finding spending cuts in all government programs. Every budget item, Americans emphatically believe, needs to be on the table.” A week before the midterms, fully 57% of voters were on board for cuts, but only 19% “trust the federal government to do the right thing most of the time.”

The next two years are the Republicans’ time. If they use it wisely, they may well be at the start of a long-term ascendancy. But if they disrespect the rising numbers of independent voters, they will be back in the minority faster than they realize. 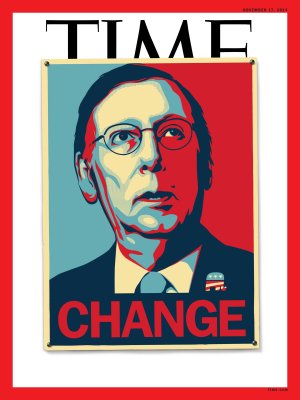