Move Over, Movember, You're Standing on My Mustache

Halfdark—Getty Images
Ideas
By Brian Moylan
Brian Moylan is a writer and pop culture junkie who lives in New York. His work has appeared in Gawker, VICE, New York magazine, and a few other safe-for-work publications.

The days immediately following Halloween should be wonderful. With the costumes packed up, the leaves littering the ground, and the chill growing, November features the slow days of the fall that roll into the mad dash of the holiday season. There are pumpkin spice lattes, cashmere throws and, if you’re lucky, a fire in the fireplace to make you nice and cozy. November is a dream – unless you have a mustache.

Movember is a charitable event where men grow mustaches for the month of November to raise awareness and hopefully money for male cancers (like prostate cancer). It is like the Ice Bucket Challenge for the face, except not nearly as many celebrities do it (and certainly not Anna Wintour). Movember is also a scourge—well, at least for those of us who are proud Mustached Americans the whole year round.

It started already. Today an acquaintance I see regularly said to me, “Oh, look at your mustache for Movember.” While I appreciate people thinking that I’m altruistic enough to raise money for cancer, that is not the case. I have worked long and hard to grow and maintain my furry friend and it certainly did not pop up over the last five days. That’s sort of like visiting a vineyard in Burgundy and saying, “Oh, it’s so cute of you to have planted these grapes last week!” or asking every woman wearing pink in October if it’s for Breast Cancer Awareness month. (Also, what does it say about my friend – or me – that he doesn’t notice one of the more prominent details of my face 11 months out of the year.)

Like I said, raising money for cancer is great, but there is something about Movember that just feeds into the worst aspects of how mustaches are regarded. These days, when you can buy pacifiers that make babies look like they’re sporting lip sweaters or just about everything from notepads to dish soap in the shape of an old-timey handlebar mustache, the facial hair choice for millions is relegated to a joke. The same is true of Movember. It’s a silly stunt to get attention. A beard wouldn’t suffice because they are now so mainstream and connected with virility as to prove indistinguishable, but mustaches, on the other hand, are a punch line. Movember says, “Look at me, I have a mustache. Aren’t I wacky!”

I’m often catcalled on the street for sporting a hirsute upper lip. Some people just shout out, “Mustache!” and point. Others, usually of the drunker variety on weekend nights in the bar-invested blocks of Manhattan, say things like, “Nice Hitler mustache, man.” First of all, there have been countless world leaders from Teddy Roosevelt to Martin Luther King who have sported mustaches, but the one everyone goes back to is Adolph Hitler. And my mustache is what is known as a chevron, similar to Tom Selleck’s, not a narrow toothbrush mustache like Charlie Chaplin’s and, ugh, Hitler’s. All mustaches do not look alike.

But that’s what we equate mustaches with: guys who wear trench coats and expose themselves in public and those responsible for genocide. That doesn’t take into account the many great people who have sported them, including so many of your friends, neighbors, relatives and gym teachers (why were gym teachers always mustachioed?). Sure, John Wilkes Booth had a mustache, but so did Albert Einstein! Why don’t we get credit for him?

And in Movember, all of these issues come to the fore, where so many guys think they are cute and clever for 30 days while they get a little fuzziness around the philtrum. They just make everyone think that all mustaches are ironic, that we don’t wear them to look good or express ourselves, but to try to look cool by looking bad (and maybe to push more jars of our hipster artisanal aioli spread at the Brooklyn Flea).

I have a mustache because it looks good on my face and I like having it. I don’t shout disparaging remarks about your eyeglasses or bangs, or fake having them for a month as some jest (as well-intentioned as it may be). Yes, for the Mustached American, Movember is the cruelest month. Maybe all you Johnny-come-latelies can just make a donation and leave your lips bare. Save yourselves and the rest of us the humiliation. Let’s leave the serious business of having a mustache to the professionals.

Correction: The original version of this post stated that Movember is also known as “No Shave November.” It has been corrected. 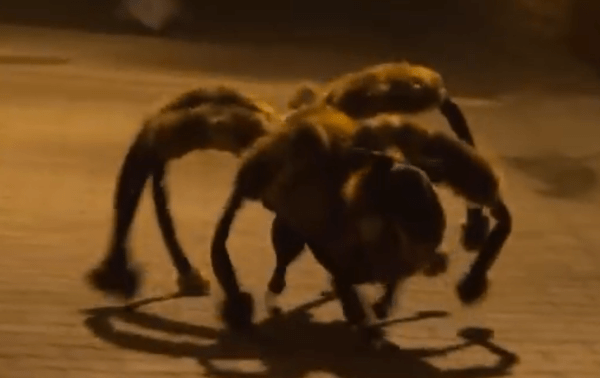 Greatest Prank Ever? These Jokers Put a Giant Spider Outfit on a Dog
Next Up: Editor's Pick