Sen. Jim Inhofe is widely expected to take over the Senate Environment and Public Works Committee now that Republicans have won control of the Senate, putting one of Washington’s most strident climate change deniers in charge of environmental policy.

In his 2012 book, The Greatest Hoax: How the Global Warming Conspiracy Threatens Your Future, the Oklahoma Republican argued that climate change science has been manufactured by liberals to scare the American public, push through anti-business regulations and sell newspapers, and that humans should do nothing to regulate greenhouse gases.

Problem is, Inhofe’s opinions are deeply at odds with the overwhelming consensus of the scientific community, both in the U.S. and abroad. Here’s just a few ways how.

Inhofe: The Senator says hundreds of scientists dispute the idea that global warming is the result of human activity.

Science: 97% of international scientists working in fields related to the environmental sciences agree that current global warming trends are the result of human activity. No U.S. or international scientific institutions of any caliber dispute the theory of anthropogenic climate change.

Inhofe: He says global warming, if it’s happening at all, could be beneficial for humanity. “Thus far, no one has seriously demonstrated any scientific proof that increased global temperatures would lead to the catastrophes predicted by alarmists,” he said in a 2003 speech. “In fact, it appears that just the opposite is true: that increases in global temperatures may have a beneficial effect on how we live our lives.”

Science: The United Nations Intergovernmental Panel on Climate Change (IPCC) has found unequivocally that climate change will have a catastrophically negative effect on humans. In its fifth report, released Sunday, the panel compiled and analyzed hundreds of peer-reviewed scientific studies on climate change from all over the world and found that the consequences of inaction will lead, and already are leading, to flooding, diminished crop yields, destructive weather, and mass extinction.

Inhofe: If global temperatures appear to be warming, that’s just because “[w]e go through these 30-year cycles,” he said on Mike Huckabee’s radio show in 2013.

Science: Dozens of peer-reviewed international studies, including the 2012 State of the Climate peer-reviewed report by the American Meteorological Society (AMS)—which was compiled by 384 scientists from 52 countries—underscored that current warming trends are happening much more rapidly than any natural warming process, and that it is unquestionably the result of anthropogenic greenhouse gases, released by humans burning fossil fuels.

Inhofe: Scientists can’t explain why, eight years ago, “we went into a leveling-out period” in which the earth did not continue to warm.

Science: No such “leveling out” occurred. While individual temperatures spike and plummet every year, climate change science asks a longer-term question: Is the earth warmer than it was fifty years ago? The answer is, again, unequivocally yes. Sea ice has reached a record low, the Arctic has continued to warm, sea temperatures have continued to increase, ocean heat has reached near record-levels and sea levels have reached an all-time high. 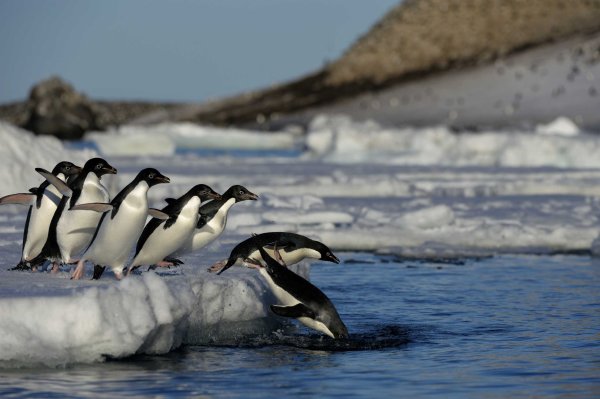 Scientists Get a Little More Creative to Study Penguins Up-Close
Next Up: Editor's Pick