There was a great wail on Twitter Wednesday morning, and it wasn’t about the midterm elections. It was because Benedict Cumberbatch, the hunky British star of Sherlock, got engaged to director and actress Sophie Hunter instead of you.

The same thing happened when George Clooney popped the question to human rights lawyer Amal Alamuddin (although the shock was amplified due to element of surprise because the divorced bachelor had said he wouldn’t marry again). In both cases, there was a immediate gasp — and Twitter despair — followed by fawning over each woman’s considerable accomplishments.

And Sophie Hunter and Amal Alamuddin both have plenty to fawn over. Hunter is an actress (she and Cumberbatch met on the set of the 2009 film Burlesque Fairytales) but she’s better known as a theater director and playwright — she won the Samuel Beckett award for her play The Terrific Electric, and directed operas like The Magic Flute and The Rape of Lucretia. Amal Alamuddin is a well-respected international lawyer who has represented clients like Julian Assange, and specializes in human rights law. In other words, neither is a slouch.

But the initial “gasp” is more interesting. Why is everyone so shocked when movie stars marry non-movie stars? Especially when super-hot, eligible male celebrities marry non-famous women instead of fellow Hollywood royalty?

Because for that first moment, it feels like a modern Cinderella story, especially when the entire Internet is asking “Who’s That Girl?” like gossipy stepsisters at the ball. It’s part of the “beautiful princess plucked from obscurity” thing, an old-fashioned fantasy that manages to co-exist and survive even in a society that’s increasingly skeptical of all things pink and princess-y. The media called the Alamuddin-Clooney wedding a “fairytale,” and the very recent Hunter-Cumberbatch engagement has already taken on its own gauzy romantic aura. And in the 21st century, fame is royalty, so when a movie star pops the question to someone who’s not a red carpet fixture, it’s as shocking as a Prince going around touching people’s feet.

Really, we shouldn’t be surprised at all. All the data suggests that there’s nothing “magical” about either match, and that both actually have a fairly good chance of surviving. Marriages between mature, childless adults with equal status and similar educational backgrounds have the best chances of survival, as my colleague Belinda Luscombe recently pointed out in a piece about Clooney’s marriage. And it seems like the Cumberbatch-Hunter nuptials fit that very same bill.

Still, there’s an embarrassing amount of shock and awe when something like this happens. And if they had had Twitter in those fictional kingdoms once upon a time, there probably would have been a lot of tweets like these:

True, Benedict is dreamy, tall, and looks good in tweed, but this response seems a little extreme. That’s why I think there’s something else going on here: the jealousy isn’t because Cumberbatch is so British and hot, it’s rooted in the fact that Sophie Hunter is a mere mortal, a “civilian.” The same thing happened when George proposed to Amal and when Prince William proposed to Kate Middleton. As Fay Schopen wrote in an essay in The Guardian after Clooney’s engagement, “I, along with legions of others I am sure, have never been able to shake the idea that if Clooney and I happened to meet each other I’d be in with a chance.”

People are jealous because each of these super-eligible bachelors found someone who was “just like us” — but who was not, in fact, any of us. And the fact that we react this way when famous men marry regular women suggests we’re still enthralled by the old fairy-tale of a Prince picking a girl from the crowd and making her a Princess.

It’s also worth noting that there’s not often the same reaction when news breaks that a famous actor is simply dating someone who isn’t famous, like when Clooney dated former cocktail waitress Sarah Larson. It’s the engagement that causes a frenzy. That also ties into Prince Charming narrative — it’s not the love that matters, it’s the “happily ever after.”

So as much as we might think that the Prince Charming fantasy has been injured by feminism and killed by Tinder, he’s not really dead. He’s just back in the movies, which is probably where he belongs. 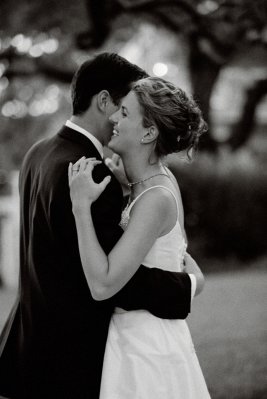 50 Perfect Songs for Your First Wedding Dance
Next Up: Editor's Pick