State Ballot Measures: Highlights From 146 Votes Across the Nation

Supporters for the legalization of marijuana celebrate at the Measure 91 party at Holocene night club in Portland, Ore., on Tuesday, Nov. 4, 2014.
Madeline Stone—AP
By Katy Steinmetz

Beyond choices between Democrat and Republican, Americans were asked to decide the fate of dozens of issues in the midterms, ranging from whether workers should be guaranteed paid sick leave to the morality of bear-baiting. Here are the highlights.

After narrowly defeating a measure to legalize recreational pot in 2012, Oregon voters followed in the footsteps of their neighbors in Colorado and Washington state. Measure 91, which tasks the state liquor commission with setting up a regulated market, makes it legal for residents over 21 to possess and grow marijuana. Alaska passed a similar measure early Wednesday morning. Both boost the efforts of reformers who will be pushing to legalize marijuana in places like California in 2016.

Washington, D.C., also legalized pot, but without setting up a market that allows for pot shops, taxation or sales from one person to another. (See more details here). While a hotly contested measure to legalize medical marijuana in Florida failed, Guam became the first U.S. territory to legalize the substance for medical purposes, and some smaller municipalities also had their say in pot-related polls.

Two personhood amendments, which aim to extend rights to unborn fetuses, failed in North Dakota, 64% to 36%, and in Colorado by the same margin. This is the third time voters in the Rocky Mountain State have defeated such a measure, after rejecting personhood amendments in 2008 and 2010.

A measure in Tennessee that may lead to tougher restrictions on abortion won the approval of voters, 52% to 47%. Amendment 1 alters the state constitution to explicitly state that nothing in it “secures or protects a right to abortion or requires the funding of an abortion.” The passage has no immediate effect but could shape regulations ranging from waiting periods to exceptions for victims of rape.

Minimum wage gets a boost

Voters in San Francisco pushed their minimum wage to the nation-high of $15 per hour, which will be phased in gradually by 2018. But while that issue is aligned with the Democratic streak of Bay Area voters (and exploding cost of living), wins in red-leaning states like Nebraska may mean more for the national conversation.

Massachusetts became the third state in the nation, after Connecticut and California, to mandate paid sick leave for workers. By a margin of 60% to 40%, voters agreed that workers should get one paid hour of sick leave for every 30 they work.

Gun check in the Northwest

Washington voters had dueling ballot measures to decide in 2014: one that would strengthen background checks for those who want to purchase guns, and one that would prohibit the state from instituting any background checks stricter than federal requirements. The former came out on top, with nearly 60% of the vote opting for more restrictions, versus roughly 45% who supported the ban.

A measure that would have ended the long dry spell in Arkansas failed on Tuesday, 57% to 43%. Roughly half the state’s counties will remain free of beer, wine and liquor sales. A similar measure also failed in the town of Hartselle, Ala., for the fourth time in 12 years, by a margin of less than 300 votes. Hartselle remains the largest dry city in Alabama, and Arkansas remains one of the driest states in the nation.

The right to hunt

Voters in Alabama and Mississippi both enshrined the rights to hunt and fish in their state constitutions in 2014, though Alabama passed similar protections in 1996. After those votes, 18 states now have such rights enshrined in their founding documents, according to the National Conference of State Legislatures.

In Maine, voters decided to let controversial bear-hunting tactics stand. A measure that would have banned the use of bait, traps and dogs in bear hunting appeared to have failed early Wednesday morning. Opponents of the practices, who call baiting with food like doughnuts “cruel and unsporting,” lost to proponents who say such means are necessary to control the growing black bear population.

Berkeley, Calif., did what dozens of municipalities have failed to do before: pass a tax on sugary beverages like soda, despite heavy spending from the soda industry. A full 75% of voters approved a 1-cent-per-oz. tax on high-calorie drinks with added sugars, after a months-long fight over the issue. The tax is to be paid by distributors, who could pass the cost onto consumers.

A similar measure in San Francisco, which needed two-thirds majority to pass, fell short with close to 55% of the vote. 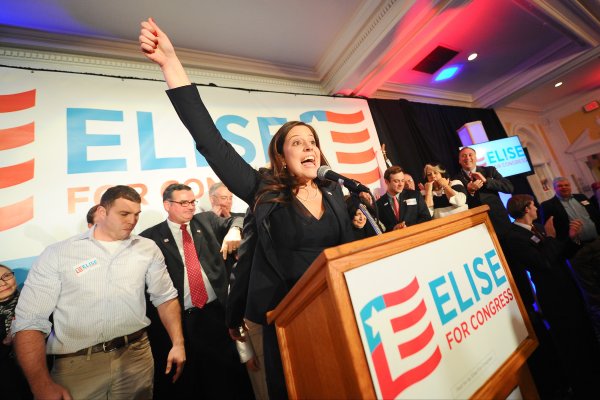