Not Just Sex Workers: Here's What We Know About the Hong Kong Murder Victims

The arrest of young British banker Rurik Jutting, who was charged last weekend with killing two women in Hong Kong, has drawn the world’s attention to the city’s darker side, with current and former financiers coming forward with breathless confessionals of cocaine-fueled nights and easy sex.

But all of that is a world apart from the lives of the two victims — young Indonesian women brutally murdered just days apart in the district of Wan Chai, where posh apartment buildings, like Jutting’s, sit in uneasy proximity to topless bars and sleazy nightclubs.

Both Sumarti Ningsih, 23, and Seneng Mujiasih, 28, first arrived in Hong Kong to work as domestic helpers. They were among hundreds of thousands of Southeast Asians in the city — mostly Thai, Filipina and Indonesian women — who work to support their families back home, or to fulfill a modest dream like building a house or saving for a small business.

Sumarti, from Cilacap, a town in southern Java, was a single mother with only a primary school education, but described as “very thoughtful and smart” by her mother Suratmi, 49. Her parents, who are farmers, tell TIME that she worked as a nanny when she was 18, shortly after she left her husband and gave birth to a baby boy in 2009. Life was a struggle.

“She said she didn’t have enough to eat when she lived with her husband,” her mother tells TIME.

Two years later, in 2011, she went to Hong Kong, leaving her son in the care of her parents. She worked as a domestic helper, managing to send around $250 home every month. That’s more than twice what a girl without much education can expect to make in Java working as, say, a shop assistant or in some similar role.

After working as a domestic helper, Sumarti found a job — illegally — in a Hong Kong restaurant as a waitress. Then she returned to Cilacap in 2013.

She wasn’t there for long. Back in Indonesia, she took a DJ course, and then traveled to Hong Kong at least twice more, staying for months at a time. The most recent, and the last, visit began in August, when she arrived on a tourist visa. On each visit, Sumarti returned to the same restaurant to make money for her son’s education and her parents’ daily living expenses.

Other Indonesian women in Hong Kong take on similar work, particularly those who overstay their domestic-helper visas.

One such overstayer was the second victim, Seneng Mujiasih. Her family lives in Indonesia’s Southeastern Sulawesi province, and she began working as a domestic helper in Hong Kong some years ago, but her contract was terminated in 2011 by her employer.

Finding a new employer meant paying large sums — the equivalent to many months of wages — to an employment agency. Instead, Seneng, known as Jesse Lorena to her friends, chose to stay on and work illegally in Hong Kong, taking on whatever job she could find.

“She wanted to save money to build a house for her mother,” says Eni Lestari, an adviser with the Association of Indonesian Migrant Workers in Hong Kong, who spoke with the victim’s friend. Seneng is said to have lived in a cheap boarding house not far from Jutting’s luxury apartment building, J Residence, where the rent on a 350-sq.-ft. flat costs around $2,800 per month — seven times a domestic helper’s wage.

There are around 6.5 million Indonesians working overseas, sending home $7.4 billion of remittances last year. Many of these migrant workers are women working as domestic helpers in the Middle East and East Asia. Almost half of Hong Kong’s 320,000 domestic workers are from Indonesia.

Although the city offers legal protection to domestic workers, including a mandatory minimum wage and days off, rights activists blame draconian immigration restrictions and Indonesia’s employment regulations for making the women vulnerable to abuse and exploitation.

Newcomers incur huge debts to employment agencies. In a case that shocked the world, Erwiana Sulistyaningsih was tortured for months by her employer before she was sent home emaciated and disfigured in January. Despite her plea for help, her agency had refused to intervene because she still owed them money.

Strapped for cash, mired in debt or simply wishing to earn more, some migrant workers, including overstayers like Seneng, take on other kinds of work, from other cleaning jobs to washing dishes or waitressing in restaurants or, in a comparatively few cases, selling sex. Sometimes they do all of the above, moving fluidly between the lives of sex worker, migrant worker and illegal alien.

In interviews with Indonesian-language media, Seneng’s friends said she had been an occasional sex worker. Sumarti’s mother believes that her daughter was not. “I believe she actually worked, and was not doing anything bad,” she tells TIME. “I know my own daughter. She said she worked in a restaurant, and when I called her, she said she worked from early morning to late in the evening.”

Eni slams the media for quickly and pruriently painting the women as mere prostitutes. “We should understand that nobody come here to work illegally or do an immoral job,” she tells TIME. “They are forced by circumstances to do so.”

Unfortunately, those same circumstances persist for millions of Indonesian women. Every day, at Hong Kong’s glittering international airport, more arrive, with the modest aim of earning enough to feed and house their families.

Sumarti was due to pass through the same airport on her way home on Nov. 2. Instead, back in Cilacap, her grieving parents are now waiting for her body.

“Right now I only wait for the return of my daughter’s body as soon as possible,” says her mother. “I am very shocked, and cannot accept it. Whoever did it to my daughter has to get the heaviest punishment.”

Read next: How to Spot a Sex-Trafficking Victim at a Hotel 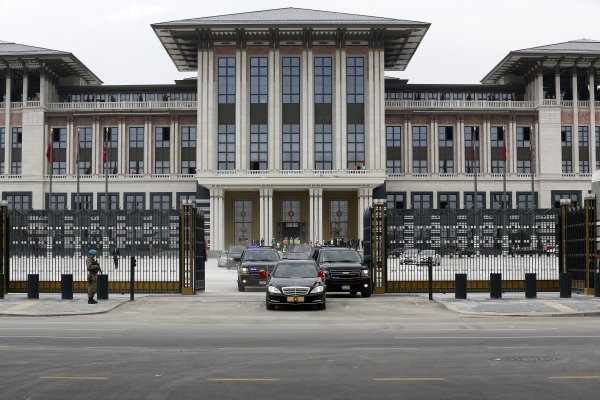 Erdogan's Palace Is Costing Turkey $615 Million
Next Up: Editor's Pick