David Hasselhoff attends a 'Save the Wall' protest at East Side Gallery on Mar. 17, 2013, in Berlin
Luca Teuchmann—Getty Images
By Lily Rothman

I had been in Berlin in 1987 and in 1988 but the first time I really got into what was going on with the wall was in ’89, when my song “Looking for Freedom” was #1 for eight weeks in West Germany. I could go back and forth at Checkpoint Charlie, being an American — though you had to leave by midnight — so I went over into East Germany to do an interview. The interview was supposed to be at the Grand Hotel — it was a massive, ornate, kind of tacky hotel in the middle of East Berlin; it was like black and white outside and color and gold inside — but I felt really pompous there, so we did it outside on a bench, where people were walking by. Three girls came by and they said “David Hasselhoff!” I said, “Yeah, wow, how do you know me?” They spoke very little English. I said, “Do you know me from the man who talks to a car?” They looked at me like I was crazy. They said, “No, you are the man who sings of freedom.” I took a picture with them and I said I was going to try to put it in the West Berlin paper, and that I’d come back the next day if it was in the newspaper. And it was. I met them back there the next day and I said, “Here’s a little piece of freedom.” They started crying. I was hooked.

And then the Berlin Wall mysteriously, through the grace of God, came down. The last time I’d seen my German promoter before that day, I’d asked him when he thought the wall was going to come down. He was just about 60 years old then, and he said, “Not in my lifetime.” I remember that statement. On November 9, he called me and said, “You’re not going to believe this! The wall is down! The people are free!”

I was called to sing that New Year’s Eve on the Silvester show, which was very much like the Dick Clark New Year’s Eve show in America, and I said that maybe I could sing on the wall. I figured they would absolutely say no but they said yes, and they told me I’d be the first person to sing there since 1945. That night it was freezing — like 2° below zero — and they put me in a crane and I went above a million people. It blew my mind. There were people all over the wall, there were people on top of the wall, there was a Bavarian band, people were singing the song in English. I wore this jacket with lights that I had from a show I did with the Osmonds on the Fourth of July; I decided to wear it because I thought maybe the people wouldn’t be able to see me. It became kind of a funny performance — here’s the Knight Rider singing this #1 song about freedom in a jacket with lights on New Year’s Eve — but at the time it was an amazing event. Everybody thought it was freaking cool. Afterwards, we chopped down pieces of the wall and put them all in bags. Now those pieces of wall are now precious and very hard to come by. I put them on plaques and gave them out as gifts to the Baywatch cast and crew at the wrap party, saying, “A little piece of freedom.”

Later, I went back and toured all of East Germany. It was the Freedom Tour and the whole set was the Berlin Wall and a car crashing through it. Touring East Germany was a whole different ballgame — the roads were horrible but the theaters were amazing. They kept up their sports and their theaters and their arts, and this façade of being really hip, but everyone was afraid. It was a different atmosphere, and it’s still a different atmosphere over there now. When went back recently to do a TV special for National Geographic, I found that in East Berlin and the big cities of East Germany it had changed but in the small towns they were still amazed when I saw them. There’s still an adjustment going on socially and economically, I think, though it’s certainly changed 1,000% from back in 1987, ‘88 and ‘89. There were all these people who were so thrilled to meet me and I was over the moon to meet them. I had nothing to do with bringing down the wall, nor did I ever say that. They were the real heroes. I’m just a TV guy who sang a song about freedom.

The theme of Knight Rider was that one man can make a difference — and in 1989 I thought, I have a chance to do something with this. I just happened to be at the right place at the right time. Now it’s turned into something pretty amazing. Twenty-five years later, “Looking for Freedom” is still a song that’s pertinent around the world. People are still fighting for their freedom.

(As told to Lily Rothman) 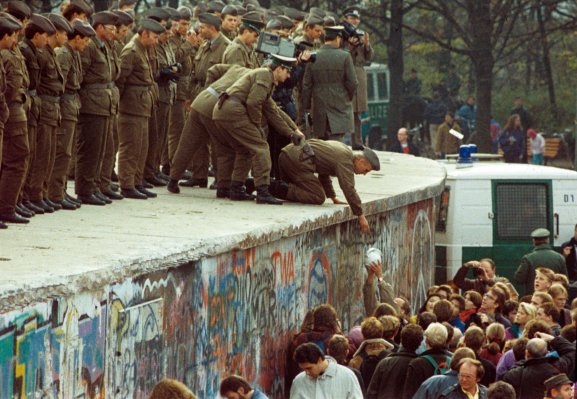 Were You There When the Berlin Wall Came Down? TIME Wants Your Photos
EDIT POST