A Fine Kettle: The Brief History of Fish-Related Crime

Fish at a market, circa 1980
Romano Cagnoni—Getty Images
By Sam Frizell

Fans of The Wire or All the President’s Men will know that the adage “follow the money” is a red-blooded way to make investigating a criminal cash trail sound cool. But why don’t we ever say “follow the fish”?

Fish and crime have long been two arms of an octopus. A recent United Nations report found that child trafficking and drug smuggling are rife in much of the transnational fishing industry, and many fisheries are known to illegally harvest endangered sea creatures. And, of course, if you step on the Mafia’s toes, you can be sure that you’ll “sleep with the fishes.”

On Wednesday, the Supreme Court will hear a case about whether fish can count as tangible evidence in a government investigation. The story is this: seven years ago, a commercial fisherman named John Yates in the Gulf of Mexico was found catching undersized red grouper fish. The officer who caught Yates put the red groupers in crates and told him they would be seized when the vessel returned to port. On the way back, Yates decided to throw out the fish. He was charged with destruction of evidence—investigators, after all, could no longer follow the fish to discover the crime.

The link between fish and crime is an old one. From at least the 1930s until the 1990s, the bustling and very stinky Fulton Fish Market in Manhattan—the second largest fish market in the world after Tokyo’s Tsukiji fish market—was effectively under Mafia control. The hundreds of fish retailers who bought and sold oysters, eel, squid, pike, crab and abalone at the market on Manhattan’s East River were subject to extortion and systematic racketeering, and cash flowed into Mafia and local union coffers. The scheme was this: the Mafia would either physically intimidate fish retailers, truckers and other third parties who relied on the Fulton Fish Market for business, or threaten to leave their fish on the dock to rot. They would then extort fees for using their facilities.

In 1931, a New York attorney named Samuel Seabury helped lead an investigation into a Manhattan District Attorney (Thomas C. T. Crain) who neglected to prosecute the fish market controllers. TIME wrote about it in its April 20, 1931 issue:

Despite enforcement efforts, corruption at the Fulton Street Fish Market really didn’t end until the mid 1990s. TIME wrote about it then, too, as part of a 2004 profile of Joseph Massino, boss of the Bonanno crime family for nearly 15 years. Massino may not have had direct ties to the fishy business on Fulton street, but Vincent “Chin” Gigante, a competing Genovese mob boss, did:

Today the Fulton Street Fish Market has moved to the Bronx borough of New York City and handles about $1 billion of fish each year, having lost its organized crime connection. That doesn’t mean you won’t find anything if you follow the fish—it’ll just be edible. 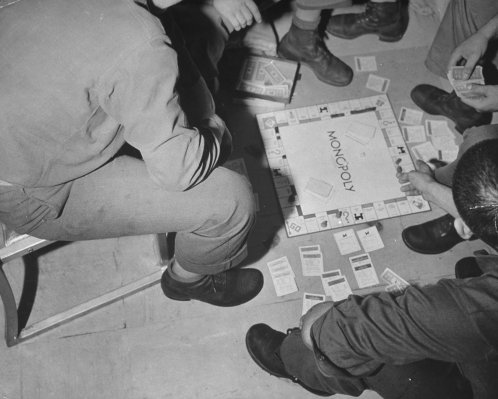 The Most Popular Game in History Almost Didn’t Pass 'Go'
Next Up: Editor's Pick