• In Georgia, a website designed to make the voting process easier crashed on early Tuesday. It has since been fixed, but the crash didn’t sit well with voting rights activists.

• In Connecticut, Democratic Gov. Dannel Malloy, in a close reelection fight, filed for an extension of the voting hours after a number of issues at polling stations were reported early Tuesday.

• A surprise early snowstorm in Maine left tens of thousands without power and a handful of towns scrambling to move polling places at the last minute as a result.

“With so many hotly contested races on the line, it’s disappointing and dismaying to see that eligible Georgia voters are waking up to find one more roadblock on their path to full democratic participation today,” said Rashad Robinson, the executive director of New York-based civil rights organization ColorofChange.org in a statement.

The problems even affected rapper Lil Jon, who cut a popular online video urging young people to “turn out for what.” In a tweet, he said that he never received an absentee ballot.

Throughout the day, poll monitors and hotline workers will be on hand in several states keeping an eye out for issues facing voters. The national Election Protection Hotline had already received 9,027 calls by noon Tuesday, the bulk of which came from Florida and Georgia. The Department of Justice has also dispatched poll monitors in 18 states to “ensure that every voter can cast his or her ballot free of intimidation, discrimination, or obstruction.” 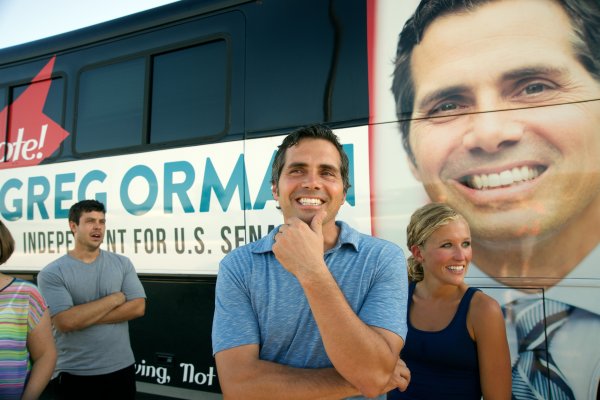 Biden: Kansas Independent 'Will Be With Us'
Next Up: Editor's Pick