TV on the Radio Talks Seeds: 'Much to Our Surprise, We Know What We’re Doing Now'

TV on the Radio recorded their new album, Seeds, far from their usual stomping grounds of Brooklyn. “I loved living in Williamsburg,” says the band’s garrulous frontman Tunde Adebimpe. “But I was in New York for 22 years. I think I can give LA two or three.”

Not that Adebimpe holds any grudges against Brooklyn: “It’s where we grew up, doing what we were doing. It was a really vital time for that area of Williamsburg and the Lower East Side. They were coming on the tail end of perhaps mythologized cultural milestones of the ‘80s. A lot of people at our age at the time — early 20s or 30s—slogged over there at the time and started doing our thing. We just wanted to impress each other, I don’t think we were thinking of any attention from the outside. It was great as a launch pad. I made some great friends there and went through some pretty transformative experiences.”

He does hold one grudge against the changing neighborhood, though: “Go visit the J. Crew that just opened where our studio used to be. We recorded two albums there. Now it’s a J. Crew.”

For their return to the studio, TV on the Radio — Adebimpe, Kyp Malone, Jaleel Bunton and Dave Sitek — set up shop in Sitek’s home studio in Los Angeles, a process that Adebimpe said was surprisingly fun and easy. “It was nice to be somewhere where you’re not exactly on the clock and worried about how much everything is costing you,” says Adebimpe. “It was pretty much the same situation as when we started making music. We started in a loft that Dave and I lived in in Williamsburg. It was super beat up and affordable and we would basically drink way too much coffee and smoke weed and stay up all night making dumb beats and writing a rhythm.”

“It kind of went back to that, except this time the loft wasn’t so beat up and we weren’t as worried about the cops showing up and kicking us all out,” says Adebimpe.

Adebimpe was surprised by how easy it was to record Seeds, the band’s fifth studio album, which is scheduled to be released on November 18. “It was really fun and went really quickly, and I think taking some time off was the key to that,” he says. “Much to our surprise, we know what we’re doing now. It hasn’t always been like that, so it was nice to find out that we could just go do that and have something that we’re really excited and proud of at the end of it. We put ourselves through a self-imposed meat grinder and we’re very happy with the result.”

On the new album, Adebimpe shares songwriting duties with Kyp Malone. “We had about 65 sketches when we came in the studio,” says Adebimpe. “It’s not as crazy as it sounds, because we had some time off between albums.” Three years, to be precise — as the band grieved over the death of bassist Gerard Smith in 2011.

“We’re always writing. Some of them are real sketches for songs and some would be someone humming into the phone for ten minutes,” says Adebimpe. “I recently went into my iTunes to see how many voice notes I had amassed in the last three years or so and there were 7,594.” He doesn’t know how many of those notes became songs, but “it’s definitely not all of them” — even though, he deadpans, “every single one of those voice memos is a hit.”

He brought the last six months of voice notes with him into the studio and they served as the starting point for the album. “We usually narrow it down to about 20 tracks or so, and then pick which 10 or 12 we want to work on,” says Adebimpe. “I think the key to this record sounding the way it sounds and the clarity and simplicity of the songs is that we worked really quickly and didn’t over-think things. If something didn’t get finished in two or three days, we would just drop it. It was quick and dirty.”

“It’s my favorite record that we’ve made,” he says. But is he the sort of person who thinks every record is his favorite at the time of its release? He laughs. “Oh God, no. I really, really want to tour this record, and that’s not a thing I ever say.”

Seeds is due out just as the album that introduced the band to the world, Desperate Youth, turns ten — not that Adebimpe spends much time thinking about the past. “I haven’t listened to Desperate Youth since about six months after we finished it,” says Adebimpe, who admits he just bought all his band’s old albums on iTunes but hasn’t gotten around to listening to them yet. When pressed, Adebimpe admits that he’s still proud of Desperate Youth. “I love those songs and I’m really proud of everything that we’ve done, but it’s mostly really encouraging to realize that we’re still doing this after ten years, or 13 years, really, since Young Liars came out.”

When Desperate Youth was released, much was made of the fact that TV on the Radio was one of the very few predominantly black bands making indie rock. Ten years later, it’s still true. “I feel like it’s changed maybe a hair,” says Adebimpe. “There’s some young bands like Unlocking the Truth and The Bots that are around.” 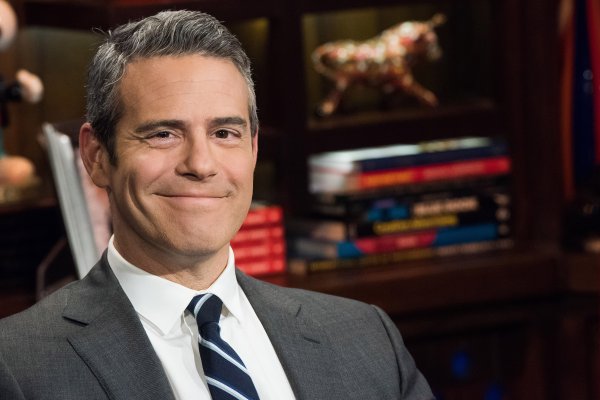 Andy Cohen's Memoir Is the Frankest Book About Gay Life In Years
Next Up: Editor's Pick