Tribal fighters look on as they take part in an intensive security deployment against ISIS militants in the town of Amriyat al-Falluja,in Anbar province on October 31, 2014.
Reuters
By David Stout

The Islamic State of Iraq and Greater Syria (ISIS) slaughtered more than 300 members of a Sunni tribe, including women and children, during the group’s latest killing spree in Iraq’s Anbar province.

Iraq’s Ministry of Human Rights confirmed that 322 individuals from the Albu Nimr tribe, who had reportedly risen up against ISIS’s brutal rule near Heet in the country’s Sunni heartland, were brutally murdered over the weekend.

Although ISIS is itself exclusively Sunni, the Jihadist group is nevertheless quick to dispatch those from its own denomination who refuse to pledge fealty.

The U.S. government was quick to condemn the brutal attacks. “This proves once again that [ISIS] does not represent anything but its warped ideology and provides more evidence, if any were needed, why our coalition partners, including Iraqis from every background, must work together to defeat these terrorists,” Jen Pskai, a U.S. State Department spokesperson, told journalists in Washington on Monday.

However, elders from the tribe blamed the U.S.-backed government in Baghdad for failing to provide weapons to the embattled community as they ran low on supplies.

“The government abandoned us and gave us to ISIS on a platter,” Sheikh Naeem Al Gaoud told the BBC. “We asked them many times for weapons but they gave us only promises.”

The massacre of the Albu Nimr tribe comes as Iraqi forces, in close cooperation with the U.S., are reportedly planning to launch a massive counter-offensive to dislodge ISIS from the territory it controls across northwest Iraq, which includes large tracts of Anbar province.

Iraq’s Sunni tribes played a pivotal role in defeating the earlier incarnation of ISIS during the U.S. troop surge in 2007, which succeeded in drastically stymieing sectarian violence.

But following the withdrawal of U.S. forces from Iraq in late 2011, the country’s Sunni minority complained of being increasingly marginalized by the Shiite-led government in Bagdad, which resulted in renewed bloodshed. Analysts have long argued that Baghdad will likely fail to uproot ISIS without first partnering with the nation’s myriad Sunni tribes. 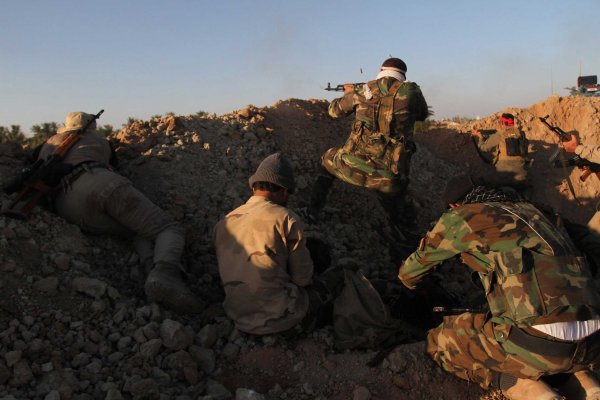