What We Can Learn From Nellie Tayloe Ross, America's First Female Governor

Before there was Sarah Palin or Ann Richards, there was Nellie Tayloe Ross. Ninety years ago today, on Nov 4, 1924, Ross was elected governor of Wyoming, and became the first woman governor in the United States.

Ross was elected a month after her husband, Governor William B. Ross, died suddenly of appendicitis. Her supporters thought it was fitting that the first state to allow equal voting rights (Wyoming passed women’s suffrage in 1869) would also be the first to have a woman governor, and Ross was committed to continuing her husband’s progressive policies. Plus, she wanted the job. Ross was the first woman governor by only a few days — Miriam “Ma” Ferguson, who had also been a state First Lady, was sworn in as governor of Texas just over two weeks after Ross took office.

Ross was inaugurated on Jan. 5, 1925. Eleven days later, when she appeared before the Legislature to review the progress of her late husband, The New York Times ran the headline, “Mrs. Ross Wears Hat Before Legislature,” and noted that she “defied precedent” by “wearing hat and gloves.” Other contemporary media accounts noted that she had “not lost her womanliness” and remained “ever feminine, never a feminist,” as noted in her Times obituary when she died in 1977. “Really, I dropped accidentally into politics,” she told the Times in 1926, saying she preferred to taking a stroll along the boardwalk to discussing rumors of a 1928 bid for the Vice Presidency (which never materialized).

Ninety years later, women politicians are still struggling with the delicate balance of femininity, ambition and power. Even though we may have a woman president sometime soon, female politicians must still be attractive but not too sexy, ambitious but not too scary. And as much as we may want to think that we’re past caring how female politicians look, the recent kerfuffle over Sen. Tom Harkin comparing Iowa Republican candidate Joni Ernst to Taylor Swift proves not much as changed in the last nine decades. That focus on looks is bad for women who aspire to politics. “When [a woman]’s appearance is commented on publicly during a campaign, it undermines her; it actually hurts her,” Senator Kirsten Gillibrand (D-NY) said at the Real Simple/TIME Women & Success Panel in October. “And it doesn’t matter if the comment is positive or negative. It undermines her credibility.”

Ross also had to dispel the idea that she would use her power to rid the Wyoming government of men, and create an all-woman government ( a 1925 man’s worst nightmare). Here’s what TIME reported in 1925 that she told the Associated Press when asked about her view of women in politics:

If Nellie Tayloe Ross were alive today, she’d certainly have some thoughts about #notallmen. 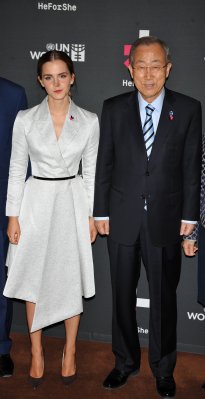 Emma Watson: Feminism Is 'Not Dogmatic,' It's About Having Choices
Next Up: Editor's Pick