How to Understand Republican Strategy: Look to the Vietnam War

People line up for early voting outside of the Pulaski County Regional Building on Nov. 3, 2014, in Little Rock, Ark.
Justin Sullivan / Getty Images
By David Kaiser

War, wrote Carl von Clausewitz, is politics by other means—but for at least 20 years Republicans and Democrats have been fighting a civil war by political means. The Republicans seem likely to win a big victory Tuesday by taking over the Senate. Should they succeed, it will be a new victory for a long-term strategy with a very surprising analog: the strategy that allowed the Viet Cong and North Vietnamese to win the Vietnam War.

In one of his many books on the Vietnam War, the late historian Douglas Pike described the overarching Communist strategy, called dau tranh, or struggle. Although the United States spent many years, billions of dollars and tens of thousands of lives fighting the military aspects of dau tranh, it runs out that the political aspects were always more important. The Viet Cong always had more political workers than soldiers. They conducted motivational propaganda among their own troops, but also infiltrated and did whatever they could to make it impossible for the South Vietnamese government to function effectively. That is why, for example, they tolerated inept South Vietnamese officials who would discredit the Saigon government, but were likely to assassinate effective ones. If they could reduce South Vietnamese society to chaos, they reasoned, the well-organized Communist party could easily take over, and in 1975 the South Vietnamese army and government completely collapsed in the face of the last North Vietnamese offensive. Some years ago, I realized that that the Republican Party has been practicing its own kind of dau tranh for more than twenty years. Recently, the strategy has intensified. It has significantly weakened government at all levels and has a good chance of eliminating the remaining vestiges of the New Deal and the Progressive Era.

Although it is very unlikely that Newt Gingrich had heard of dau tranh when he began his all-out assault on the Democrats in the House of Representatives in the 1980s, he employed a parallel strategy from the beginning. He created a new vocabulary to make his pro-government opponents look corrupt and weak. Grover Norquist’s anti-tax pledge has gotten nearly every Republican in Congress to commit never to increase taxes, hurting the government’s ability to do its work. The Federalist Society has developed a network of lawyers and judges who side against government, and conservative media serve as an echo chamber for those ideas. Since I first noticed these similarities between this strategy and dau tranh, the Republican struggle has continued on many fronts. Oddly, while this attack on government has done a great deal to contribute to our current economic mess, the mess also makes dau tranh more effective, because it undermines confidence in the government. All these tactics spread the idea that government is a powerful conspiracy against the interests of the American people.

Yet despite their rhetoric, while George W. Bush was in power, most Republicans had no choice but to collaborate in the funding and operation of the federal government. Their views changed when a liberal Democrat, Barack Obama, took office in 2009, and Congressional Republicans decided to do everything they could to make his administration fail. In that same year the Tea Party opened its own campaign against government, Democrats and moderate Republicans. The Republican struggle is financed by several networks of donors—including the Koch brothers, who have financed the most extreme candidates. Helped by the recession that Obama inherited, the Republicans gained control of the state legislatures of Michigan, Ohio and Pennsylvania in 2010, and ruthlessly gerrymandered the Congressional districts in those states to assure themselves of majorities for some time to come.

Can Wikipedia Predict the Elections?

Super PACs Are the Big Spenders in the Midterm Elections

Since winning the House of Representatives and taking away the Democrats’ 60-vote majority in the Senate in 2010, Republicans have made it impossible for large parts of the federal government to function. The Surgeon General should in theory be the point person for dealing with the Ebola outbreak, but we have not had one for many months, because the NRA opposes President Obama’s nominee, Dr. Vivek Murthy, and the Republicans have refused to allow a vote on his confirmation. The same tactic brought the National Labor Relations Board to a halt for some months, after the expiration of board members’ terms had left the board short of a quorum necessary to do business. Republicans have used the Congressional investigatory power to create scandals, even though many of them, such as the IRS flap, never lived up to the headlines they generated. Six years of endless propaganda against the Affordable Health Care Act, combined with the problems in its initial roll-out, have made Democrats too frightened to campaign as supporters of it, even in states where it has given many people health insurance for the first time. And since 2011, the Republicans, while forcing further reductions in the discretionary budget of the federal government, have made it impossible for President Obama to do anything significant to speed the economic recovery, much less to strengthen his own constituency with immigration reform.

The genius of the Republican strategy is that it validates itself. Crippling government tends to prove that government does not work, and allows Republicans to argue that the nation would do better with even less government. Democratic administrations on the other hand depend on the idea that government can help the people. Starving and immobilizing the government makes it look ineffective, which seems to validate Republican propaganda. Franklin Roosevelt created the modern Democratic Party by convincing every section of the country, from the agricultural south and the resource-rich west to the urban areas of the northeast and Midwest, that the government could help them. Now that belief has nearly disappeared in most of the Red states, and those states may well give the Republicans control of the Senate.

Some months ago Mitch McConnell told a symposium hosted by the Koch brothers that if the Republicans win the Senate, a Republican Congress will use the budget process to defund every part of the federal government that they do not like—a recipe for even more disorder. That is bound to create an even worse conflict between Congress and the President, and could easily lead to a further government shutdown. By 2016, the country may be so sick of this that it will elect a Republican President just to bring gridlock to an end. That would be the final triumph of several decades of dau tranh. But while the Vietnamese Communists practiced it to put a totalitarian party in power, the Republicans are doing so to reduce the power of government to the minimum necessary for society to function—or perhaps, to below that minimum. Their struggle against governmental authority is not simply a means, but also an end in itself. 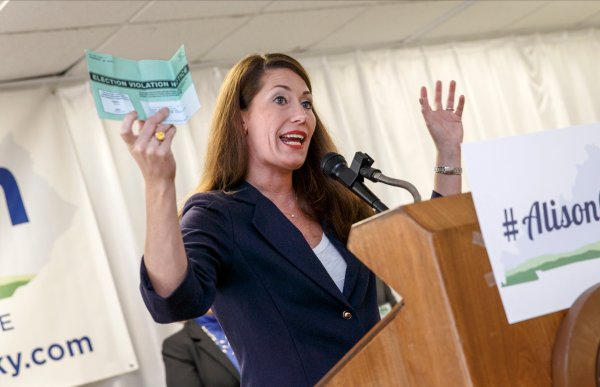