Voters wait in the rain to cast their vote on November 6, 2012 in St. Petersburg, Florida.
Edward Linsmier—Getty Images
By Maya Rhodan

Political types use weather metaphors all the time. Candidates talk about having “the wind at their backs” and worry about “the perfect storm.” Political scientists style themselves as “forecasters,” while journalists talk about the “political climate.”

But it turns out that the weather can have a very direct effect on elections.

A 2007 study found that Republicans benefit slightly from rainy Election Days. According to the study, one inch above normal rainfall on Election Day can result in a 2.5% boost in votes for the GOP. Researchers suggested the weather may have even tilted national elections in 1960 and 2000.

Meantime, a 2013 paper out of the University of North Carolina suggested that bad weather makes voters more risk averse and therefore more likely to support incumbents.

Of course, with early voting become more and more popular, the effects of Election Day weather could be less than they’ve been in the past. More than 17 million voters have already cast their ballots this year.

So what can we expect on Tuesday? Here’s your 2014 political weather forecast.

According to AccuWeather, heavy rain can be expected in parts of Arkansas on Tuesday. If that pushes more voters into the GOP column, it will be bad news for Democratic Sen. Mark Pryor, who’s in a tough fight with Rep. Tom Cotton. On the other hand, the bad weather may make voters want to stick with the familiar, which is doubly true for Pryor, whose father served in the same seat.

Political Forecast: Dark skies for Pryor. He’s down seven points in the Real Clear Politics average of polls, so not even a little rain-related risk aversion is going to save him.

Backers of Republican Gov. Rick Snyder might want to pray for rain in the populous Detroit metro area on Tuesday. According to the National Weather Service showers are likely in the area and across the state on Election Day, which could mean good news for Snyder, who is facing a tough challenge from Democrat Mark Schauer.

Political Forecast: Unpredictable: Snyder and Schauer are neck-in-neck according to a recent Public Policy Polling survey.

Chicago voters could see their first Election Day rain fall since 2004, according to WGN News’ Chicago Weather Center. Other parts of Illinois, where Democratic Gov. Pat Quinn is locked in a tight race with Republican businessman Bruce Rauner, could also see some rainfall. Will the showers keep people from making the trek to the polling booth? Will it boost the GOP, or make voters seek the shelter of the Democratic incumbent?

Political Forecast: Cloudy. The Real Clear Politics average of polls has Quinn up by a mere eight-tenths of one percent, so it won’t take a perfect storm to have an effect on this race.

Weather should be the least of candidates’ concerns in six other states with toss-up Senate races. AccuWeather predicts seasonally appropriate temperatures and clear skies in those states, although rain is expected to creep in late Tuesday in Louisiana. In Colorado, the weather may matter even less, as the state is trying out an all mail-in ballot for the first time.

Political Forecast: No difference. The candidates in these competitive races are going to have to blame something other than bad luck for ruining their picnics if they lose. 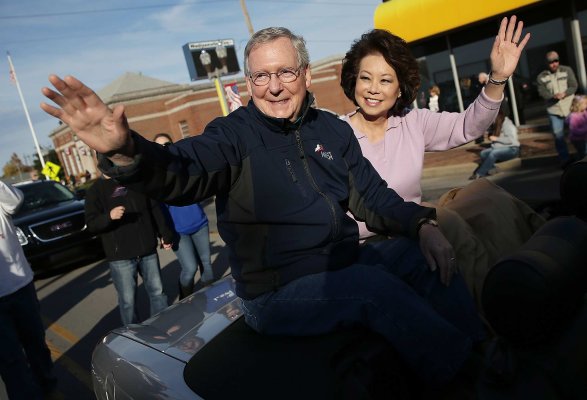