Gehry-mania continues apace in Europe. October saw the launch of the architect’s retrospective at the Centre Pompidou, followed by the grand opening of his ship-shaped Fondation Louis Vuitton in the Jardin d’Acclimatation. Ahead of it all, Wallpaper* HQ recuited the master builder to guest-edit the October 2014 issue.

This week he unveils another project — this time on the first-floor librarie at the New Bond Street flagship of his patron du jour, Louis Vuitton. Following a line of creative luminaries including Cindy Sherman, David Bowie and Harland Miller, Gehry has joined the brand’s program of ‘Curated Shelves,’ a component of its luxurious London maison, which pays homage to the brand’s long tradition of patronage of the arts with specially commissioned works and collectibles. He has hand-picked a diverse collection of classics old and new for a feature wall in the librarie, nodding to each stage of his 50-year career with a literary emblem.

What’s most interesting about the project is, of course, the material Gehry has chosen to represent him in this context. It paints him as an avid consumer of culture with a particular fondness for European thinkers: Camus, Cervantes, Santayana. He is also a generous promoter of his peers, gathering monographs from Vija Celmins, Robert Rauschenberg, Claes Oldenburg and Pierre Boulez, all of them close personal friends.

No single selection is altogether surprising, though as an ensemble they piece together a rationalization for Gehry’s multifaceted postmodern spirit. They also form a worthy canon for a curious creative mind — a canon that any of Gehry’s own monographs could arguably stand alongside.

This article originally appeared on Wallpaper*. 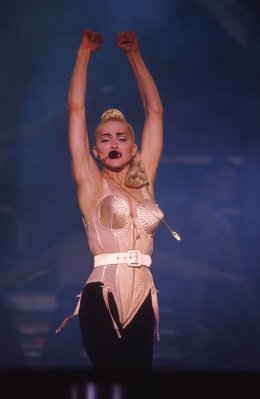 The 14 Most Iconic Bras of All Time: From Mata Hari to Lady Gaga
Next Up: Editor's Pick