If you’re not a comic book fan, you probably hadn’t heard of Captain Marvel before last week — and you likely wouldn’t have guessed that she’s a woman.

Last Tuesday, Marvel Studios announced that the Carol Danvers, a.k.a. Captain Marvel, will be the first female superhero to get her own Marvel Studios movie in 2017. She will be in good company: Both Wonder Woman and a unnamed female character from the Spider-Man universe will get their own treatments that year too.

The decision came as a shock even to the Captain Marvel comics writer, Kelly Sue DeConnick, who after neglecting to return a phone call from her editor, found out through her Twitter feed. She responded by tweeting, “Did not see this coming.” And if the movies stay true to the comic books, the fighter pilot with half-alien DNA and a passing resemblance to Gloria Steinem in both looks and feminist conviction will be a far cry from the damsels in distress audiences have grown accustomed to seeing in superhero films.

The former Air Force pilot — who DeConnick says is meant to have the swagger of record-setting pilot Chuck Yeager — can fly and shoot beams out of her hands. And she fits nicely in the universe of cocky, wisecracking heroes that we’ve seen since the first Iron Man movie: She’s a control freak with a big ego and a quick temper. In fact, Danvers may prove to be a lynchpin in the Marvel universe. In the comics, she’s a member of the Avengers and works closely with the Guardians of the Galaxy. Marvel Studios has yet to announce whether Danvers will appear in either of these series, but it’s safe to assume that tapping someone connected to both universes wasn’t a mistake. Plus it can’t hurt that the company’s name is in her title.

In short: she’s more than just a sexy spandex uniform.

DeConnick has a personal mission to put an end to such reductive characterizations of women in pop culture. “The test that I always give young writers is if you can take out your female character and replace her with a sexy lamp and your plot still functions, you’re doing it wrong,” says DeConnick. “You would be surprised how many times this is actually done. These women are purely there to inspire or motivate or reward or sometimes decorate. I don’t want all of our female characters to be good or to be role models. I just want them to have an interior life. If you can’t answer for me what does this character want in this scene, you’re not writing a woman, you’re writing a lamp. Start over.”

Seems simple, but in the long history of superhero franchises, audiences have seen a lot of sexy lamps. Until recent years, the accepted wisdom has been that young men (the target audience for these superhero films) will not watch movies with a female protagonist. Naysayers cited flops like Catwoman and Elektra to back up this claim.

It’s entirely possible that no one saw these movies because they were terrible (Catwoman scores 9% on Rotten Tomatoes and Elektra scores 10%). But DeConnick also points out that women have been trained from a young age to cross-identify with male characters simply because of the dearth of strong female protagonists in our culture. With thousands of male protagonists on TV and in movies, men have never been forced to do the same. This makes it harder for them to relate to women characters, so studios make fewer movies starring female protagonists, perpetuating the cycle.

“And when you get into the sociology with status, everyone wants to identify up, to aspire up,” she says. “So if you are female and therefore lower status in terms of your cultural power, it’s much more comfortable to identify up with a male hero than it is for men to identify down to a lower status.” That’s problematic given how popular superhero movies are. Marginalizing half the population teaches young girls that men’s values and aspirations should come before their own, DeConnick says, and it teaches young boys not to view the women in their lives as fully rounded human beings. Unfortunately, movie studios are motivated by money, not by equality issues.

But then The Hunger Games and Jennifer Lawrence burned down the box office, and everything changed. Studios started wondering how they could mimic the success of the Girl on Fire. The obvious answer: Superheroes, hence the rush to fill 2017 with potential blockbusters starring ladies with superpowers. And before those movies hit theaters, networks are testing the waters on TV: Agent Carter, based on the female character from the first Captain America movie, will premiere in January and a Supergirl TV series is slated for sometime next year.

The change can’t come soon enough. In 2013 — the year of The Hunger Games sequel and Frozen — just 30% of all speaking roles went to women and only 15% of all protagonists were female. Marvel has done a better job than most at rectifying this issue by featuring kick-ass heroines who pass the “sexy lamp” test as part of the ensemble in several films. Scarlett Johansson’s Black Widow has become a fan favorite after appearances in the Avengers, Iron Man and Captain America films, and Zoe Saldana’s Gamora debuted as the “most dangerous woman in the universe” in Guardians of the Galaxy.

Still, there’s a lot to be desired, even in the most progressive blockbusters. Many critics have said, for instance, that Black Widow is just eye candy in the Avengers movie. “That’s objectively untrue!” says DeConnick. “I think The Avengers is a Black Widow movie. She saves the day. And if you take her out, the plot does not function.”

It’s true that without Black Widow’s success, Marvel never would have greenlit a Captain Marvel movie. But the popularity of Black Widow does not guarantee that Captain Marvel will be successful, especially considering Carol Danvers’ background is as political as it is supernatural. Danvers only became Captain Marvel in 2012 after a push from DeConnick’s former editor Steve Wacker. Before then, she was Ms. Marvel, created in the 1970s with a nod to the feminist publication Ms. Magazine. In one plotline, Carol Danvers leaves NASA to take a job as an editor at Woman Magazine. “She wore oversized glasses and blond, middle-parted hair and neck scarves,” says DeConnick. “It was Gloria Steinem fan fiction in the most literal sense.”

Decades later, Ms. Marvel had lost some of her luster. Wacker liked the character but felt the name was a little dated. He wanted to transform Danvers into a character his daughter would aspire to be, much in the same way his son aspires to be Peter Parker (Spider-Man). “As sappy as it sounds, I couldn’t imagine her or other little girls dreaming of being Ms. Marvel. But Captain Marvel. She sounds like the greatest hero in the world,” says Wacker. The original Captain Marvel had died about 20 years before, and though some characters had picked up the name since (including another woman) none had stuck.

In 2012, the female Captain Marvel premiered to much fanfare and controversy. In fact, Marvel Comics has come under fire several times in the last couple of years for promoting female heroines, including when they gave the old title of Ms. Marvel to a Muslim woman in 2013 and when a woman took up Thor’s hammer earlier this year. “The usual suspects get very angry, and they’re certain Marvel is ruined forever, and then everyone forgets about it and we just keep going,” says Wacker. “It’s been the same way for 75 years.”

Embracing diversity, Marvel executives say, has been a mission of the company since the years of Stan Lee, when the former Marvel president would pen essays about diversity and feminism in the back of the comics. But the imperative has become more pressing in recent years thanks to the Marvel Studios movies. The Marvel name has become more influential than ever and, to quote a Stan Lee Marvel comic, “With great power comes great responsibility.”

But the question still remains: Will she make any money? If Captain Marvel and Wonder Woman fail in the same way that Catwoman did, it will be hard to convince movie executives that it’s worth gambling on female superheroes again.

Wacker isn’t worried. “I think if we can sell a talking raccoon in Guardians of the Galaxy to the masses,” he says, laughing, “we can do this.”

Read next: A Comic Book Dummy’s Guide to the Marvel Universe Plan 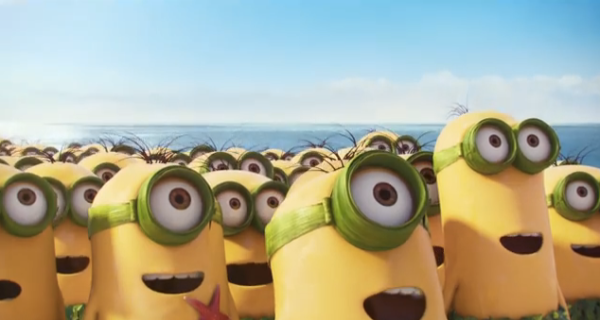 Watch the Trailer for Despicable Me Spinoff Movie Minions
Next Up: Editor's Pick