If Democrats lose control of the U.S. Senate, it won’t be because they didn’t fully unleash the powers available to them in a post-Citizens United v. Federal Election Commission era of politicking.

Senate Majority PAC, the Democratic super PAC dedicated to holding the Senate, has blasted out more than 40,000 Senate-focused television ads this election cycle — more than any other outside spending group.

For context: Senate Majority PAC alone is responsible for roughly one out of every 20 Senate race ads, including those sponsored by candidates and political party committees. In the hotly contested North Carolina Senate race, the super PAC has run more ads than the Republican candidate Thom Tillis, who’s locked in a statistical dead heat with incumbent Democratic Sen. Kay Hagan.

Senate Majority PAC’s dominance this cycle shows Democrats have largely moved past their initial qualms regarding the outside spending frenzy enabled by Citizens United, which empowered corporations, unions and other special interests to raise and spend unlimited amounts of money to directly advocate for and against political candidates.

They are now playing the super PAC game to win. The group’s core contributors are a cross-section of Democratic stalwarts, dominated by billionaires and labor unions with reasons for making sure Democrats continue to control the Senate.

Led by seasoned political disciples of Senate Majority Leader Harry Reid (D-Nev.), Senate Majority PAC has raised more than $53 million this cycle. As of Friday, it had made $47 million worth of independent expenditures — most in the form of TV ads skewering Republican candidates.

Nearly two-thirds of the money — about $34 million— came from contributors giving half a million dollars or more, according to a Center for Public Integrity analysis of contribution records filed with the Federal Election Commission. That’s roughly the same percentage as marquee Republican super PAC American Crossroads, though that group has reported raising just more than $28 million so far this cycle, far less than Senate Majority PAC.

Senate Majority PAC’s spending is a fraction of the close to $700 million the Center for Responsive Politics predicts outside groups will spend on the midterm elections. Overall, CRP expects combined spending by Republican candidates, party committees, and conservative-leaning outside groups to outstrip spending on the Democratic side this cycle.

“[W]e can’t compete in terms of money,” Randi Weingarten, president of the American Federation of Teachers, said in an e-mailed response to questions about the union’s support of Senate Majority PAC. “So, our strategy is to leverage long-standing relationships with groups like the Senate Majority PAC to play big in high-priority races.”

The American Federation of Teachers has contributed $1.95 million to Senate Majority PAC so far this cycle, making it one of the group’s largest benefactors.

All the money and all the ads still may not add up to enough for Democrats to hold the Senate. Several of the Senate races that will decide control of the chamber are still far too close to call. Whatever the result, Senate Majority PAC has been credited with keeping the races close and Democrats competitive.

The results and the lessons of the election are certain to reverberate into the 2016 election cycle, when the White House will also be up for grabs.

Senate Majority PAC’s contributors each have their own reasons for spending to keep Senate Democrats in charge. Take Sealaska Corp., a southeast-Alaska based corporation created by a federal act and owned by thousands of native shareholders. The company contributed $10,000 to Senate Majority PAC in September.

Jaeleen Araujo, the company’s general counsel and corporate secretary, said Sealaska’s board wanted to support the re-election bid of Sen. Mary Landrieu (D-La.), the current chairwoman of the Senate Energy and Natural Resources Committee, because Landrieu has supported the land legislation that is Sealaska’s top priority.

Sealaska is owed lands under the 1971 Alaska Native Claims Settlement Act, and Sen. Lisa Murkowski (R-Alaska) has sponsored a bill that would allow the company to acquire lands outside of those originally designated under the act. Sen. Landrieu is listed as a co-sponsor on an earlier version of the bill. The current version is now awaiting floor votes in both the House and the Senate.

“If you could even understand the effort we’ve had to put into this land legislation over the past four congresses,” Araujo said, adding that Landrieu’s continued support “is just so important to us.”

Araujo explained that she and others called contacts in Washington, D.C., trying to find out which group was best positioned to take a contribution aimed at boosting Landrieu. Araujo said a Washington, D.C.-based board member heard Senate Majority PAC would be a good option. Sealaska said the money was to be used to benefit Landrieu. “We did specify the direction on the check,” Araujo said.

Senate Majority PAC spokesman Ty Matsdorf declined to discuss how it used Sealaska’s contribution, citing a policy of not commenting on fundraising.

Unions and groups associated with unions have so far contributed about $12.5 million, with the single largest amount — $2.75 million — coming from Working for Working Americans, a political action committee affiliated with the United Brotherhood of Carpenters and Joiners of America. Trial lawyers, via the American Association for Justice PAC, contributed $925,000.

Senate Majority PAC touts itself as running a “transparent” operation. But the description, while valid in part, belies the seven-figure amounts of support it’s received from “dark money” operations that don’t generally reveal the root sources of their funds.

For example, Patriot Majority USA, a liberal “social welfare” nonprofit that heavily supports Democratic political causes and doesn’t reveal its donors, has provided it more than $483,000 to cover salaries and insurance, FEC records indicate. Patriot Majority USA is led by a longtime ally of Reid, the Senate majority leader.

Senate Majority PAC has also accepted money from Indian tribes and limited liability companies, including $1 million in September from an outfit called HFNWA LLC. It has addresses in Arkansas and Washington, D.C., and is managed, according to Arkansas Secretary of State records, by Franklin L. Haney, a Democratic political patron and real estate mogul.

It also accepted $500,000 from the Campion Advocacy Fund, a “social welfare” nonprofit group that advocates for wilderness protection and an end to homelessness. The group is affiliated with the Campion Foundation, a private, nonprofit foundation founded by Tom and Sonya Campion. Tom Campion is the founder of the Zumiez clothing store chain. The Campions were listed as cohosts on an invitation to a $25,000-per-person Senate Majority PAC fundraiser in July that featured a dinner with President Barack Obama.

Alaskans themselves have little to do with the funding of Put Alaska First: Senate Majority PAC has provided the super PAC with more than $8.6 million, 98 percent of the Alaska group’s total receipts — a fact that’s hardly obvious to Alaskans watching the thousands of TV ads the group has run to primarily bash Begich’s Republican opponent, Dan Sullivan.

Senate Majority PAC also describes itself as “independent.” But outside observers say the contributor list shows that even though Senate Majority PAC technically is an independent group, its establishment ties and ability to unite Democratic donors under a big-money tent show how closely it is connected to party leaders.

“Senate Majority PAC is run by a couple of Democratic aides, it has close ties to the leadership, to Harry Reid. It’s almost as if this is the return of ‘soft money,’” said Bill Allison, editorial director of the Sunlight Foundation, which monitors money in politics, referring to unlimited contributions to national parties that were banned in 2002. “What this looks like to me really is, if you go back and look at the soft money donors, this is who a lot of them are.”

In all, the Center for Public Integrity reached out to nearly three dozen of Senate Majority PAC’s contributors. Many declined to speak for the record, although others explained why they’re supporting the group.

Heather Podesta, a lobbyist and prominent Democratic fundraiser who said she is on Senate Majority PAC’s board, has herself given $25,000 this cycle. She pointed to the super PAC’s successful record from the 2012 elections as proof of its effectiveness and as something attractive to donors.

“I would say that one of the reasons why these races are as close as they are and we haven’t seen Republicans break out as expected is the hard diligent work of Senate Majority PAC,” she said.

Elizabeth Simons, president of the Heising-Simons Foundation and the daughter of James Simons, the founder and former CEO of hedge fund Renaissance Technologies, explained in an email why she gave Senate Majority PAC $900,000, her largest-ever political contribution. Her father, a prominent Democratic donor, gave $2 million.

“This year I felt I had no choice in light of Supreme Court decisions that have collectively had the effect of handing political power to the rich and disenfranchising large swathes of Americans, primarily Democrats,” she said. “I am now a player in this sad game, but the other side has deep pockets, and so I decided to dig into mine.”

More than 230 candidates, political committees and nonprofit organizations have combined to run about 908,000 U.S. Senate-focused TV ads through Oct. 27, according to a Center for Public Integrity analysis of data from Kantar Media/CMAG, an advertising tracking service.

The vast majority of Senate Majority PAC’s ads attack Republican candidates as opposed to promoting Democratic candidates. Only the Democratic Senatorial Campaign Committee — a national party committee founded in 1916 that, as its name implies, exists specifically to elect Democrats to the Senate — has aired more TV ads this cycle than Senate Majority PAC, with more than 51,000 and counting.

That’s more than any single super PAC, nonprofit or political committee has run in any one U.S. Senate race this cycle. And almost all of the ads have attacked Tillis — and Tillis’ own campaign only days ago cracked the 10,000 TV ad mark.

For perspective: Only five other super PACs or nonprofit groups this cycle have produced as many Senate race TV ads — across all 36 races in play this year — as Senate Majority PAC has in North Carolina alone.

In New Hampshire, for example, the super PAC was already girding in July for close race between incumbent Democratic Sen. Jeanne Shaheen and her Republican challenger, former Sen. Scott Brown of Massachusetts.

Even though Brown had yet to secure the GOP nomination at that point — he won the Republican primary in September — Senate Majority PAC was booking TV ad time for late October and early November, according to Federal Communications Commission filings.

That includes an around-the-clock presence on WMUR-TV 9, New Hampshire’s only in-state, network-affiliated station, through today, the day before Election Day, FCC documents show.

It’s the same story in North Carolina, where Senate Majority PAC is slated to spend well into the six-figure range roughing up Tillis during the final days of the state’s U.S. Senate campaign.

At WSOC-TV 9 in Charlotte alone, Senate Majority PAC has reserved more than $218,300 worth of 11th-hour air time at all times day and night, during shows that range from “Good Morning America” and the local evening news to soap opera “General Hospital” and crime drama “Castle,” according to filings with the FCC.

In some ways, it makes sense that Senate Majority PAC has emerged as a dominant force in the world of super PACs.

Senate Majority PAC is descended from Commonsense Ten, one of the groups that originally prodded federal regulators to rule that corporations and labor unions could donate unlimited money to super PACs.

Big money, it turns out, is embedded in Senate Majority PAC’s DNA. 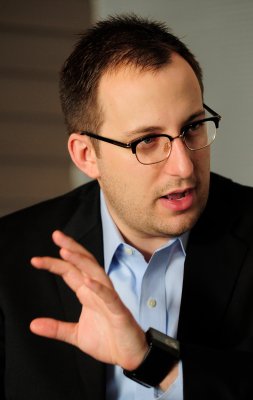 Obama Digital Guru to Democrats: Stop Being Lame
Next Up: Editor's Pick