Residents in Lewiston, Maine may have seen an unusual Halloween decoration this year: a mobile billboard, towed around town on the bed of a truck, featuring a face screaming in horror and, in spooky-squiggly script, the words “Marijuana: Less toxic! Less addictive! Less scary than alcohol!”

The ad is part of the campaign to legalize marijuana in the small New England city, one of a handful of places where measures easing restrictions on the drug are on the Nov. 4 ballot. In Alaska, volunteers are going door to door in below freezing weather. In Oregon, where voting is done by mail, legalization supporters are using a Facebook app to nudge their friends who haven’t put their ballots in the post. Legalization advocates see the mid-term votes as a chance to set the stage ahead of larger fights to legalize marijuana in 2016, where it may be on the ballot in California.

Here’s a rundown of the key votes on marijuana this year, which are all hovering in toss-up territory:

Alaska: Legalization with tax and regulation

Ballot Measure 2 would concretely legalize retail pot, giving the state the power to tax and regulate the substance like Colorado and Washington. Two recent polls show the electorate bending in opposite directions. One found that 57% of respondents support the measure, compared to 39% who oppose; another found that 53% of Alaskans would vote no on the measure, compared to 43% who said they would vote yes.

“It’s very much looking like a coin flip,” says Taylor Bickford, a spokesman for the campaign supporting legalization.

Oregon: Legalization with tax and regulation

Oregon has been down this road before. In 2012, state voters rejected a measure to legalize pot 56% to 44%. This year, more activists have been on the ground asking people to support the pro-legalization Measure 91, an effort funded partly by the deep-pocketed Drug Policy Alliance. The chances of passage here may be better than Alaska, but it’s still no lock: the most recent poll shows 46% of voters opposing the measure and 44% supporting it. The numbers have long hovered around 50%.

All the campaigns are hoping for young people—who are generally more supportive of legalization—to turn out, despite their habit of staying home in non-presidential election years. “The young and young at heart are going to be important for us to pass this measure,” says Brad Reed, a spokesman for the Yes on Measure 91 campaign. “What’s clear from all of the polls is that it’s going to be a very close race.”

Initiative 71 falls short of creating a government-regulated, taxable pot market like the ballot measures in Alaska and Oregon. But it would push the nation’s capital into decidedly cannabis-friendly territory, allowing people to possess up to 2 oz. of marijuana and cultivate up to six plants at home without facing criminal or civil penalties. Polls have shown locals supporting the measure by nearly 2-to-1.

The question is not so much whether it will pass as whether it will stand. There remains a disconnect between the reaches of the local and federal governments in the District—the substance would remain illegal in the roughly one-fourth of D.C. on federal land—and Congress could choose to intervene, passing laws that supersede the actions of D.C. officials. Though Congress has held hearings about D.C.’s past pot-related decisions, like decriminalizing marijuana, passage of this measure may spur more than talk. Marijuana is, after all, still illegal under federal law.

Voters could make Florida the 24th state to allow medical marijuana. Despite the lack of history at stake, the campaign for Amendment 2 has drawn millions from big spenders on the left and right, including casino magnate Sheldon Adelson. It’s also an issue splitting the gubernatorial candidates in a very close race, with Democrat Charlie Crist in favor of legalization and Republican Rick Scott against it.

Because it’s a constitutional amendment, the measure requires a 60% supermajority to pass, which is a tall order. Surveys have been all over the place during the campaign, but a Tampa Bay Times poll conducted in mid-October showed 48% of people supporting legalization of medical marijuana, compared to 44% opposing.

In 2013, Maine’s largest city, Portland, legalized recreational marijuana. The vote essentially gave police the power not to prosecute anyone for possessing up to 2.5 oz. of weed, though the sale and purchase of marijuana remain illegal. And some police prosecuted people anyway, drawing on the authority of a state that still views the drug as verboten.

Following Portland’s lead, two other cities have measures loosening marijuana restrictions on Tuesday’s ballot. Residents in Lewiston, Maine’s second largest city, and South Portland, Maine’s fourth largest city, will vote on laws similar to the one Portland passed last year. It’s not exactly polling data, but David Boyer of the Marijuana Policy Project, a legalization advocacy group, says the driver of the Halloween billboard has been lousy with thumbs up. “It’s been creating a real buzz around town, if you will,” he says. 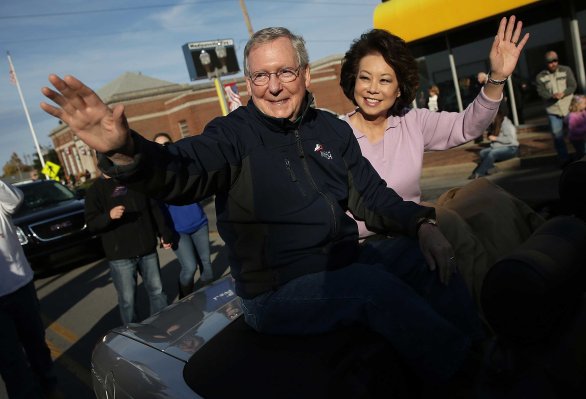 GOP Poised for Senate Win
Next Up: Editor's Pick