What You Need to Know About the Unrest in Burkina Faso

The West African nation of Burkina Faso grabbed rare international headlines this week as thousands of people amassed in its capital, Ouagadougou, to protest plans to keep their longtime leader in office. After days of unrest that included setting Parliament ablaze, overrunning state TV broadcasters and deadly clashes with security forces, President Blaise Compaoré stepped down Oct. 31 after 27 years in power. Army Chief Gen. Honoré Nabéré Traoré quickly announced he would fill the void and said elections would take place within a year.

What are the basics about Burkina Faso?

Burkina Faso, which is densely populated with more than 17 million people and ranked by the United Nations as one of the world’s least-developed countries, shares borders with six countries: Mali, Niger, Benin, Togo, Ghana and Côte d’Ivoire.

The country gained independence from France in 1960 and would suffer from five military coups in the first few decades that followed. It was known as Upper Volta until 1984, when it was renamed Burkina Faso, meaning “land of upright/honest people.”

Who is Blaise Compaoré?

Compaoré served as minister of state under President Thomas Sankara, who ruled from 1984 until 1987. Compaoré seized power when Sankara and 12 other officials were killed in mysterious circumstances by a group of soldiers.

He subsequently won four presidential elections, most recently in November 2010, although only 1.6 million Burkinabés (less than a tenth of the population) voted. This latest term was supposed to be Compaoré’s last, but Parliament was considering a bill this week to remove the constitutional limit, igniting the masses. (The President’s plans to extend his term in office in 2011 also led to the popular protests.)

Why does his step-down matter?

Despite his low international profile, Compaoré was a key ally of the U.S., helping in the fight against al-Qaeda affiliates operating in the Sahel and the Sahara by allowing the Americans to operate a base in Ouagadougou. France, as a former colonial power, also has Special Forces troops based in the country.

Burkina Faso’s geopolitical position also meant that Compaoré held notable diplomatic influence in the region and frequently acted as a mediator in West African conflicts, including those in Mali and Côte d’Ivoire. A report from the International Crisis Group in July 2013 said that the collapse of Burkina Faso’s diplomatic apparatus would “mean the loss of an important reference point for West Africa that, despite limitations, has played an essential role as a regulatory authority.”

The report added that Compaoré “has put in place a semi-authoritarian regime, combining [democratization] with repression, to ensure political stability,” yet suggested this system was both unsustainable and unlikely to allow for any smooth transition after his departure.

The toppling of Compaoré’s government is likely to bring a new challenges to the West by creating even more instability in the region and, potentially, a space in which extremist groups could flourish.

The White House expressed deep concern over the deteriorating situation this week and urged “all parties, including the security forces, to end the violence and return to a peaceful process to create a future for Burkina Faso that will build on Burkina Faso’s hard-won democratic gains.” France, which welcomed Compaoré’s resignation, also called for calm and urged all actors to exercise restraint.

Reflecting on the week’s events, an official from the influential opposition party Movement of People for Progress (MPP), Emile Pargui Pare, told AFP: “October 30 is Burkina Faso’s Black Spring, like the Arab Spring.” Other commentators have also compared the demonstrations here with the Arab Spring, the wave of revolutionary protests and clashes that began in Tunisia in December 2010. Back in 2011, Burkinabés held up signs comparing Compaoré to the ousted Tunisian ruler, Zine el-Abidine Ben Ali.

The political events in Burkina Faso are likely to resonate across the continent, where several national leaders are due to step aside soon, including Rwanda’s Paul Kagame, who has hinted at extending his term as President. And on Wednesday in Benin, nearly 30,000 opposition supporters demonstrated in the streets of the country’s largest city, Cotonou, to push for local elections that were due in March 2013. 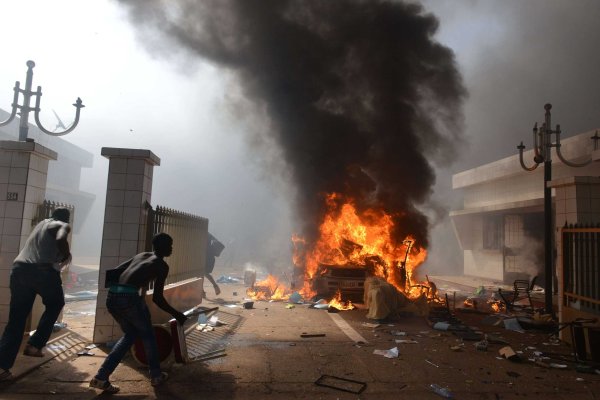 Images From the Protests in Burkina Faso
Next Up: Editor's Pick