Here's Your New Reason to Demand a Treadmill Desk

Active workstations do more than just burn on-the-clock calories, finds a new study in the Journal of Occupational Health Psychology. Standing desks and treadmill desks might make you healthier while also improving mood and not interfering with work.

Study co-author Michael Sliter, PhD, assistant professor of psychology at Purdue University-Indianapolis, wondered if active workstations were good for anything but caloric expenditure on company time. “That would be of limited value if people actually performed worse, were stressed out when they were doing it, or got bored of it,” he says. So the study assigned 180 people to one of four workstations: a seated desk, standing desk, treadmill desk or cycling desk. After a bit of practice, they did 35 minutes worth of tasks. Researchers measured their performance and how much they liked their workstation in reported levels of boredom, stress, satisfaction and how engaged they were in the task.

MORE: This Hamster Wheel Treadmill Desk Is the Ideal Way to Make Your Coworkers Hate You

“We were able to show that these active workstations have psychological benefits without performance detriment,” says Sliter—for the most part, that is. People at treadmill desks were less bored, less stressed and more satisfied than those at seated, standing or cycling desks. In terms of how well people were able to do their job, everyone performed equally except for the desk cyclists. Turns out, Sisyphean pedaling while whizzing through Excel spreadsheets doesn’t do your work performance or mental health any favors: desk cyclists generally performed worse and were less satisfied, though Sliter says they were probably too uncomfortable to be bored.

“It was kind of funny watching people, because you could actually see their arms moving up and down while they were pedaling,” says Sliter, who walks on his treadmill desk about three hours a day. “We found that you can’t really work very well when you’re also pedaling.”

Being active at work is one way to combat the dreaded sitting-desk syndrome: loads of research shows that seated desks are a ticking time bomb for your health. This new study shows that standing up to sitting at work has more than just physical benefits—it might help your mind, too. 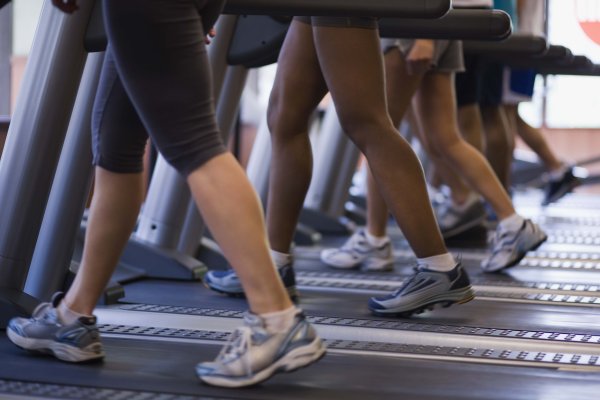 The Drug-Free Way to Fight Depression
Next Up: Editor's Pick